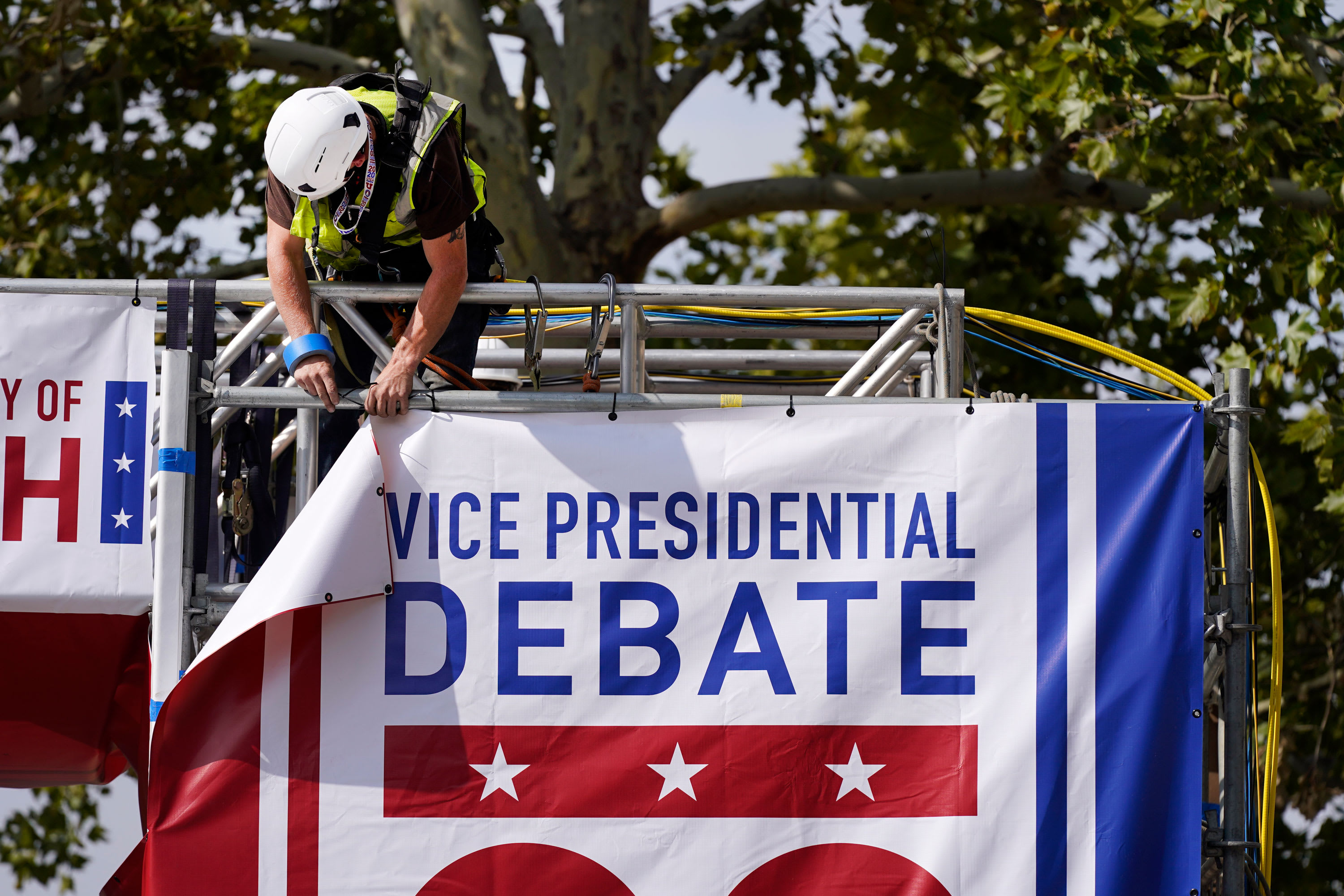 A worker hangs a banner as preparations take place for the vice presidential debate outside Kingsbury Hall at the University of Utah, Monday, Oct. 5, 2020, in Salt Lake City.Patrick Semansky | APA plexiglass barrier will separate Vice President Mike Pence and Sen. Kamala Harris at their vice presidential debate Wednesday, the second such measure taken to reduce the risk of coronavirus transmission on the heels of President Donald Trump contracting Covid-19.A person familiar with the debate planning told NBC News that the California Democrat Harris’ campaign asked for the plexiglass to be used at the showdown at the University of Utah in Salt Lake City, and that the Commission on Presidential Debates approved the request.A fact sheet distributed by the commission said, “Plexiglass will be used as part of the CPD’s overall approach to health and safety.”The sheet also said that  “everyone in the debate hall will be subject to a variety of health safety protocols, including COVID testing and mask use.””If anyone does not wear a mask, they will be escorted out,” the sheet warned.At last week’s first presidential debate at Cleveland Clinic between Trump and former Vice President Joe Biden, the Democratic nominee, members of Trump’s family, including first lady Melania Trump and his adult children, and others in his entourage did not wear masks, despite masks being mandated by rules agreed to by both mens’ campaign.Politico first reported that the plexiglass would be used at the vice presidential debate.The news outlet said that the Pence campaign opposed the precaution.Pence’s spokeswoman, Katie Miller, told NBC News, as she told Politico, “If Sen. Harris wants to use a fortress around herself, have at it.”Miller herself was diagnosed with the coronavirus in May.The debate commission said that the centers of the chairs for Pence and Harris would be positioned slightly more than 12 feet away from one another, as opposed to the original plan to have them seated 7 feet from each other for their first and only face-to-face showdown.Trump disclosed Friday that he and Melania Trump had tested positive for the coronavirus. Biden and Pence both jave tested negative for the virus since then.In addition to the Trumps, at least 16 other people in the White House or who have attended the Trump-Biden debate or Trump-related events have been diagnosed with the coronavirus, including the president’s campaign manager, Bill Stepien, top Trump advisors Hope Hicks and Kellyanne Conway, White House press secretary Kayleigh McEnany and Republican National Committee Chairwoman Ronna McDaniel.Over the weekend, Jaime Harrison, the Democratic nominee for the Senate in South Carolina, brought his own plexiglass barrier for his debate with incumbent Republican Sen. Lindsay Graham.

‘No Time to Die’ pushed to April 2021
FDA grants emergency clearance for GenMark test that screens for the flu, coronavirus and other viruses
To Top
error: Content is protected !!