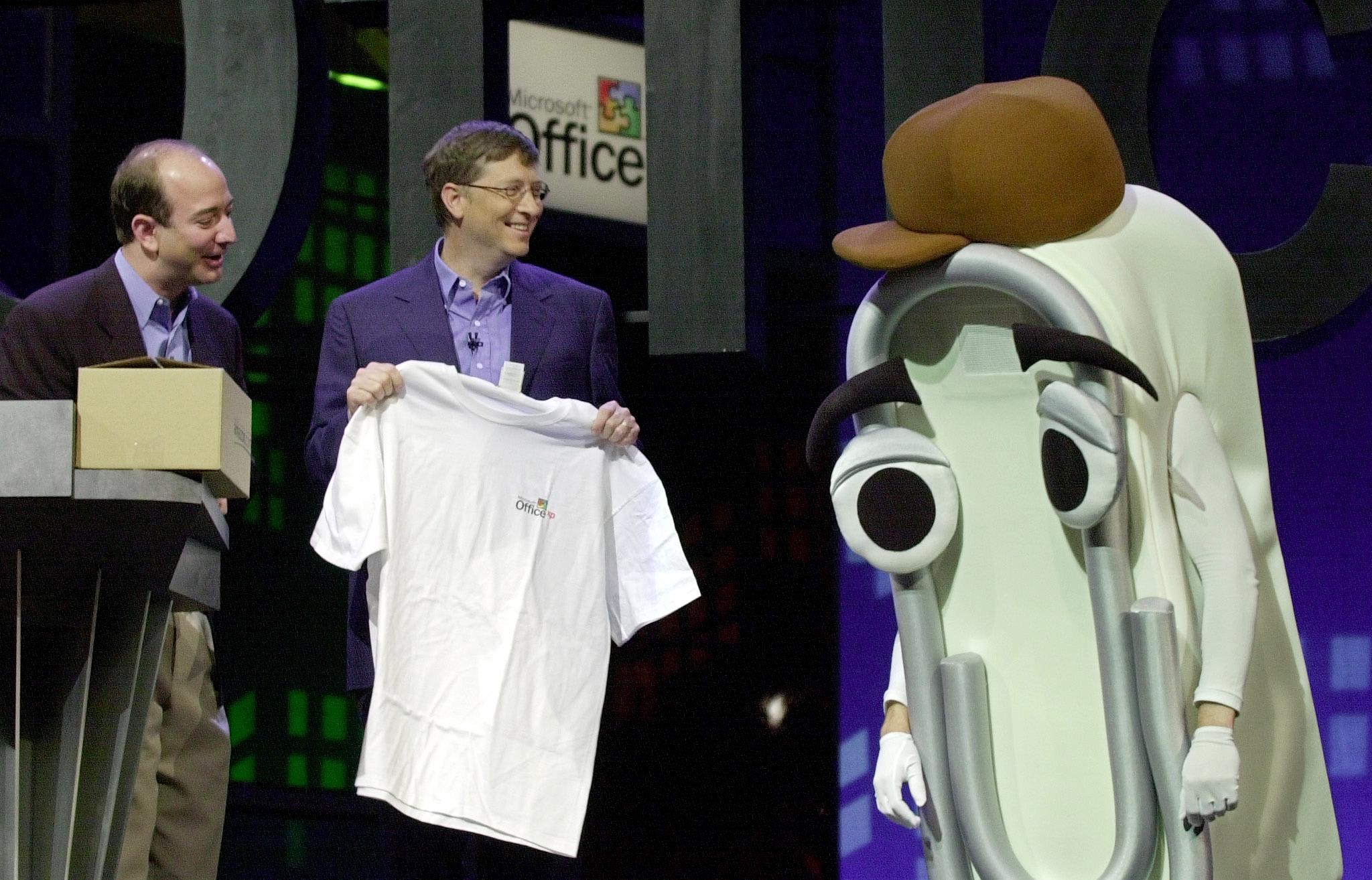 Former Microsoft CEO Bill Gates, center, presents a T-shirt as a retirement gift to Clippy, right, a person dressed as the Microsoft Office Assistant, as Amazon CEO Jeff Bezos, left, looks on at the Office XP launch in New York on May 31, 2001, in New YorkStan Honda | AFP | Getty ImagesClippy, Microsoft’s love-it-or-hate-it virtual assistant that debuted in the 1990s, has come back to life as a free application for Apple’s MacOS.The resuscitation capitalizes on people’s memories of bygone software from Microsoft, which last year recaptured the title of world’s most valuable public company as it becomes more centered on subscriptions and cloud services.Devran “Cosmo” Ünal, senior product engineer at optics company Zeiss Group, released the software on the Microsoft-owned GitHub code-storage website last week, and it has drawn attention quickly.”So much fun!” Steven Sinofsky, an Andreessen Horowitz investor and former Microsoft executive who was involved in Clippy’s development, commented on a post about the software on Product Hunt, a forum for discussions on new digital creations.Clippy, which was originally designed on a Mac, came to be known more than two decades ago as a feature called Office Assistant, bundled into Microsoft’s Office 97 for Windows and Office 98 for Mac.Back then, users could choose from a cast of characters to pop up and try to help in Microsoft’s productivity programs like Word. Among the options were a diamond-shaped multicolored Office logo, a man resembling Albert Einstein named the Genius, and the smirking paper clip Clippit, which came to be known as Clippy. Microsoft even once came up with an Office Assistant for reviewers that took the form of an MS-DOS prompt, a Microsoft callback in itself, Sinofsky said in a video interview on Clippy’s history earlier this year.Ünal said in an email that Clippy made him feel like he wasn’t alone.”Without him, I was basically staring at a blank document,” he wrote. “He was part of my childhood and my hero when a paper was due for school.” Some people found the Office assistants to be disruptive, though. The New York Times called Clippy “annoying to the point of distraction.”In 2001 Microsoft announced that Clippy was being demoted in Office XP, the next version of its suite, which was built with simplicity in mind. “The wiry little assistant is turned off by default in Office XP, but diehard supporters can turn Clippy back on if they miss him,” Microsoft said in a statement. The company even unveiled a website with a game where people could shoot Clippy with rubber bands.It does seem that some people have missed him. In 2013 Clippy was implemented as code that could be added onto websites. In 2017 a developer in Italy built an open-source Clippy extension for Microsoft’s Visual Studio software-development tool. And earlier this year Clippy stickers for Microsoft’s Teams chat app became available on GitHub from Microsoft’s Office Developer account — only to be yanked in just one day’s time.Gaming console makers Nintendo, Sega and Sony have sought to cash in on nostalgia by bringing out smaller versions of their older products. Microsoft, at 44 years old, has plenty of options to reimagine. Last year it came out with a “classic” version of its iconic IntelliMouse that first arrived in 1996. With Clippy, though, the company has generally stuck with its decision to put Clippy in the past.”Clippy is flattered by the attention, but has no plans to come out of retirement,” a Microsoft spokesperson told CNBC in an email on Monday.WATCH: Here’s why this analyst finds Microsoft’s recovery fascinating