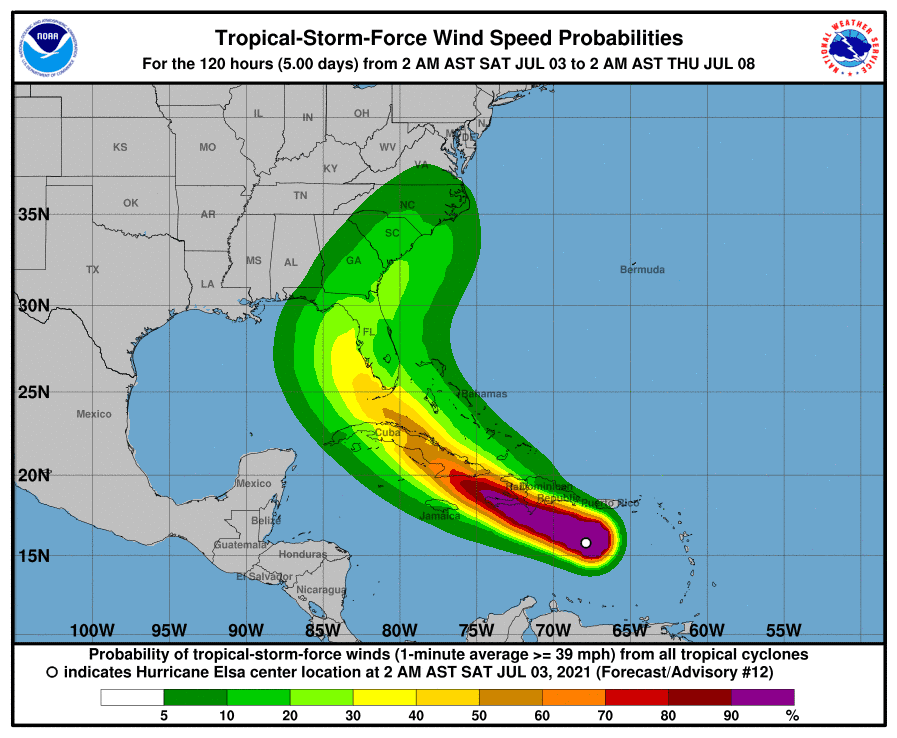 Probability of storm force winds from Hurricane ElsaSource: NOAAElsa weakened to a tropical storm force but continued to plow toward Haiti and the Dominican Republic on Saturday, a day after making landfall on the Caribbean island nations of Barbados and St. Vincent.The long-term forecast track showed it heading toward Florida as a tropical storm by Tuesday morning, but some models would carry it into the Gulf or up the Atlantic Coast.Officials in Florida have also warned potential impact of winds could hamper the search-and-rescue operations at the collapsed Surfside, Florida condominium.”Our Department of Emergency Management is assuming that that will happen and making the necessary preparations to be able to protect a lot of the equipment. You could potentially have an event with the building as well,” Florida Gov. Ron DeSantis said Friday.Miami-Dade Mayor Daniella Levine Cava signed a local state of emergency Saturday, allowing the county to mobilize resources if necessary, as search and rescue operations continue in the rubble of a partially collapsed 12-story condominium building.”There still is a lot of uncertainty about the path, but we are continuing to monitor closely and if there are any potential impacts to Miami-Dade we are ready,” Cava said during a news conference.The Category 1 storm was about 40 miles southeast from Island Beta, Dominican Republic, and was moving west-northwest at 29 mph as of 11 a.m. EST on Saturday, according to the U.S. National Hurricane Center (NHC). The agency reported maximum sustained winds of 70 mph, as the tropical storm, which had been a Category 1 hurricane earlier Saturday, weakened during its approach to Hispaniola and Cuba.The NHC warned that conditions were likely to deteriorate in the coming hours. Elsa’s forward speed was expected to decrease later on Saturday while maximum wind speeds would stay about the same until Sunday or Monday.DeSantis told reporters Saturday the state was preparing for a strong tropical storm, including isolated tornadoes, storm surge, heavy rainfall and flash flooding.”We’re hopeful that the storm just doesn’t have much runway to gain that speed and strength before it reaches our peninsula,” he added.– The Associated Press contributed to this report.

Carnival Cruise Line to launch first voyage from U.S. port since last year
How businesses are getting billions in cash back from government to offset hiring costs
To Top
error: Content is protected !!