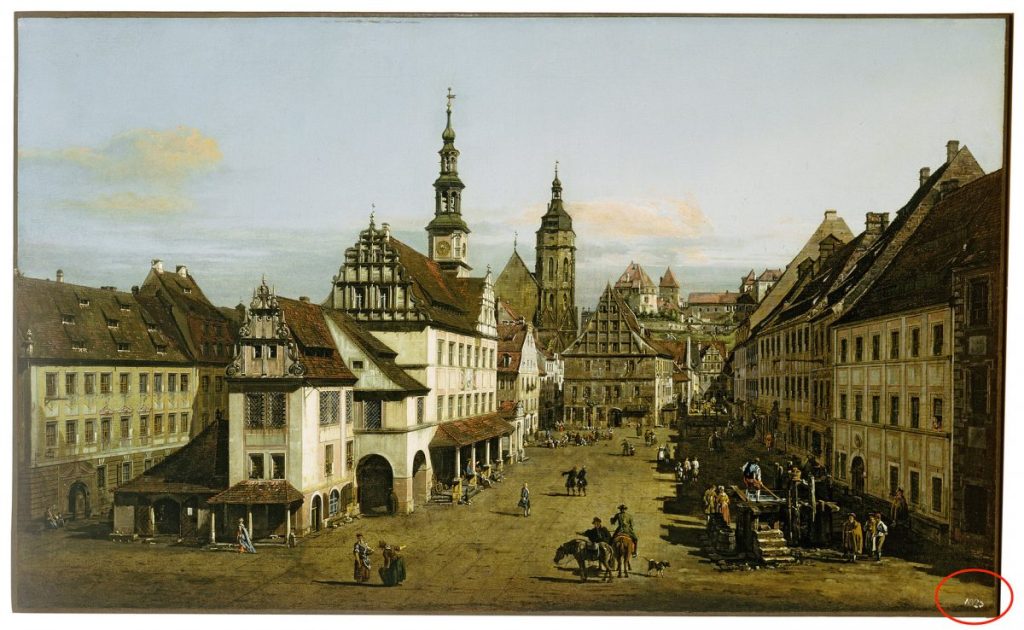 The Monuments Men Foundation for the Preservation of Art, an organization that researches works looted during World War II, is calling on the Museum of Fine Arts Houston to return an 18th-century painting to the heirs of a German-Jewish collector. The MFA asserts that the sale of the work was “legitimate” and that there is therefore no need to restitute the painting.
In a statement released on Wednesday, the foundation claimed that Bernardo Bellotto’s Marketplace at Pirna (ca. 1764) was sold under duress in the years before World War II. It had once belonged to department store magnate Max J. Emden, who lost much of his wealth amid Nazi persecution. The foundation alleges that the art dealer who bought it from Emden collaborated with the Nazis.

Emden fled to Switzerland in 1933 and became a citizen there a year later, residing with his art collection on the Brissago Islands until his death in 1940. As the Nazis came to power during the early and mid-’30s, he continued to maintain assets and businesses in Hamburg.
Monuments Men Foundation director Robert Edsel said in an interview that the museum has an obligation to conduct further research to clarify the painting’s official record. “This is one of our nation’s most important museums,” he said. “They have immense resources. Where is the curiosity to research that?”
In a statement to ARTnews, MFA director Gary Tinterow reaffirmed the museum’s belief in the “legitimacy” of Emden’s 1938 sale of the painting.
The Emden heirs began an initial inquiry into the Bellotto in 2007, and filed a claim for it in 2011. They have never pursued legal action.
In response to the 2011 claim, the museum reviewed the work’s provenance. In his statement, Tinterow said, “The Museum maintains, as it did in 2007 and 2011, that the 1938 sale of Bellotto’s Marketplace at Pirna to the German government was initiated by Dr. Emden, as a Swiss citizen, with the painting under his control at his villa in Switzerland, and concluded by him voluntarily.”
Between March and April of this year, the Emden heirs once again raised concerns over the Bellotto work’s ownership record and enlisted the Monuments Men Foundation to aid in researching the painting’s ownership history. The painting has been in the museum’s collection since 1961, when it was gifted by the Samuel H. Kress Foundation. According to the Monuments Men Foundation, records indicate that Emden sold the work to German dealer Karl Haberstock in 1938, along with two other Bellotto paintings that were later acquired for Adolf Hitler’s planned museum in Linz. Haberstock regularly supplied artworks to Nazi forces.

Records obtained by the foundation indicate that the Bellotto was recovered by the Monuments Men in 1946 and restituted to the Dutch government. The foundation claims it was never returned to the Emden family.
The Monuments Men Foundation claims that, between 1945 or 1946, Allied forces recovered another version of Bellotto’s view of Pirna. According to historical records posted the foundation’s website, there was a mix-up of the two versions. Emden’s painting was returned to the son of art dealer Hugo Moser, who then sold the painting to Kress in 1952.
A previous version of the Bellotto’s ownership history on the MFA’s website stated, “it is possible that the provenances of the two versions have become confused.” The Monuments Foundation claims that an inventory number painted on the front of the work links the MFA painting to Emden.
Screenshots supplied by the foundation appear to show that, in June, two months after the foundation first contacted Tinterow, the museum removed Emden’s name from the painting’s online record—“erasing rather than clarifying the painting’s wartime history,” the foundation’s statement claims. The museum, in turn, issued a statement to the foundation in May confirming its position that “there is no physical evidence” that the painting is Emden’s.
Emden’s heirs also successfully sought the recovery of two other landscapes by Bellotto sold during the war, both of which were returned by the German government in 2019. The heirs subsequently sold them at Sotheby’s in 2020 for a collected £5.7 million ($7.8 million). Unlike the two pictures recently returned to the Emden heirs, the one at the MFA Houston does not have a Linz inventory number on its back, according to photographs supplied by the museum to the foundation.