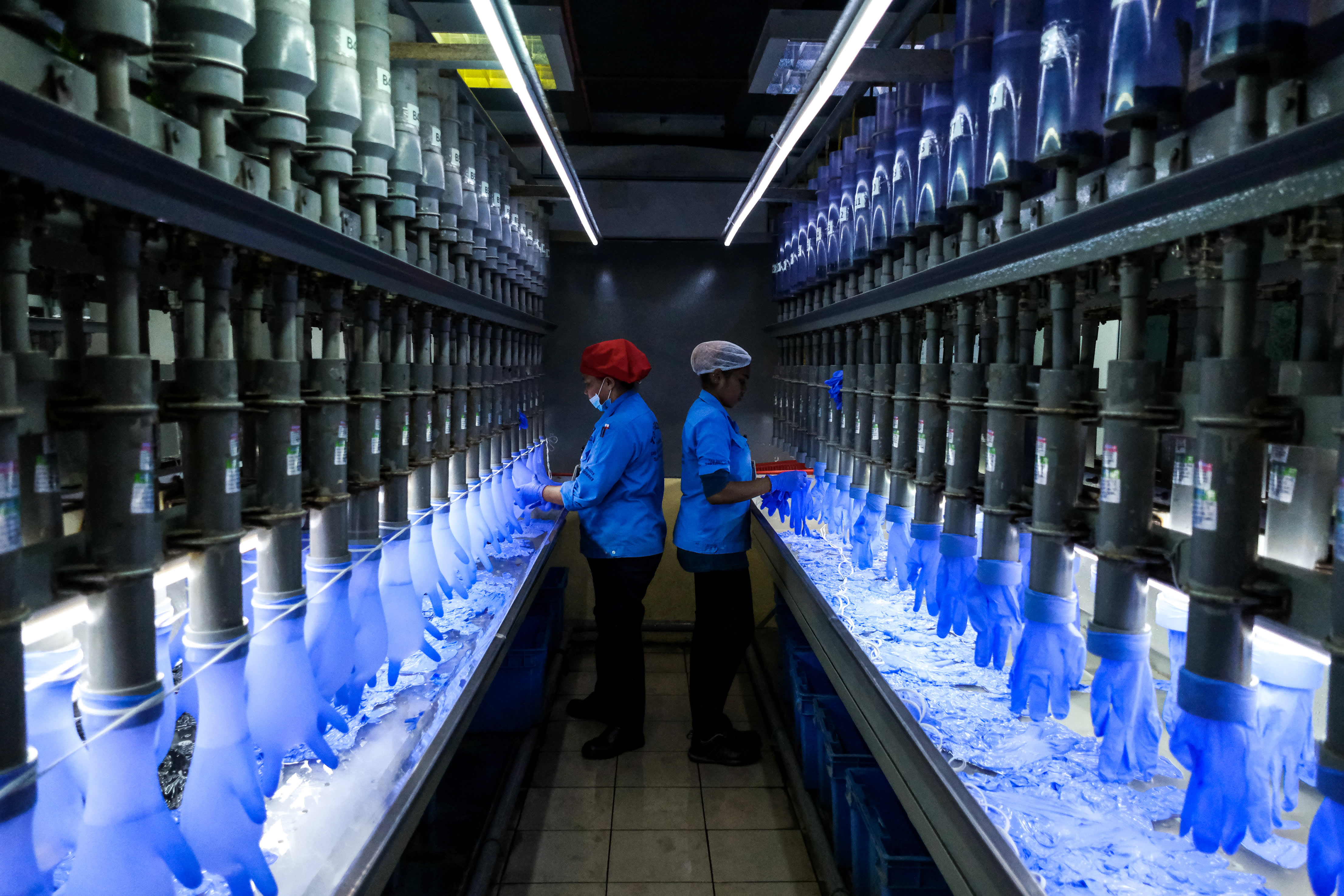 SINGAPORE — The recent plunge in share prices of Malaysian rubber gloves makers is “unjustified,” said an analyst who’s predicting further upside for the stocks.Shares of Top Glove, the world’s largest rubber gloves producer, have fallen 17.7% this year as of Monday’s close. Its smaller peers Hartalega, Supermax and Kossan have dropped between 18% and 30%.In comparison, the benchmark FTSE Bursa Malaysia KLCI Index fell 0.9% in the same period.Staff of Top Glove, the world’s biggest glove maker, check on the production of latex gloves in a watertight test room at one of the company’s factories in Selangor, Malaysia, on Feb. 18, 2020.Samsul Said | Bloomberg | Getty Images”We are maintaining our Overweight call on the sector, as we believe the recent decline in share prices is unjustified,” Ng Chi Hoong, an analyst at Malaysian investment bank Affin Hwang, wrote in a Monday report.The decline in Malaysian glove stocks followed a significant jump last year when the Covid-19 pandemic boosted demand for medical gloves.Factors hurting investor confidence in the stocks include a potential fall in selling prices of gloves on lower demand as more people are being vaccinated globally, said Ng.In addition, Top Glove’s plans to list in Hong Kong — its third stock listing after Malaysia and Singapore — also triggered worries that the company is raising funds in anticipation of a weaker outlook, he said.But those concerns will likely ease, said Ng. Here are his target prices for Malaysia’s glove stocks.Affin Hwang’s target prices for Malaysian glove stocksStocks Monday’s close (Malaysian ringgit) Target price (Malaysian ringgit) Upside Top Glove5.0410.10100%Hartalega9.7017.0075%Supermax4.2110.90159%Kossan3.669.30154%Demand to stay above pre-Covid levelsThe analyst said the jump in average selling prices of gloves is not sustainable, and forecast a 30% to 35% fall in prices in 2022. Still, prices will likely remain above pre-pandemic levels for the next two to three years at least, he said.That’s partly because demand for gloves is expected to remain elevated in the coming years as the medical sector uses more personal protective equipment, said Ng.He added that he agreed with the report by consultancy Frost and Sullivan and commissioned by Top Glove, which projected demand for disposable gloves to increase by an average 15% annually for the next five years.Such growth in demand would come alongside a 20% annual increase in supply in the next few years, said Ng.Top Glove plans to list in Hong KongAnother development that has driven recent price actions in Malaysian glove stocks is Top Glove’s planned third listing in Hong Kong.The company said last month that it applied for a “dual primary listing” in Hong Kong that could raise up to 7.7 billion ringgit ($1.87 billion). It said it will keep its current primary listing in Malaysia and secondary listing in Singapore.Investors reacted negatively to the news on concerns that the additional listing would dilute Top Glove’s earnings per share.Still, Ng has maintained his “buy” rating for Top Glove and its Malaysian peers. He said the decline in share prices have brought valuations down to levels that are “too cheap to ignore.”The analyst added that compared with their international counterparts Malaysian glove makers are delivering higher dividend yield and better return on equity — a measure of financial performance.Top Glove on Tuesday reported a surge in quarterly profits to 2.87 billion ringgit ($695 million) for the three months ended February, from 115.68 million ringgit ($28.03 million) a year ago.The company said global demand for gloves continued to be “strong,” with the Covid pandemic spurring an increase in glove usage and heightened hygiene awareness.