President Donald Trump gestures to the crowd of supporters during a campaign rally at the Allen County War Memorial Coliseum in Fort Wayne, Indiana, Nov. 5, 2018.

Trade, immigration, health-care policy, jobs and the economy — these are the political issues over which elections are often decided. But as of now, policy is taking a backseat to personality.

President Donald Trump is the biggest 2020 election issue for small business owners across the U.S., according to the CNBC|SurveyMonkey Small Business Survey for the third quarter 2019. A combined 53% of small businesses see the election as a referendum on Trump.

No policy area was even close. Health care was cited by 9% of small business owners; immigration by 7%; climate change by 5%.

The core issue of “economy and jobs” was not a close second among small business owners around the country, with 16% citing it as their top voting priority.

The CNBC|SurveyMonkey Small Business Survey for Q3 included responses from approximately 2,300 small business owners across the country, collected between July 29 and Aug. 4.

“When it comes to voting, party identification matters much more than whether someone owns a small business,” said Laura Wronski, senior research scientists at SurveyMonkey. “People who identify as Democrats, whether or not they own a small business, want to vote for the Democratic candidate. The same is true for Republicans.”

Wronski was cautious about making too much of responses to this question, given how early it is in the election season.

“We have Donald Trump on one side and 20-plus Democratic candidates on the other side,” she said. “Partisans want to vote their party’s representative into office — that’s the whole goal of an election — and small business owners are no different than anyone else.”

She noted that Independents care much less about which party is in office and much more about certain policy issues. In addition, when small business owners are asked which issues are of the most importance to them outside an election context, the importance of the other issues surfaces.

“When you take President Trump out of the equation … ‘the economy and jobs’ is the No. 1 issue for small business owners and for people overall,” Wronski said.

In the third-quarter survey, 25% of small business owners said “jobs and the economy” were the No. 1 issue that “matters the most” to them at the current time. Immigration was second, at 22%.

Approval ratings for Trump rise in correlation with the size of a small business. 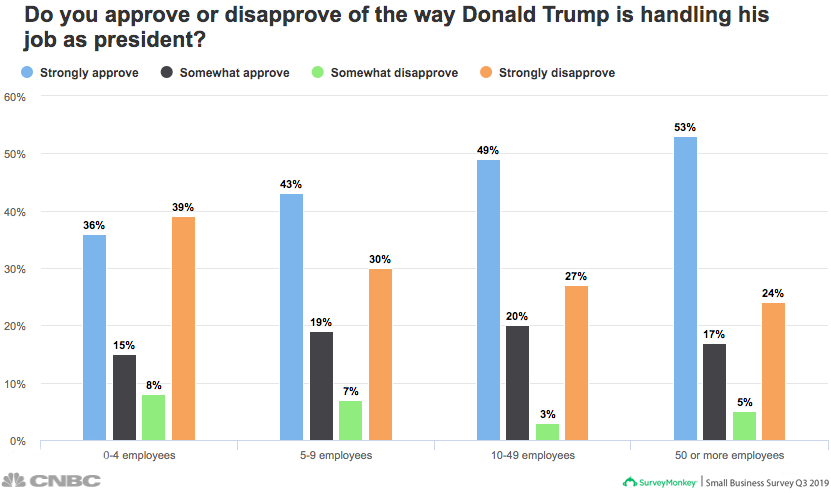 “There’s not a lot of regulatory or tax threats from Washington,” Kerrigan said. “The economy is stronger and business doing better. … My guess is that people who want to keep Trump in office are relating it to his policies. There are going to be business owners who may find President Trump, in terms of his personality, tough but may agree with policies.”

Carla McCracken, a small business owner in her 50s, reflects this view. After living in Indianapolis for 30 years and selling six Dunkin Donuts’ franchises in the city, she moved back to her hometown of Spencer, Indiana, with her husband and opened an independent coffee shop there last November.

“Right now most Democrats are pushing socialism. As a small business owner, I want to be able to make the decisions for my business, not have to follow excessive rules and regulations set out by the government,” said McCracken. “President Trump is running our country like a business, and I see this as a positive, not a negative. I may not agree with everything he says and does, but feel our county is in a much better place than it was before he took office. He’ll get my vote again.”

Keeping Trump in office is a priority that rises along with the age of small business owners. 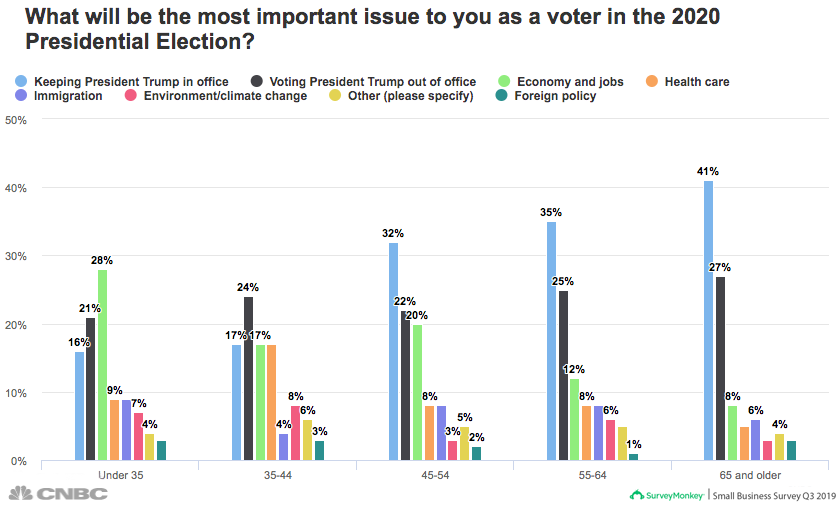 Ben Thomas, owner of Five Pound Apparel, a retail store in Springfield, Missouri, said a multitude of new small businesses have opened in the Springfield area in recent years, and it was happening toward the end of the Obama administration and has continued with Trump in the White House.

“I am of the belief that many times the sitting president gets far too much credit/blame for a good or bad economy. … The core economic value a sitting president can have is to continue to foster a sense of pride and spirit of American ingenuity and entrepreneurship. On those marks, President Trump has done a good job.”

Thomas, who is not registered as either a Republican or Democrat, added, “While there are many things President Trump says that go against the way most Midwest people speak to each other, his actual actions and policies have not had a negative impact on the majority of us. I am far from sure, but I think Trump will win again by a narrow margin.”

Vincent Martino, who owns a chiropractic business in New York City and voted for Clinton in 2016, provided an example of how personality and policy overlap in voting preferences. As an individual, he said the most important issue for him is voting Trump out of office in 2020. But as a business owner, it is health-care policy.

“It keeps coming down to the uncertainty of health care. In 2020, I want to know what’s the future of health care. I don’t think with the current administration we will get anything done. We need answers. No one has a plan or a vision to make health-care providers feel comfortable, safe and confident in their future.”

When asked in the Q3 survey what is the most important issue to them right now — outside of the election context — 29% of Democrats said health care, followed by 28% who cited “the environment.”

Matt Laricy is less concerned about who wins the election than he is about the election season. A real estate agent who manages his own brokerage group based in Chicago, he said the combination of an election season and fears of recession could create a nasty environment for the consumer.

“I think the consumer is going to be nervous about who is going to be elected and how that’s going to change our country. And I think that, with the fear of a looming recession, is going to kind of make the economy as a whole slow down big-time. I think everybody is going to be kind of like walking on eggshells,” said Laricy.

The CNBC|SurveyMonkey Small Business Survey for Q3 was conducted across approximately 2,300 small business owners between July 29 and Aug. 4. The survey is conducted quarterly using SurveyMonkey‘s online platform and based on its survey methodology. The Small Business Confidence Index is a 100-point score based on responses to eight key questions. A reading of zero indicates no confidence, and a score of 100 indicates perfect confidence. SurveyMonkey publishes additional quarterly small business data and analysis.