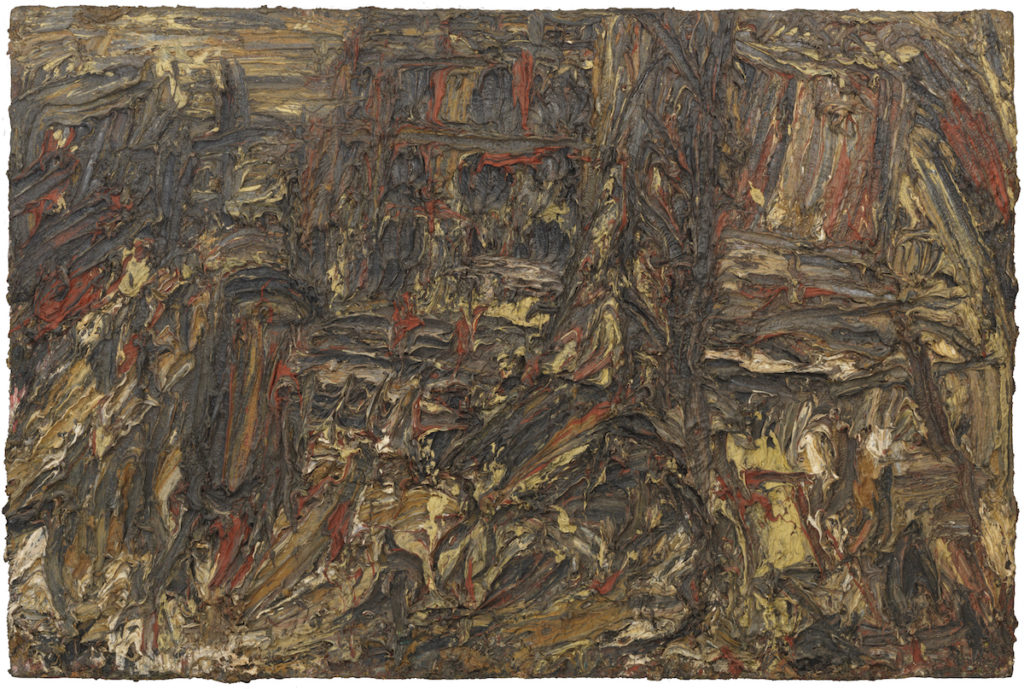 The beloved English painter Leon Kossoff died last Thursday, leaving behind a legacy of frenzied, impassioned, and abstract scenery that captured a particular moment in time in British history. His work was exhibited extensively not only in Britain but all around the world, and below, some of his friends and collaborators discuss his legacy.

I was lucky enough to be the curator of Leon Kossoff’s 2007 exhibition at London’s National Gallery, Leon Kossoff: Drawing from Painting. I’d already got to know the artist fairly well during my time working at the Gallery, and I became his point of contact when he wanted to visit early in the morning, before the public were admitted, to draw from the paintings. Not many artists are granted this privilege, but for Leon, it was of extreme importance. He drew continuously from a small range of paintings. Veronese, Rubens, Poussin, and Rembrandt were among his favored artists, with a special devotion reserved for Constable. I remember once bumping into Leon in one of the Constable rooms at the Tate Gallery. It was 1999 and I was there to see a big Jackson Pollock exhibition. We chatted for a moment about Pollock before Leon paused and gestured to a small area of maybe three or four square inches of Constable’s Hadleigh Castle. “Look,” he said. “Everything that Pollock ever did, Constable had already done it.”

His reason for returning to draw from the same National Gallery paintings over and over again was simple. For Leon, each new encounter with an old favorite was like seeing the picture for the first time. He was trying to discover what it was that made him love these works so much, even though he knew he would always fail. ‘The more I look at them and the more I work from them, the more mysterious they become,’ he would often say.

The same was true for the subjects of his paintings, whether people in his studio, suburban streets and buildings, a flower stall at the Embankment underground station, or Nicholas Hawksmoor’s great structure, Christ Church Spitalfields in the east end of London. He never knew how his pictures would turn out when he started them because each work was a voyage of discovery, each session of painting was a fresh encounter with the subject. And contrary to the received view of Kossoff’s pictures as being melancholy broodings filled with anxiety and uncertainty, I see them as bursting with light, life, energy and love. The urgency and freshness of his pictures is what makes me want to return to his work again and again. His paintings are beautiful discoveries, made by an artist working at full throttle and utterly committed to doing the best for his subjects.

He was indeed a great artist (and a wonderful man), and I am sure that his stature will only grow in the coming years, as his work becomes more visible.

Kossoff was not one to speak of his own talent. So when he realized back in 2004 for his survey exhibition that we had placed one small light-filled painting of his in the Giacometti Room of the Louisiana Museum, he felt that it was too bold a suggestion. It was, however, one that let us to the core of two great 20th century artists whose work so insistently relied on the sensation of the gaze.

Often when speaking of Kossoff’s work, the material aspect of his paintings serves as the point of departure, but in fact paint was only a means of establishing the image he was putting everything into. It meant, for instance, that the material excess of post-war expressionism never could work as a description of his work. Kossoff was, in some way, in a time pocket already in his own time. In the words of the late Danish painter Per Kirkeby, Kossoff’s paintings became a way of being inside the motif, and style consequently was of no concern. Painting took over, in the thick of the moment, leaving the work hovering between the monumental and the momentary.

Louise Bourgeois ‘Spider’ Work, Estimated at $25 M. to $35 M., Could Place Among Most Expensive Works by Women Artists Ever Sold -ARTnews