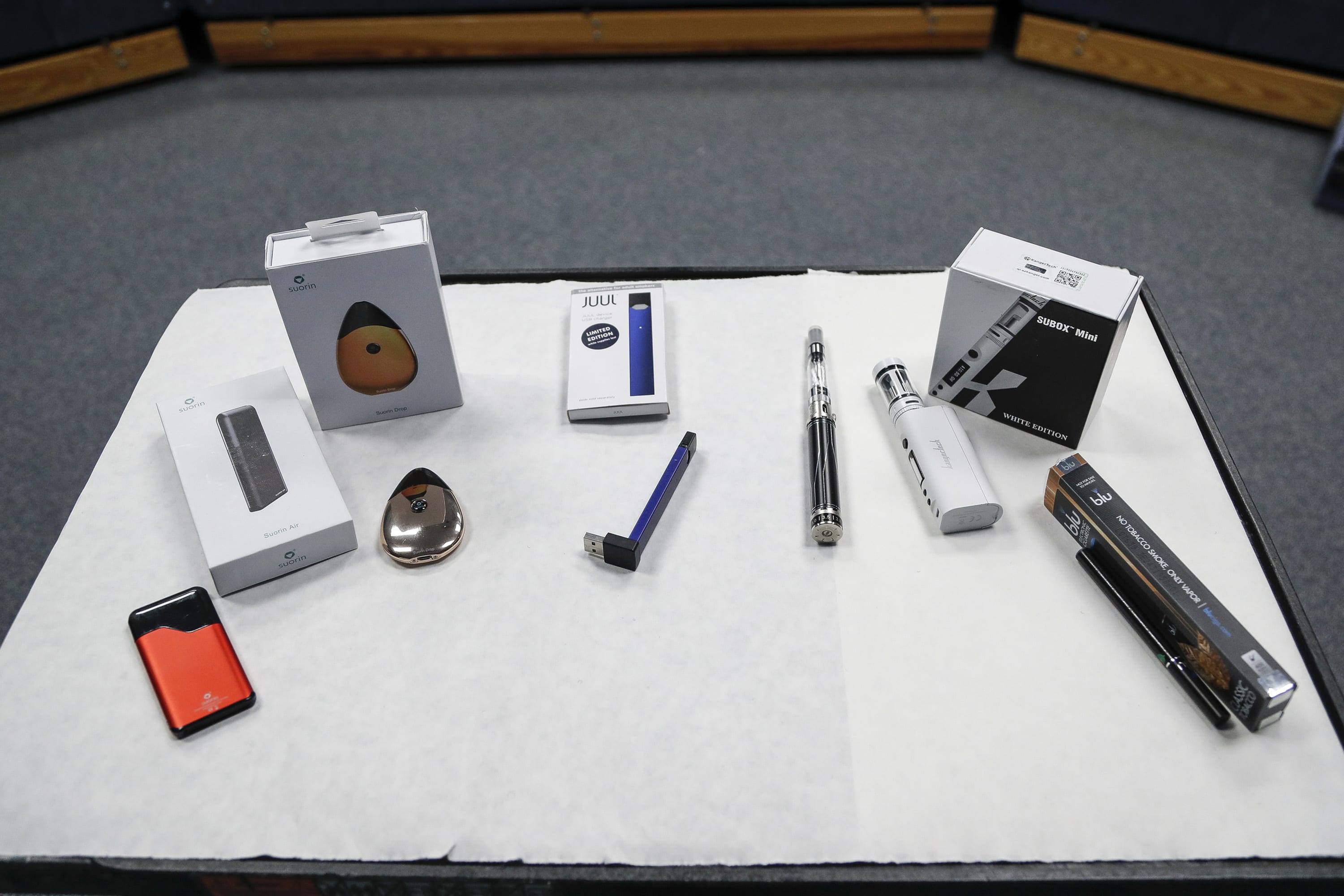 A collection of popular vaping products include Suorin, Juul and Blu are displayed for Cheryl Phillips’ presentation at St. Joseph Mercy Canton Health Center in Canton on Monday, Sept. 24, 2018. The U.S. Food and Drug Administration has announced a series of policies to attack what it calls “the epidemic use of electronic cigarettes and nicotine addiction among kids.” (Junfu Han/Detroit Free Press/Tribune News Service via Getty Images)Junfu Han | Tribune News Service | Getty ImagesA bipartisan group of senators is urging acting Food and Drug Administration Commissioner Ned Sharpless to immediately pull most e-cigarettes off the market, including market leader Juul.Sens. Dick Durbin, D-Ill., Lisa Murkowski, R-Alaska, Jeff Merkley, D-Ore., and Richard Blumenthal, D-Conn., sent Sharpless a letter Friday pushing the FDA to remove all pod- and cartridge-based e-cigarettes until the agency can review their safety. The Trump administration last week announced it was preparing to remove flavored e-cigarettes until the FDA reviews them amid a surge in teen vaping.Under the review process, companies will need to prove the products offer a “net public health benefit.””The FDA should apply this standard to all e-cigarettes through a pre-market review process, and, given the unique popularity and threat posed to children, the same reasonable restrictions and presumption of public health impact that are being imposed upon flavored products, should immediately be imposed upon cartridge-based e-cigarettes,” they wrote.The senators are turning up the pressure on the agency amid an outbreak of a deadly lung disease linked to vaping that has sickened at least 530 people and killed eight. Health officials have not identified one brand or substance as the cause. Most patients reported vaping THC, the compound in marijuana that produces a high.”While no one substance or chemical has been conclusively linked to all the illnesses, it does appear that a significant number of young people are tampering with e-cigarette devices to vape products other than, or in addition to, nicotine,” the senators wrote.At a meeting with Durbin and other senators last week, Sharpless picked up the Juul device Durbin carries around and told lawmakers that when people finish a Juul pod, they can refill it with THC, according to a Durbin aide who attended the meeting.Lawmakers at the meeting were alarmed to learn the FDA does not have any rules in place to prevent e-cigarettes from being adulterated. Sen. Mitt Romney, R-Utah, and Merkley introduced a bill Thursday that would specify design standards to ensure the devices are tamper-proof, among other measures.The FDA was slated to start reviewing e-cigarettes last summer. In 2017, former Commissioner Scott Gottlieb postponed the deadline to 2022, prompting scorn from public health groups and some lawmakers.The agency will start taking applications in May following a court ruling this summer that determined the FDA had shirked its legal responsibility to regulate e-cigarettes. The FDA on Friday published a proposed rule setting the application requirements.”The proliferation of cartridge-based e-cigarettes — and their ever-increasing popularity with children — is primarily due to the FDA’s years-long refusal to regulate any e-cigarette devices or impose common-sense design standards preventing against adulteration, despite having the authority to do so,” the senators wrote in their letter.