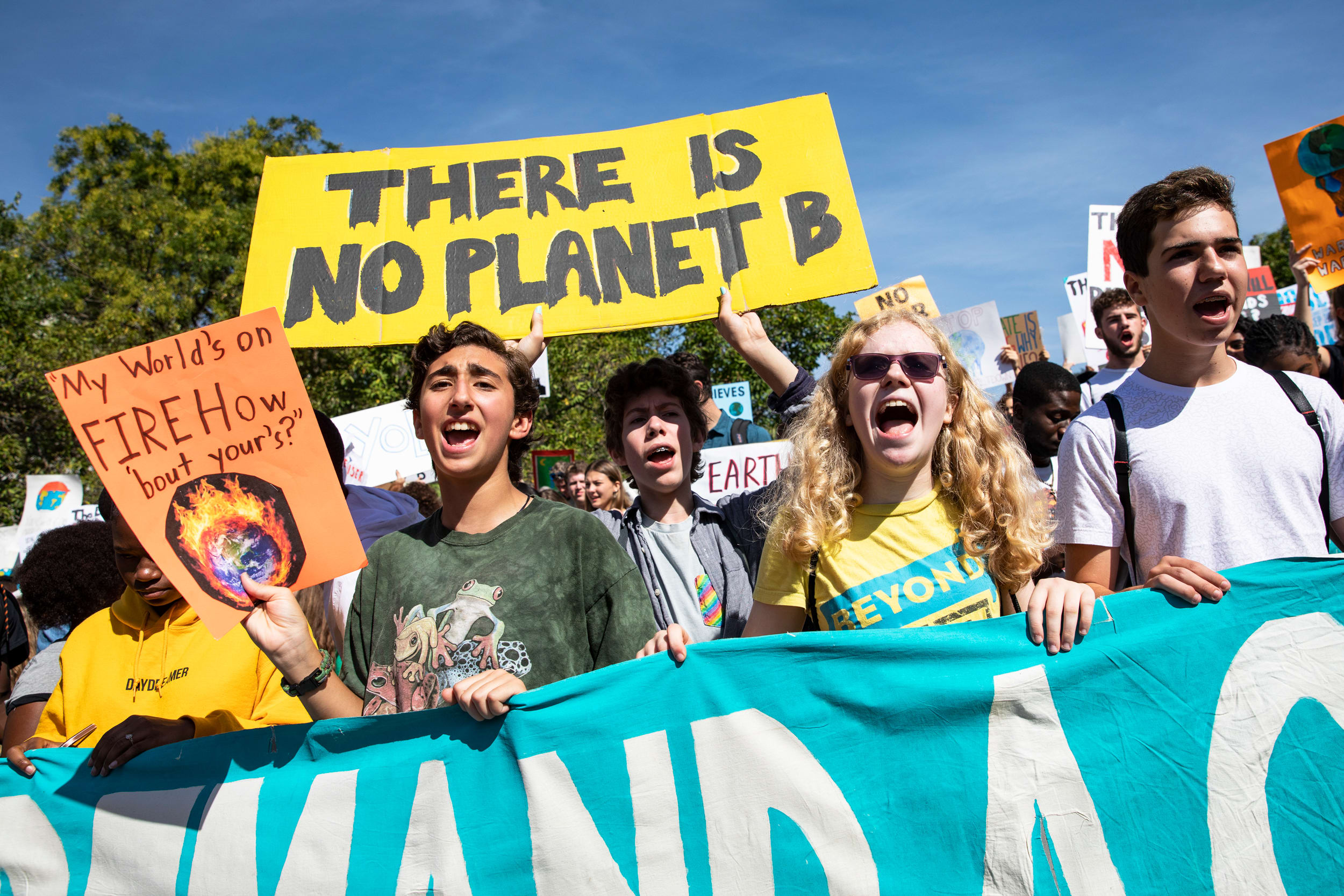 As thousands of young people around the world begin filling up the streets on Friday for a day of climate protests, several brands and retailers are shutting down operations as employees join the strikes.The global climate strikes come just days before the United Nations Climate Action Summit on Monday, in which U.N. Secretary-General Antonio Guterres will talk to world leaders in New York about how to reduce global greenhouse gas emissions. As of Tuesday, 4,638 events were slated to take place in 139 countries, according to teen climate activist Greta Thunberg.Some businesses, mostly small and midsize companies, are providing workers with paid time off to join the strikes, while others are shutting down operations entirely. However, few major firms have made the pledge to strike in solidarity with protesters.More than 1,500 Amazon employees have vowed to walk out of work as they pressure the company to be more aggressive in its climate goals and cut ties with fossil fuel producers. On Thursday, Amazon committed to meeting the goals of the Paris Agreement 10 years ahead of schedule and be carbon neutral by 2040.”Amazon is one of the world’s most innovative companies. We pride ourselves on being a leader. But in the face of the climate crisis, a true leader is one who reaches zero emissions first, not one who slides in at the last possible moment,” Amazon Employees for Climate Justice said in a statement.”We know that reaching zero emissions by 2030 won’t be easy. But this is not the time to shy away from the challenge.”In the tech industry, more than 900 Google workers are walking out, along with hundreds of employees from Facebook, Microsoft and Twitter, according to the Tech Workers Coalition.Ben & Jerry’s is closing its corporate offices in South Burlington, Vermont, during the strike and halting production at its manufacturing plants in Vermont and the Netherlands. Its ice cream shops around the world will close or will open later in the day.”We recognize that climate change is an existential threat to our planet and all its inhabitants, and therefore we are proud standing with the youth-led movement demanding bold action in response to the climate emergency,” a company spokesperson said in a statement.Furthermore, companies including Patagonia and outdoor retailer Burton are shutting stores and going offline for the strikes. Burton’s website will redirect to the Global Climate Strike website and says its physical stores will provide a space for climate protesters to regroup.”For decades, many corporations have single-mindedly pursued profits at the expense of everything else — employees, communities and the air, land and water we all share,” Patagonia CEO Rose Marcario wrote on LinkedIn.”Now we face a dangerously hot and fast-changing climate that is exacerbating natural disasters, causing food and water shortages, and speeding us toward the biggest economic catastrophe in history. The plain truth is that capitalism needs to evolve if humanity is going to survive.”Activists gather in John Marshall Park for the Global Climate Strike protests on September 20, 2019 in Washington, DC.Samuel Corum | Getty ImagesOther companies that are taking action include Lush Cosmetics, which is shutting down manufacturing facilities and retail outlets in the U.S. and halting online sales for the Friday strikes. SodaStream, a seltzer maker owned by PepsiCo, is closing its corporate headquarters and e-commerce.Badger Balm, an organic skincare company, is also shutting down and providing employees with paid time off to join the strikes.Many of the companies that are participating have long sought to cultivate environmentally responsible brands.More than 7,000 companies have also pledged to donate ad space or place banners on their websites promoting the strikes. Companies joining this “digital climate strike” include Tumblr, WordPress, Kickstarter, Imgur and BitTorrent.Seventh Generation, a company known for its eco-friendly cleaning products, is donating its commercial airtime on NBC’s The Today Show throughout the week of Sept. 16 to support the global climate strikes.”The economic incentive is that we will still have a business in 11 years from now,” Hanneke Willenborg, CMO of Seventh Generation, said in reference to the U.N.’s announcement that there are only 11 years left to prevent irreversible damage from global warming.Over 450 other businesses are supporting the strike by giving workers time off or closing stores, according to The American Sustainable Business Council, or ASBC.”Already American businesses are being hurt by climate-related extreme weather and changing weather patterns,” said ASBC president David Levine. “The damage includes supply chain disruptions, harm to facilities, and increased energy and employee health costs.”Disclosure: Comcast is the parent company of NBCUniversal and CNBC.

Starbucks is planning to launch a Tie-Dye Frappuccino this week