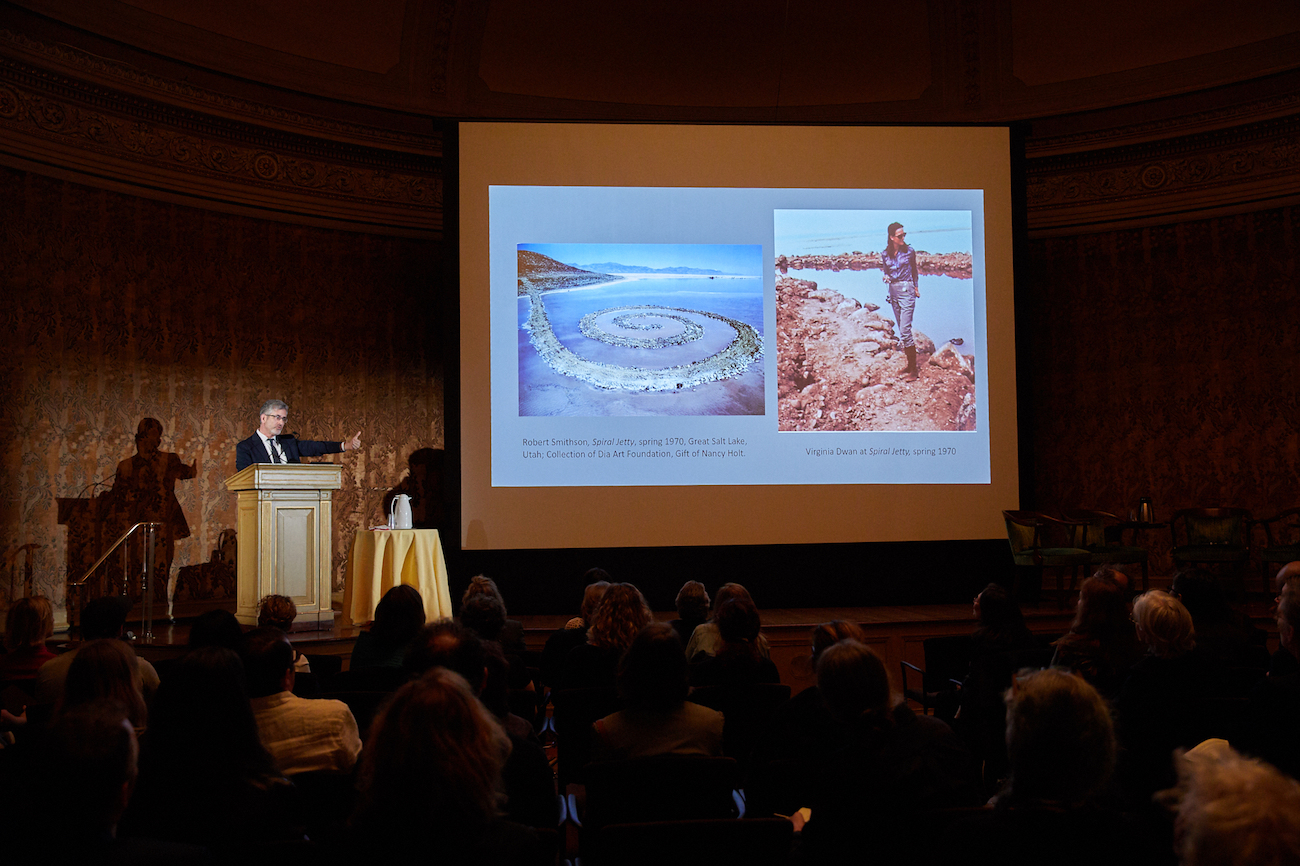 The next time vandals shoot bullets into Sun Tunnels or Burning Man fans dig a tribute to Nine Nevada Depressions, they might like to do so while sipping a Spiral Jetty IPA. They should beware the kind of bats that haunt the boxy concrete sculptures spanning a half-mile of desert grasslands in Marfa, Texas, but they could find peace in a Los Angeles Skyspace installation that doubles as a movie theater with seats modeled after those in an old propeller plane.

Such were some of the thoughts that rose to mind in the midst of “Collecting the ‘Uncollectible’: Earth and Site-Specific Sculpture,” a symposium last week at the Frick Collection in New York. Organized by the institution’s Center for the History of Collecting, the heady five-hour affair surveyed the legacy of Land art and the present-day status of earthworks whose place in art history is still being negotiated. 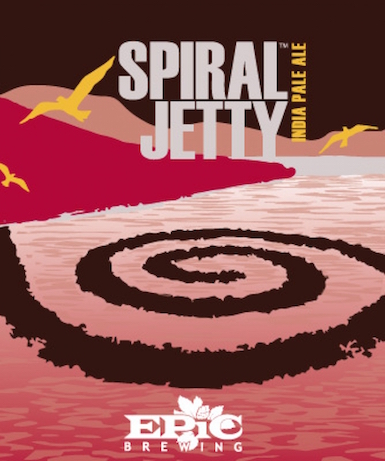 The program drew heavily on the Dia Art Foundation, which oversees Nancy Holt’s Sun Tunnels and Robert Smithson’s Spiral Jetty, both constructed in Utah in the 1970s. Dia also connects historically to Michael Heizer (the creator of Nine Nevada Depressions), Donald Judd (the Minimalist maven of Marfa), and James Turrell (who built a special Skyspace cinema for the L.A.-based collector Jarl Mohn, himself a participant in a panel at the symposium).

The event kicked off with a keynote speech by Suzaan Boettger, author of the 2003 book Earthworks: Art and the Landscape of the Sixties, who contrasted the ever-prolific Smithson with T. S. Eliot’s comparatively lazy “patient etherized upon a table” before projecting some funny found wedding pictures from Spiral Jetty and showing a hoppy tribute to the work by the craft-beer enterprise Epic Brewing. Setting art of the kind in the context of political upheaval in the ’60s and ’70s, Boettger flashed a poster supporting draft-dissenting refuseniks with the slogan “Girls Say Yes to Boys Who Say No.” And she held out for special attention a message on a bright yellow painting by Walter De Maria streaked with the words “The Color Men Choose When They Attack the Earth.” Thought to allude to the hue of Caterpillar-brand tractors, the painting was the only work to sell from gallerist Virginia Dwan’s first “Earthworks” show in 1968—to the storied taxi tycoon and art collector Robert Scull.

Boettger made a site-specific connection of her own when she showed the Frick Collection’s St. Francis in the Desert (ca. 1476–78) by painter Giovanni Bellini, whose ascetic subject, set against a dramatic backdrop of rocks, echoed Heizer’s early declarations about Land art’s anti-commercial aspects. (Bellini’s Francis and Heizer share something in the way of rugged good looks and chiseled features, too.) In more contemporary terms, Boettger called Kanye West “the latest patron on the ‘uncollectible’”—for his recent donation of $10 million to James Turrell’s Roden Crater—and showed a picture of the hip-hop star and “his new chum” taking in the sights at the artist’s long-term show currently at MASS MoCA. 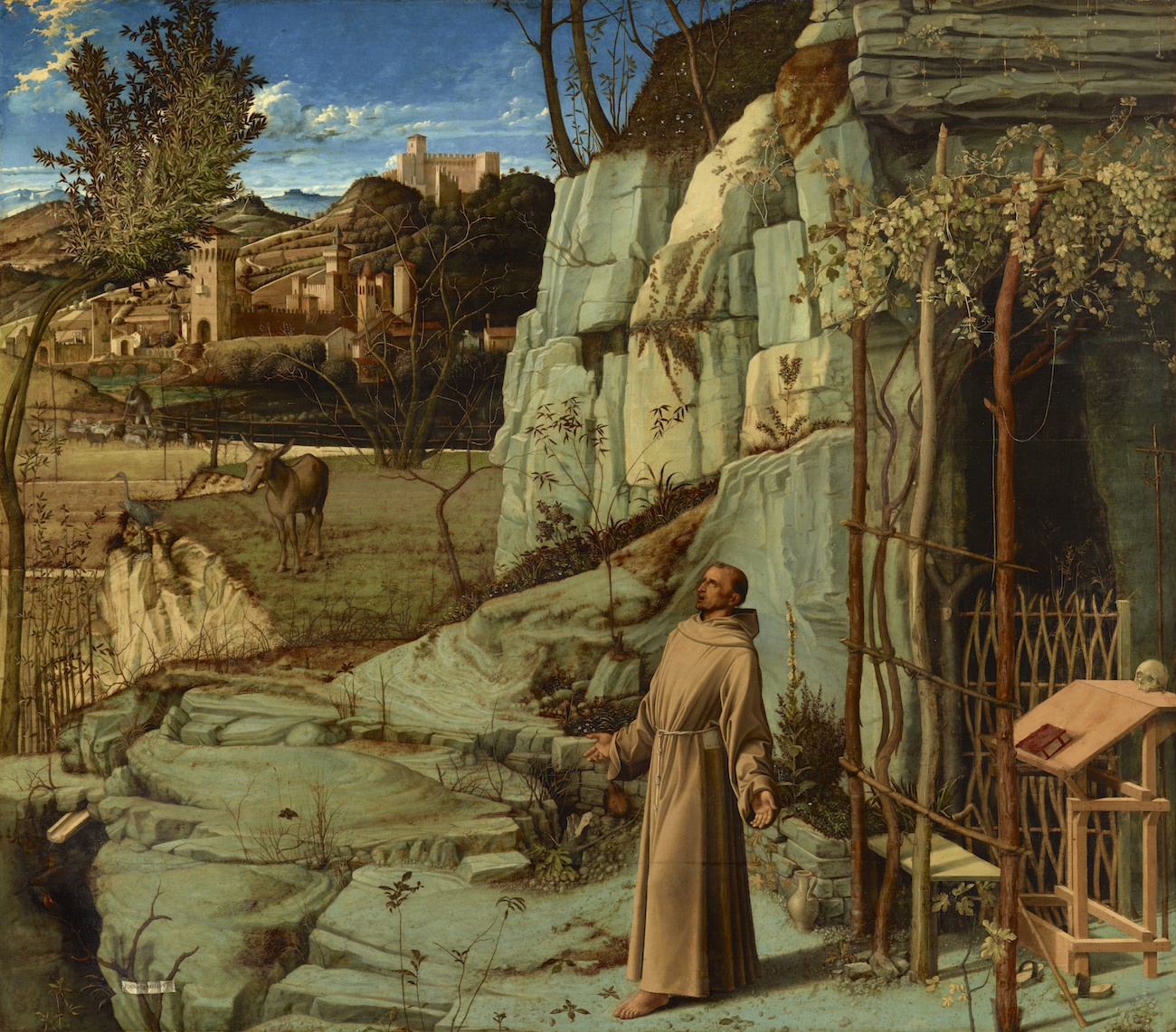 Dia curator Alexis Lowry followed with a talk on Heizer’s Nine Nevada Depressions, supported financially by Scull after the artist sent the collector an introductory letter in 1968. That was shortly after a lesser-known earthwork the year before by Claes Oldenburg, who for a piece titled Placid Civic Monument dug a grave-size hole in Central Park behind the Metropolitan Museum of Art and, that same afternoon, filled it back up again, with nary a trace of monumentality to be found.

Lowry focused mainly on Heizer’s connection with Scull—shown in pictures wearing dapper white shoes on visits to the desert by helicopter and plane—and a disagreement over a photo album documenting sculptural cuts the artist made in the hard, dry ground. Heizer had a complicated relationship to photography of work meant to be experienced in the elements—such that for Dwan’s “Earthworks” exhibition, Lowry noted, he showcased his work in the form of backlit transparencies rather than photo prints, to highlight the transitory aspects of pictures in comparison to the concreteness of the work itself.

Though Scull cherished the leather-bound album that Heizer made for him, the artist grew increasingly uneasy with its existence and ultimately took it back to destroy it, against his patron’s wishes. But all was OK in the end, Lowry noted, as the two entangled characters remained friends.

James Meyer, a curator at the National Gallery of Art (and for two years at Dia), followed with a talk on the significance of Dwan, who had been scheduled to participate in a panel but did not appear. Meyer passed on well wishes from the legendary dealer, who he noted recently moved to 5th Avenue from her decades-long home in the Dakota building across Central Park.

Contemplating “uncollectibility” in the context of the symposium’s theme, Meyer said, to a round of laughs in the room, “Perhaps what is uncollectible now is art that is just so expensive that nobody can afford it.” He noted that Dwan—whose recent survey show, “Los Angeles to New York: Dwan Gallery, 1959–1971,” he curated—could not sell work in her early years by such significant figures as Yves Klein, Ad Reinhardt, and Robert Rauschenberg, and certainly not by artists digging holes and marking lines in the middle of nowhere.

Meyer told a story of Smithson and Holt ditching Dwan on a boat trip through the Yucatán Peninsula in Mexico, leaving her alone for a spell by the side of the Usumacinta River in the midst of quicksand. And he noted, with assistance from fellow experts in the audience, that the cost for the land and creation of Double Negative—Michael Heizer’s famous mesa-cut in Nevada, arguably the most important work of Land art of the era—amounted to the modest sum (considering its scale and significance) of $27,000. 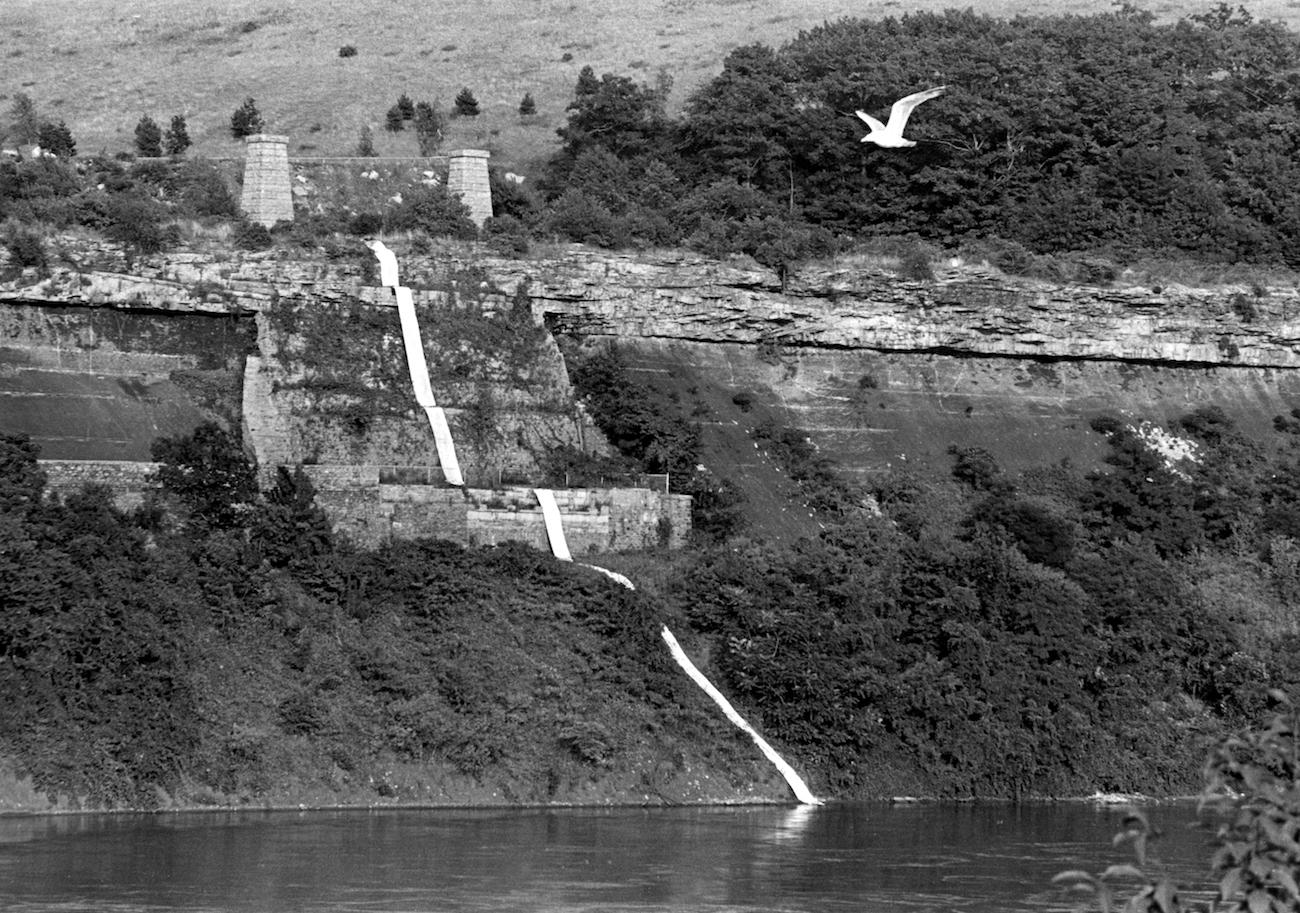 Following Meyer was a one-on-one talk between Dia curator Kelly Kivland and artist Michelle Stuart, who—after a stint as a mural assistant with Diego Rivera in Mexico in the ’50s—has worked with and on the earth in different ways. Her Sayreville Strata Quartet from 1976 is on long-term view at Dia:Beacon, in the form of four large paper scrolls rubbed with dirt from a town in New Jersey whose reddish firmament has made it a haven for brick-making. Stuart talked a lot about a momentous work created for Artpark in Lewiston, New York, in 1975: Niagara Gorge Path Relocated, a 460-foot-long roll of paper descended down a gorge that had been “the original location Niagara Falls at the time of the last glacier approximately 12,000 years ago,” according to a description in Stuart’s book Sculptural Objects: Journeys In & Out of the Studio.

Speaking of the formative cast of collectors and supporters of work of the kind, Stuart made a pointed distinction between Americans whose concerns included longevity and conditioning and Germans—like Alfred Schmela and Dia cofounder Heiner Friedrich—who were more open to entropy and degradation. “For some reason,” Stuart said, “the Germans didn’t worry about anything.” 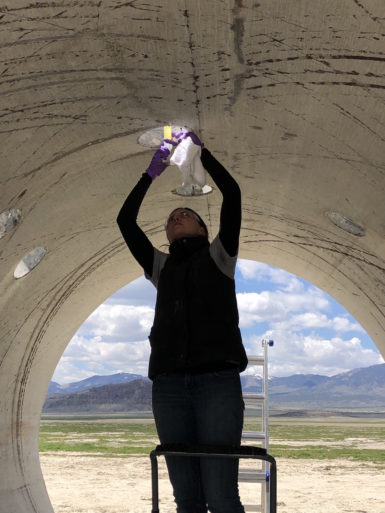 Conservation work on Sun Tunnels, with spiraling bullet lines inside.

Rosa Lowinger, a conservator whose firm RLA Conservation of Art & Architecture is based in L.A. and Miami, followed with a talk about her work, including renovating the foundations for Judd’s concrete boxes in Marfa and treating them for stains from droppings left by bats who sometimes dwell inside. Another big project involved the recent refurbishment of Nancy Holt’s Sun Tunnels in Utah, where visitors have taken to occasionally shooting bullets inside to watch them spin their way out in loop-the-loop patterns. Molten metal from bullets grinding against concrete at high speeds leaves lines—a fate that Holt, during her lifetime, reconciled and said was fine to accept without a fight.

The symposium’s final segment, moderated by Dia director Jessica Morgan, featured two collectors who know their way around art invested in outsize senses of time and scale: Leonard Riggio and Jarl Mohn. Riggio, the retired founder of Barnes & Noble booksellers, spoke of giving a gift long ago for the prospective completion of Michael Heizer’s massive work City, promised then by Michael Govan—a longtime Heizer collaborator and director of the Los Angeles County Museum of Art—to be completed within 18 months. When Heizer heard of the timeframe stated, he offered a corrective calling for a slightly longer span—of nine years. “Now it’s 12 years later,” Riggio said, with a laugh.

On the subject of buying artworks as promised gifts to institutions, as is his habit, Riggio said of himself and his wife Louise, “Our citizenship is as important as anything we do.” A collection of works by Isamu Noguchi in an outdoor pavilion at their house in Bridgehampton, New York, he said, will go to the Noguchi Museum at some point. “We get to live with them,” he said—but the works’ ultimate fate will be in the hands of others. 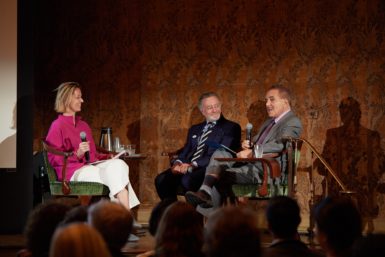 Mohn, the outgoing CEO of NPR, spoke of being convinced to turn over the design for a movie theater he’d been wanting for his home to James Turrell—“the world’s most expensive impulse buy,” he said. Asked how a visit to The Lightning Field—Walter De Maria’s expansive installation in New Mexico—affected his thoughts on collecting, Mohn laughed, “It makes me realize how futile it is.” Better instead is supporting work that can be experienced by others, in different contexts. “We shouldn’t own these things as individuals,” Mohn said. “We need to be helpful.”

Riggio agreed, saying of artworks that stand to be around for a long while to come, “They tell the story of our civilization.”