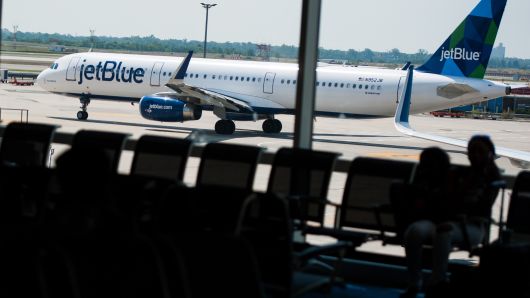 JetBlue Airways appears to be gearing up to announce plans for its first service across the Atlantic as soon as Wednesday, an expansion that the New York-based carrier views an an opportunity to undercut entrenched rivals with its cheaper business-class service.

The low-cost airline is scheduled to hold an “all hands” meeting with staff at New York’s John F. Kennedy International Airport along with “viewing parties” at some of its main hubs around the U.S. on Wednesday afternoon, according to a company invitation obtained by CNBC. A save-the-date email announcing the April 10 event featured a background pattern similar to upholstery on London’s subway. Buttons featuring JetBlue’s logo and iconic London sights of Big Ben and the London Eye were sent to JetBlue offices, according to one employee.

The company’s shares jumped by about 4% in after-hours trading on the news.

JetBlue may add service to London but its plans could include other routes to European cities from its New York and Boston hubs, important business travel markets.

JetBlue declined to confirm whether it would make an announcement Wednesday but said in a statement, “Potential routes to Europe could provide us an opportunity to grow our focus cities of Boston and New York as we consider the best use of our aircraft from a margin perspective in those cities.”

JetBlue’s European debut would pit the low-cost carrier against large international airlines like Delta, American, United and their European partners who dominate trans-Atlantic air travel. More than three-quarters of trans-Atlantic capacity last year was operated by airline in the largest alliances between carriers, according to consulting firm ICF.

A key part of JetBlue’s strategy breaking open their hold on service Europe would be its popular Mint business class, which features lie-flat seats and some suites with sliding doors as well as premium meals.

“When we think about trans-Atlantic, we do think we can disrupt largely around a Mint-like product because we’ve been so successful on flying to the West Coast with Mint,” Joanna Geraghty, JetBlue’s president and COO said last September.

The trans-Atlantic market, “especially in the premium category, suffers from the same lack of competition and high fares that [transcontinental] routes in the U.S. saw before JetBlue introduced Mint,” JetBlue’s statement said Tuesday.

A long-range variant of the Airbus A321 plane would likely be used to help JetBlue fly across the Atlantic and the airline said it would make a decision on that plane this year.