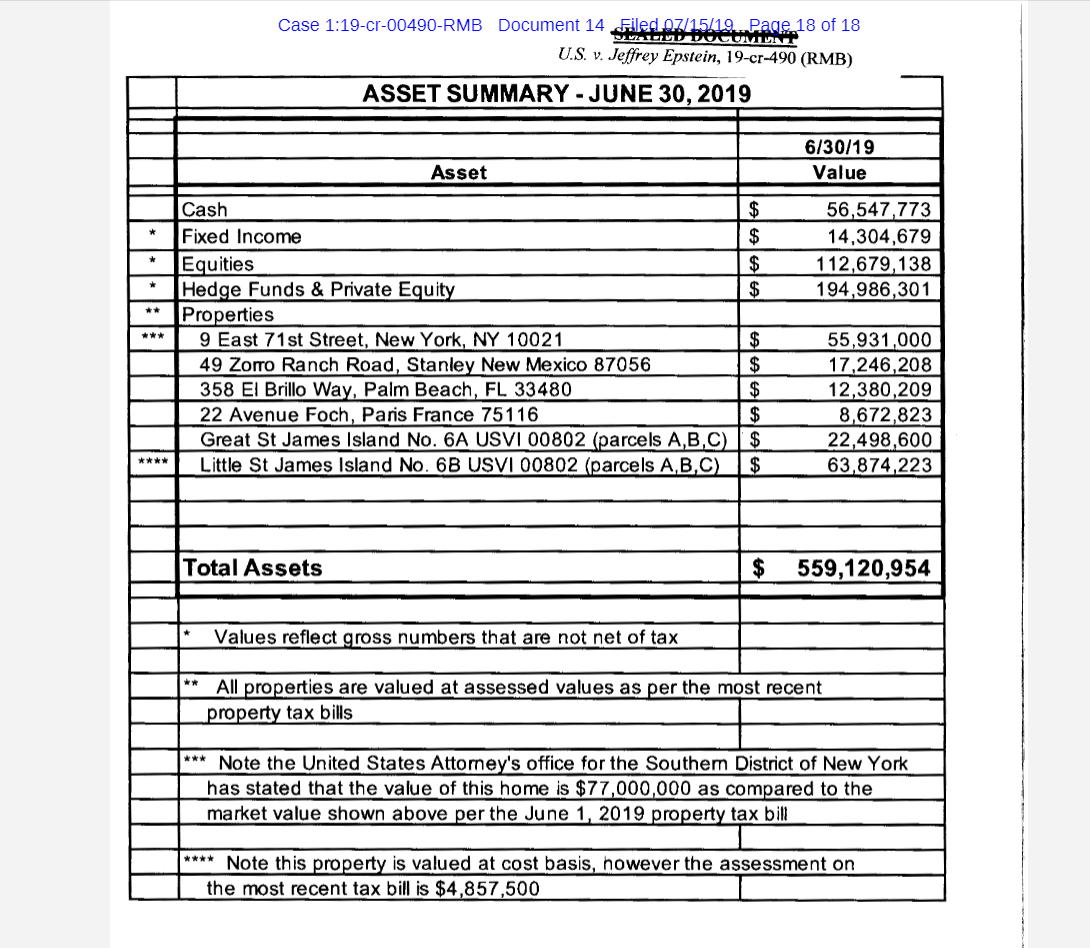 Jeffrey Epstein attends Launch of RADAR MAGAZINE at Hotel QT on May 18, 2005.

Jeffrey Epstein has a ton of cash on hand — but the accused child sex trafficker has even more more money tied up in hedge funds, private equity plays and real estate, a newly unsealed court document reveals.

The document, filed by Epstein’s criminal defense lawyers and unsealed Monday, shows that the financier and registered sex offender is worth an estimated $559,120,954.

The filing was made last week as Epstein, 66, seeks release on bail following charges that he trafficked underage girls so they could visit his Manhattan and Palm Beach, Florida, mansions, where he allegedly sexually abused them.

Some of the dozens of girls that Epstein is accused of exploiting from 2002 to 2005 were as young as 14 years old, according to prosecutors. Those prosecutors, who want to keep him locked up pending trial without bail, have slammed the financial disclosure by Epstein for lacking details.

“His token effort to account for his finances makes painfully clear the need for detention,” prosecutors wrote in a filing to the judge arguing that Epstein should be locked up pending trial.

Epstein, a former friend of presidents Donald Trump and Bill Clinton, has pleaded not guilty. He pleaded guilty in 2008 to a Florida state charge of procuring an underage girl for prostitution, and served a 13-month jail term.

Judge Richard Berman on Monday said he would rule on whether to grant bail in the case on Thursday, and ordered Epstein’s assets disclosure unsealed.

Epstein’s lawyer told Berman he was authorized to consent to a bail package with strict conditions in the amount of up to $100 million.

A big chunk of Epstein’s assets, roughly $195 million worth, is in hedge fund investments and private equity, according to the financial disclosure in Manhattan federal court.

Another $112.7 million of assets comes in the form of equities. Epstein listed just $14.3 million from fixed income securities.

More than $179 million in stated assets comes from real estate, including Epstein’s private island in the U.S. Virgin Islands — Little St. James — which is valued at $63 million.

That island has been derisively nicknamed “Pedophile Island” by locals.

Another island owned by Epstein in the Virgin Islands, Great St. James, is valued at almost $22.5 million.

Epstein’s defense lawyers value his Upper East Side townhouse in Manhattan at $55.9 million, citing his Jan. 1 property tax bill. But they note that federal prosecutors have claimed that the residence is worth $77 million.

Rounding out the real estate portfolio is Epstein’s New Mexico ranch, his Palm Beach home and a residence in Paris, France.

Epstein was arrested July 6 at at New Jersey airport after flying there on a private plane from France.

WATCH: The public is entitled to know where Epstein’s assets are from, says NYT’s Jim Stewart