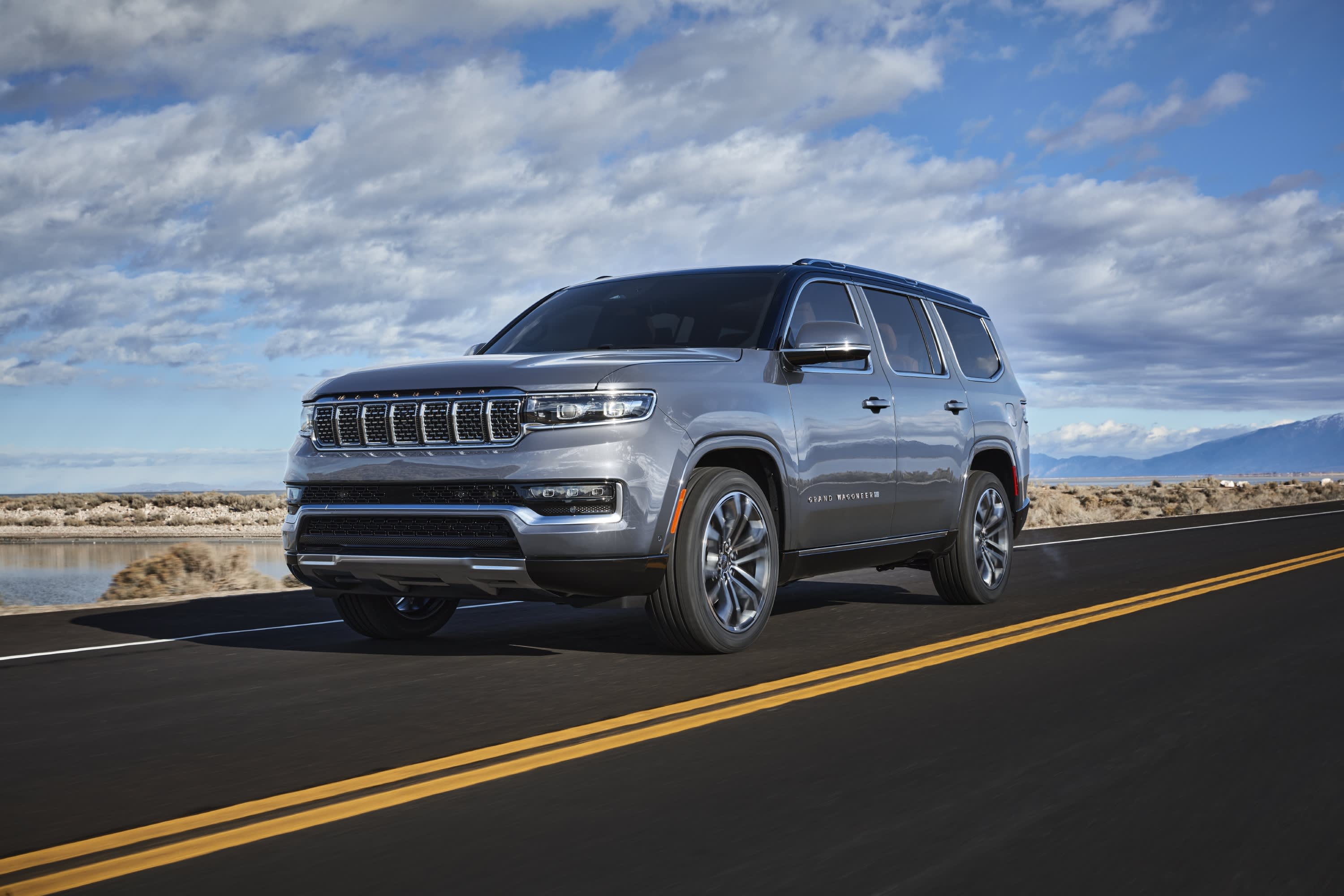 2022 Jeep Grand WagoneerJeepDETROIT – Jeep’s long-awaited Grand Wagoneer SUV will push the quintessential off-road brand further into luxury vehicles with a fully loaded model topping $111,000 when it goes on sale later this year.The new three-row SUV will test whether Jeep can expand its product range into the lucrative luxury SUV segment and attract new customers from the likes of the Cadillac, Lincoln and Land Rover. Jeep has grown its mainstream SUVs into a full lineup of vehicles in recent years amid an influx of new competitors.The Grand Wagoneer will be the premium sibling to a less expensive SUV called the Wagoneer, which will start at $57,995. Both vehicles are the same size, but the Grand Wagoneer – starting at $86,995 – features a slightly different exterior design, a more powerful engine and exclusive amenities inside. Both vehicles are scheduled to be unveiled online Thursday.”Wagoneer and Grand Wagoneer are born from Jeep, but their character is different than the rest of the brand,” Jeep CEO Christian Meunier said during a media briefing ahead of the unveiling. “They are modern and forward-looking. There is a pure DNA we’re building on to make these products absolutely unique.”Screens galoreWhile the outside of the Grand Wagoneer is unmistakably a Jeep, the interior of the SUV may look unrecognizable to current owners. It has up to 75 inches of screens, including an available 10.25-inch touchscreen in front of the passenger that can stream videos and Amazon’s Fire TV and control certain functions such as navigation and exterior cameras.2022 Jeep Grand WagoneerJeepThe vehicle’s interior also features premium materials such as Satin American Walnut wood, aluminum and Nappa or Palermo leather-trimmed, 24-way power seats.”You can take this Grand Wagoneer interior up against anything in the marketplace,” Jim Morrison, head of Jeep’s North American operations. “I’m not just saying any SUVs, you can take this up against anything in the marketplace.”Overall, the Wagoneer has fewer standard features and premium materials compared with the Grand Wagoneer. For example, the less expensive Wagoneer features up to 50 inches of screens compared with 75 inches. Some of the screens are smaller and it does not offer touchscreens for comfort settings. Amazon Fire TV is available in both as well as a passenger touchscreen, which is blocked from the sight of the driver through a filter.2022 Jeep Grand WagoneerJeepJeep said both Wagoneer models will eventually offer a hands-free driver assist system on “approved roadways,” however a spokesman declined to offer additional details. The vehicles will launch with a driver-assist system that will be able to control the vehicle’s speed, braking and spacing between other vehicles, but drivers will need to keep their hands on the wheel.WagoneerThe Wagoneer and Grand Wagoneer are expected to arrive in dealerships in the second half of 2021, including a top-end model Grand Wagoneer Series III that starts at $103,995. Jeep is taking $500 refundable deposits for both vehicles through Jeep’s website starting Thursday.2022 Jeep Grand WagoneerJeepJeep dealers must be certified to sell the models. Certification includes training and an undisclosed investment. They must fulfill 10 “promises” for Wagoneer and Grand Wagoneer owners that range from free Wi-fi and car washes upon service visits to a “high-tech and efficient sales and service experience.” The automaker also will offer 24-hour customer support for owners.”Customer satisfaction with both the product and how they are treated throughout the entire purchase process is paramount to the entire Wagoneer and Grand Wagoneer experience,” Meunier said.The Wagoneer and Grand Wagoneer names were previously used by Jeep for large SUVs from 1963 until 1991. The company had promised to resurrect the Wagoneer name for nearly a decade as a way to better compete in the highly profitable large SUV segment.The seven- or eight-passenger vehicles are largely based on a concept version of the vehicle that the company unveiled last year. The concept featured similar design elements as well as much of the interior’s features and screens. Notable missing elements from the concept include an illuminated grille, full glass roof and plug-in hybrid gasoline-electric engine.V-8 enginesJeep has announced all of its new models will offer some form of electrification, such as the plug-in hybrid system, however executives declined to comment on the alternative powertrains for the Wagoneer and Grand Wagoneer. Meunier said the brand “has a plan for electrification.”2022 Jeep Grand WagoneerJeepJeep’s new parent company, Stellantis – the product of a $52 billion merger between automakers Fiat Chrysler and Groupe PSA –  plans to offer an array of all-electric or hybrid vehicles through 2025.The Wagoneer comes standard with a mild hybrid 5.7-liter V-8 with 392 horsepower and 404 foot-pounds of torque. The Grand Wagoneer is standard with the 6.4-liter V-8 engine with 471 horsepower and 455 foot-pounds of torque. Each engine is paired with an eight-speed automatic transmission.The hybrid engine features a 48-volt battery pack to provide better fuel economy and quicker acceleration as well as other benefits.Jeep did not release fuel economy estimates for the vehicles.

Watch live: President Biden meets with CEOs from J&J and Merck
Denmark, Norway and Iceland suspend use of AstraZeneca Covid vaccine over reports of blood clots
To Top
error: Content is protected !!