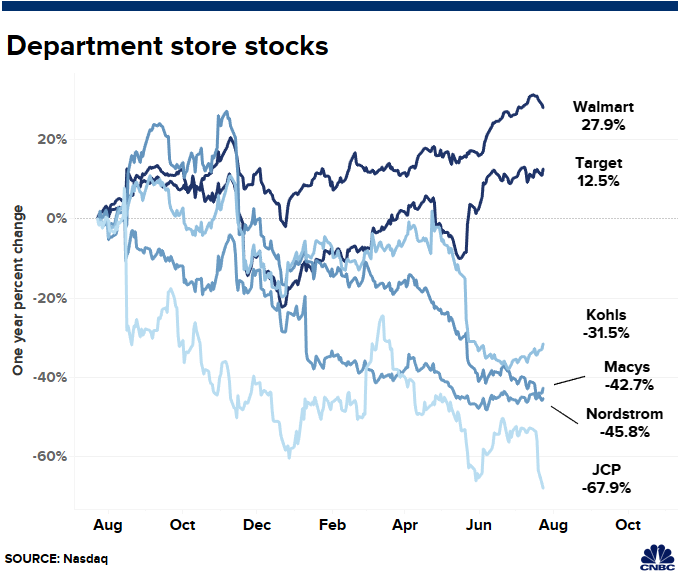 A Nordstrom store in Irvine, California.

It’s been a similar story for retail stocks. There’s a growing gap between the strong and the weak — the retailers that are struggling with a buildup of inventory ahead of the holiday season, and those that have a better grip on what consumers are looking for.

Retail earnings overall this quarter aren’t looking good when compared with a year ago. A drop is being forecast for the industry. For a lot of companies, the need to discount items to move out-of-season merchandise off shelves is going to end up weighing on profitability. And department store chains in particular are still struggling to grow sales, whereas Walmart and Target have found pockets of growth in grocery, through their e-commerce businesses and with their in-house brands.

Walmart and Target furthermore have been able to compete with Amazon by giving customers the option to buy items online and then pick them up at stores that same day. They’ve been ahead of many other retailers with this approach. It boosts digital sales and store traffic. Walmart’s e-commerce sales surged 37% in the latest quarter. Target’s digital sales were up 42%.

As a whole, the retail industry posted earnings growth of 1.7% during the first quarter, according to Retail Metrics, which monitors about 150 retailers’ financial reports. For the second and current quarter, earnings are forecast to drop 4.2%, said Ken Perkins, president and founder of the retail research firm. And if this happens, it would mark the biggest quarterly decline in retail earnings since a 4.5% drop back in the first quarter of 2014.

“The sector is crying out for innovation,” said Craig Johnson, president of retail advisory firm Customer Growth Partners. With “the Amazons of the world” gaining market share — meaning “you can find almost everything online somewhere, cheaper,” Johnson said — some retailers’ margins are going to be pressured “until the people [working there] come up with new product.”

Apparel spending is also forecast to drop this year and again next year, with consumers increasingly cutting back on the share of their wallets devoted to clothes. Total apparel sales in the U.S. amounted to $216.4 billion as of the 12 months ended May 2019, according to NPD Group’s consumer tracking service. The firm predicts total apparel spending will drop 1% to 3% this year. And a rebound isn’t expected until 2021, NPD said.

If the majority of your business is devoted to selling clothes, you could be in trouble. Department store chains are much more reliant on the apparel category than Walmart and Target, which have large electronics and food businesses.

The fashion alternatives that consumers are turning to for clothes are also starting to take attention away from department store chains. That includes online style service Stitch Fix, rental plans like Rent the Runway, or trendy start-ups The Real Real and Revolve. More and more apparel spending is also moving online. RBC Capital Markets has estimated about 30% of apparel in the U.S. is purchased online today, but that will be 40% by 2023.

Meanwhile, the upcoming back-to-school shopping season — which can be a good barometer for how companies are going to perform during the all-important holiday season — isn’t looking like it will give a boost to many, especially department stores.

UBS’ retail analysts said in a note to clients this week that their U.S. softlines spending forecast, which predicts sales of clothing and accessories at retail stores in the U.S. over the span of the next 90 days, is calling for a 0.9% decline year-over-year in August and September, and a 0.5% drop in October.

“However, we don’t see buying opportunities in these names. These stocks likely need improving sales growth rates to catalyze stock price upside and we think this scenario is unlikely over the next three months.”

This all could end up being a recipe for disaster for some retailers, more so those that have already been struggling to give shoppers a reason to seek them out. With brands like Nike and Coach investing more in their own bricks-and-mortar stores and websites today, it lessens the need for a middleman like a department store operator to sell their sports bras and handbags.

Faced with these challenges, Penney, with its shares trading under $1, has hired advisors to deal with debt and “improve [its] capital structure.” (The company said it didn’t hire any firms to prepare for an in-court restructuring or bankruptcy, as some had suspected was the case.)

High-end department store operator Barney’s is making preparations for a bankruptcy filing that could come as soon as this month, people familiar have told CNBC. Saks owner Hudson’s Bay Company is considering going private after its shares fell nearly 50% this year through June.

Nordstrom, which is known in the industry for having stronger merchandising and better customer service compared with its peers, is even getting dragged down with the others. Its shares are trading $20 per share lower than a $50 per share buyout offer it rejected two years ago as being too low.

Wall Street sees plenty of reasons to steer clear of the space.

How Dannon dairy failed to win over Indians

Bleacher Report going all in on sports gambling