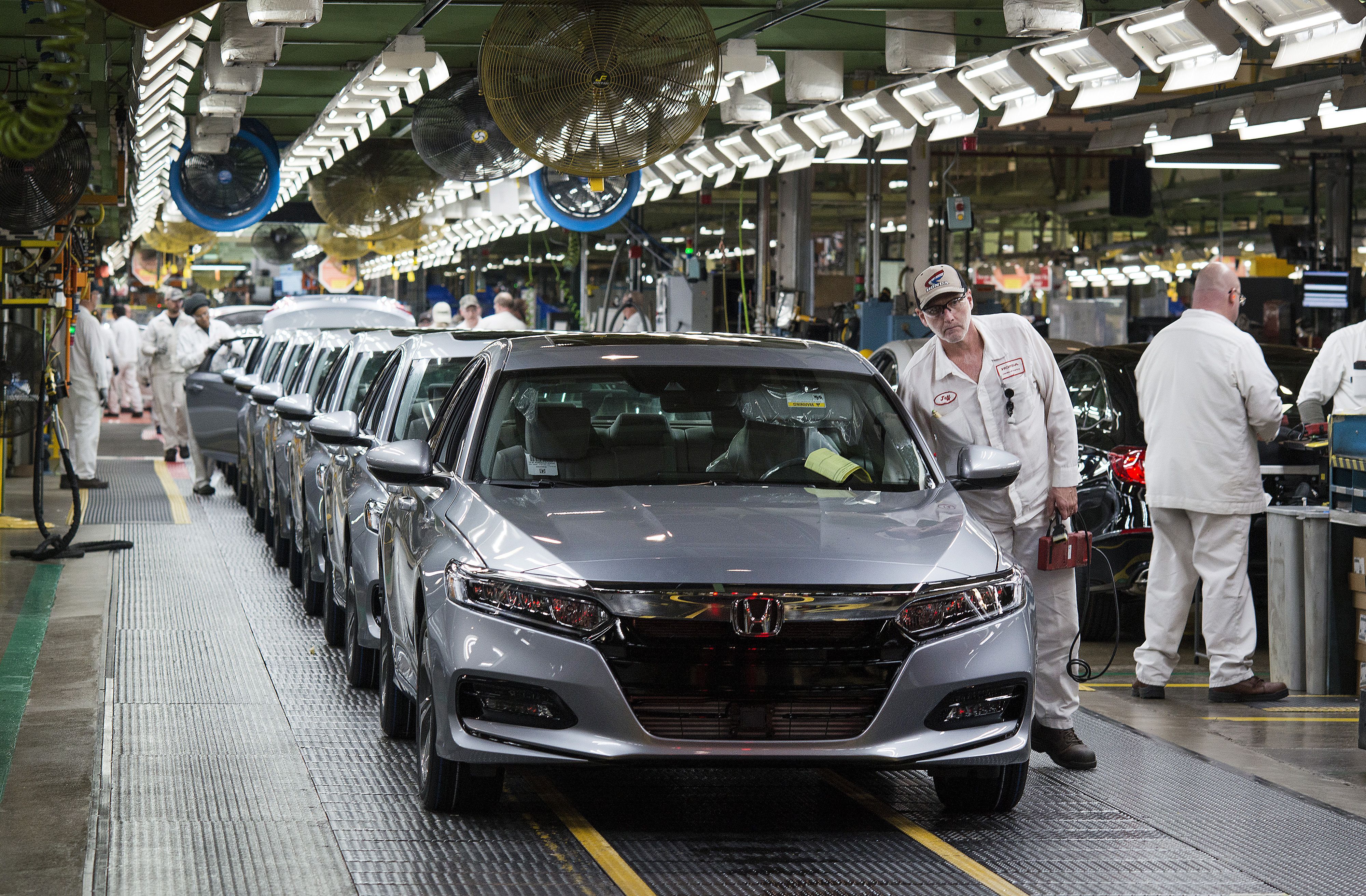 Employees look over 2018 Honda Accord vehicle before being driven off the assembly line at the Honda of America Manufacturing Inc. Marysville Auto Plant in Marysville, Ohio, U.S., on Thursday, Dec. 21, 2017.

“We are dismayed to hear a message suggesting that our long-time contributions of investment and employment in the United States are not welcomed,” said Toyoda, chairman of the Japanese Automobile Manufacturing Association.

Toyoda said he was “deeply disappointed” in Trump and that trade restrictions “would deliver a serious blow to the U.S. auto industry and economy.”

The group released new data that shows they have collectively invested about $51 billion in manufacturing in the United States over the last several decades. The group also estimates its members have created almost 94,000 manufacturing jobs at their U.S. plants and more than 1.6 million indirect jobs, like at dealerships and suppliers in the U.S.

“These numbers speak for themselves about JAMA member companies’ long history of local contributions and commitment as U.S. corporate citizens, and we are certain that neither imported vehicles and parts nor our American operations ‘threaten to impair’ the U.S. national security,” Toyoda said.

“We think this is an incredible achievement for international car companies,” Manriquez said. “We’ve got a long history of continuing to strengthen the manufacturing base in the U.S.”

Japanese automakers have a wide reach in the U.S., according to the JAMA data.

JAMA manufacturers, including Honda, Mazda, Mitsubishi, Nissan, Subaru and Toyota, have 24 manufacturing plants, 45 research and development design facilities and 39 distribution centers across 28 states in the U.S.

Japanese manufacturers today build more than a third of the vehicles manufactured in the U.S., according to the data. In 2018, JAMA manufacturers built 3.7 million vehicles and 4.4 million engines. More than 420,000 cars and trucks built by Japanese companies were exported from the U.S. that year.

JAMA said Japanese brands have produced more than 84 million vehicles in the U.S since 1982 and built more than $1 trillion in U.S. auto parts that were purchased since 1986.

Vehicles sit on the production line during final inspections at the Nissan Motor Co. manufacturing facility in Smyrna, Tennessee.

Manriquez said Japanese vehicles have become so popular in the U.S. because of the way they’re built.

Trump on Friday issued a new directive giving Japan and the European Union six months to renegotiate their trade deals with the U.S. so that the “American automobile industry, its workforce, and American innovation” are protected. Trump said U.S.Trade Representative Robert Lighthizer will “address the threatened impairment” of national security from auto imports and will negotiate a deal that protects American owned automakers.

Following Trump’s proclamation, Toyota Motor said it “sends a message to Toyota that our investments are not welcomed, and the contributions from each of our employees across America are not valued.”

The company added it hopes trade negotiations can be resolved quickly “and yield what is best for the American consumer, workers and the auto industry.”

Though the tariff negotiations are “early days at this point,” Manriquez said tariffs are a bad policy that can cause cost increases and hurt consumers and global competitiveness. He added that Japanese automakers are “truly integral to the U.S. auto industry.”