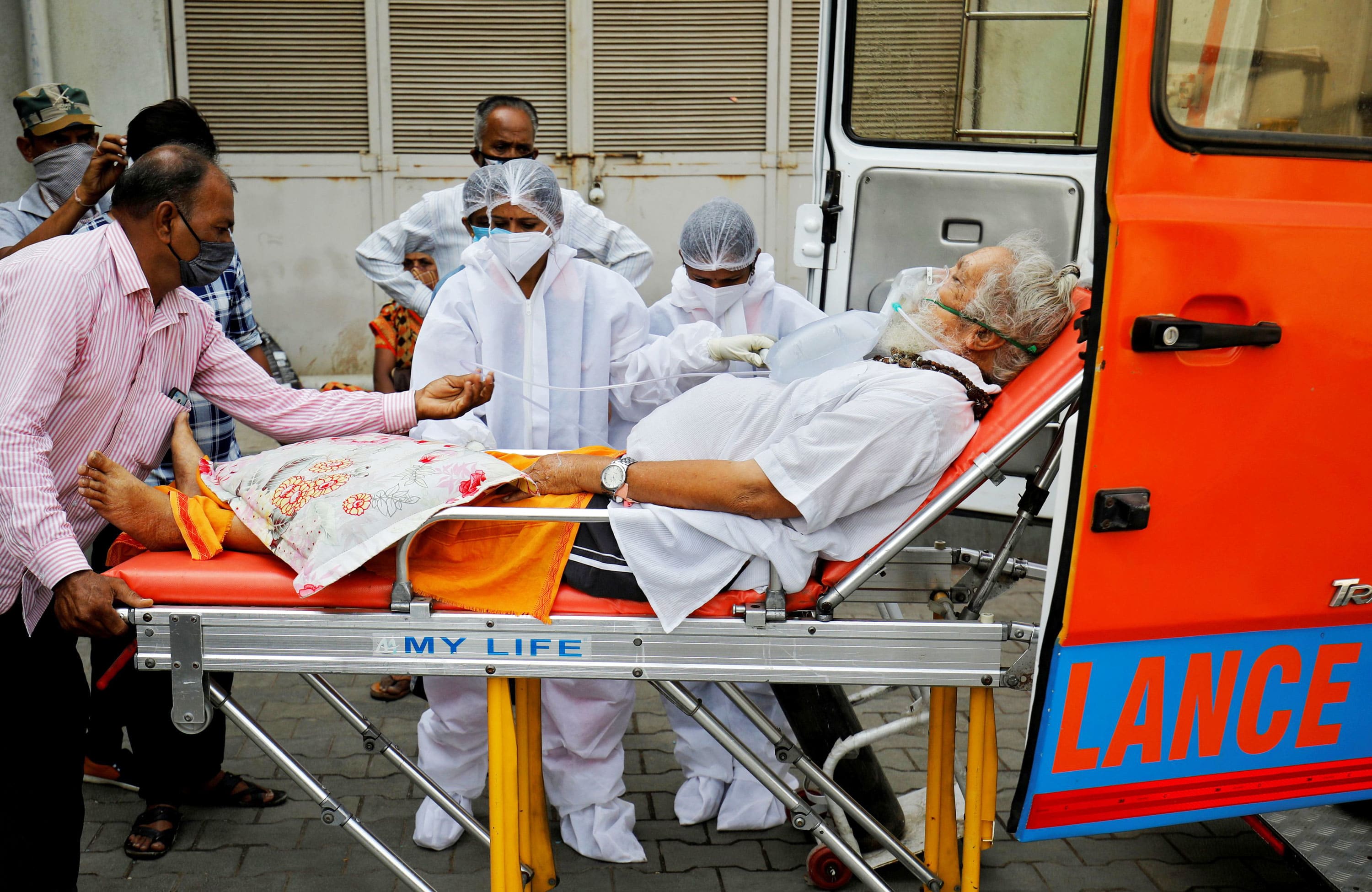 A patient wearing an oxygen mask is wheeled inside a COVID-19 hospital for treatment, amidst the spread of the coronavirus disease (COVID-19) in Ahmedabad, India, April 26, 2021.Amit Dave | ReutersIndia reported a record daily death toll on Wednesday as total Covid-19 fatalities crossed the 200,000 mark.Government data showed at least 3,293 people died over a 24-hour period. Overall cases also rose by a record 360,960 reported infections, marking India’s seventh consecutive day of over 300,000 new infections.The country’s total number of Covid cases is just below 18 million while the death toll stands at 201,187. Recent media reports, however, suggest the daily fatality number may be underreported.So far in April alone, the South Asian nation has reported more than 5.8 million new cases, sending the country’s health-care system to the brink.The international community responded with promises to send India desperately needed aid. The United States said it would send raw materials required for the South Asian country to manufacture AstraZeneca’s vaccine.India has so far administered more than 145 million vaccine doses, according to health ministry data. But, as of Tuesday, only around 23.9 million people have received their second doses.India’s Covid variant?Experts fear that a mutated variant of the coronavirus is responsible for the dramatic surge in cases during the second wave. Before the resurgence, India reported an average of around 10,000 new cases daily.Since last year, the virus has mutated multiple times. The World Health Organization classifies those variants as either “variant of interest” or “variant of concern.” Variant of concern typically refers to a variant that shows an increase in transmissibility and more severe disease, including greater rates of hospitalization or death.WHO classified the B1617 variant, with multiple sub-lineages that have slightly different characteristic mutations, as a variant of interest in its weekly epidemiological update on the pandemic. It was first detected in India last October but, as of Tuesday, was present in at least 17 countries including the United States, the U.K. and Singapore.The international health body said in its report that the B1617 variant is circulating in India alongside other variants of concern as well as variant B1618, which was detected in some states. The WHO said these variants may be collectively playing a role in the current resurgence.RamificationsThe Indian government faces mounting criticism for letting large crowds gather, mostly without masks, for religious festivals and election rallies in various parts of the country.Last year’s better-than-expected handling of the first wave led to a sense of complacency within the political class and subsequent questionable decisions contributed to the surge, according to Akhil Bery, South Asia analyst at political risk consultancy Eurasia Group.Among those decisions, Bery noted the government allowed the weeks-long “Kumbh Mela” religious festival to take place, which reportedly saw hundreds of thousands of people take a dip in the Ganges river. That, he said, became a super spreader event as did election rallies held by various parties, including Prime Minister Narendra Modi’s Bharatiya Janata Party, in the eastern state of West Bengal.”There has been some questionable decision making here and this is a big, political challenge for Modi, at least in the short term,” Bery said Wednesday on CNBC’s “Squawk Box Asia.””During last year’s surge, there was a general expectation that India’s health-care system would collapse. It ultimately didn’t,” he said, adding, “This led to a sense of complacency within the political class, within people … but, ultimately, that complacency fed into this mentality and now we’re seeing the end results of that.”