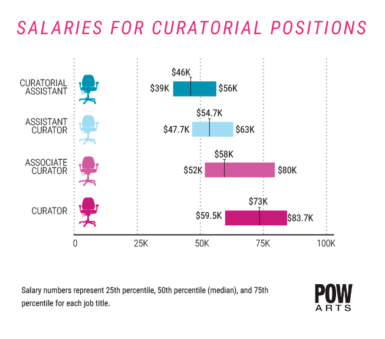 Within the art world, it’s often assumed that having a master’s degree leads to much better pay. But, according to the first “POWarts Salary Survey,” a report on wages and various sectors of the art industry conducted by the Professional Organization for Women in the Arts, the data suggests otherwise.

Findings pertaining to benefits, wages, and rates are included in the “POWarts Salary Survey,” which was released on Thursday and is available in full on the organization’s website. It is the latest development in a push for greater workplace transparency across the U.S. art world.

“POWarts was founded with a mission to provide information,” Sara Kay, who created POWarts in 2008 and runs a New York gallery, told ARTnews. “There’s not a lot of resources in the field for people who work in it.” The survey is intended to “provide hard information that relates to business so that we can better develop careers.”

Using a study sample of 997 respondents, the survey’s organizers broke down the responses for the for-profit and non-profit sectors. About 89 percent of respondents were women (“I am sorry to see that more men did not participate,” Kay said), and a little more than half were between the ages of 25 and 34.

Generally, the results “fell in line with what you might expect in most industries,” said Ging Cee Ng, who, along with Maricar Mabutas, was one of two economists who helped work on the survey. Still, Ng said, a few results stand out.

One is the group’s findings about how much one makes depending on the amount of art-world experience one has. Respondents who work at for-profit institutions who had between 15 and 20 years of experience received a median annual salary of $92,500. But respondents in that sector with more than 20 years of experience in the art world can have a lower salary, with a median of $85,000. “The longer you work in the art industry doesn’t always have a good bearing on salary,” Ng said.

Other perhaps surprising findings can be found in the survey’s benefits section. Less than 60 percent of respondents in both the non-profit and for-profit sectors said they receive paid family leave, and just over half the for-profit sector respondents have retirement plan benefits. (By contrast, according to the Bureau of Labor Statistics, only 17 percent of Americans have access to paid family leave.) Yet, according to POWarts, “A large percentage of respondents did not know whether these benefits were or were not offered, indicating a broader trend in the field.”

The survey is meant, in part, to provide information in what Kay called an “opaque industry,” and comes amid a wave of union organizing, at the New Museum, the Brooklyn Academy of Music, and the Frye Museum of Art, and following the circulation of an online document that discloses art workers’ salaries.

For Kristen Becker, the director of museum engagement at Marianne Boesky Gallery, of New York and Aspen, who is a member of POWarts’s steering committee, the survey will help workers feel more open about discussing the terms of their employment with their colleagues. “It’s usually later in one’s career that one starts to feel comfortable sharing salaries,” Becker said. “We wanted to share some hard numbers.”