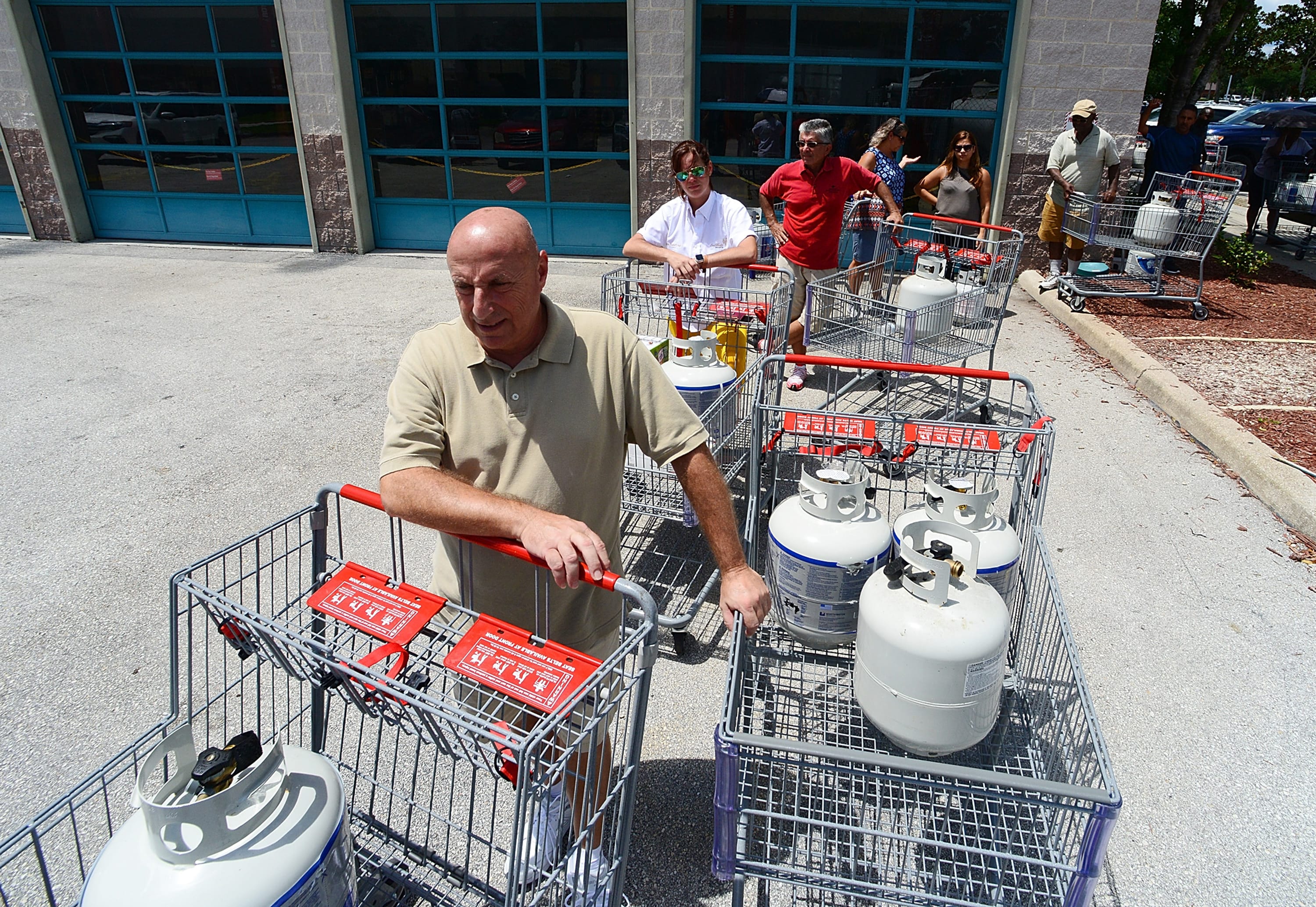 Gary DAngelo (L) and central Florida residents wait on the line to buy propane in preparation for hurricane Dorian at BJ’s store on August 29, 2019 in Orlando, Florida.

Hurricane Dorian has been upgraded to a major and extremely dangerous 115-mph major hurricane as it approaches Florida, according to the National Hurricane Center.

Forecasters expect the hurricane will hit the east coast of Florida on Tuesday morning, while other models predict it will rip through central Florida. Dorian could unleash catastrophic winds, heavy flooding and life-threatening storm surge exacerbated by high tides at the coast.

Florida residents are scrambling to secure supplies at crowded grocery stores and waiting for hours at gas stations that are running out of fuel.

Dorian could also be the first hurricane of Category 4 or higher to hit Florida since 1992, when Hurricane Andrew came ashore near Homestead, about an hour from Miami, killing 61 people and causing $27 billion in damage.

“Two days ago, no one was worried,” said Sarah Lam, a clinical researcher who lives in Miami. “Everyone’s in survival mode now.”

“As soon as I went to the grocery store, shopping carts were gone, people were bringing their own luggage so they could roll the water gallons away and shoving past each other.”

“But all the water was gone. And the majority of gas stations are out of gas,” she added.

The entire state of Florida is under a declaration of emergency. No evacuations were ordered as of early Friday, but many are expected as the storm’s path becomes clearer. If Dorian hits Florida, it would be the fourth hurricane to do so since 2016, after Hermine in 2016, Irma in 2017 and Michael in 2018.

The Florida National Guard has activated 2,500 members, with another 1,500 on standby. The state has also ordered a million gallons of water and sent 860,000 bottles of water to counties.

Florida Gov. Ron DeSantis warned residents to load up on a week’s worth of food, water and medicine, as well as prepare for power outages for multiple days. On Friday, people were racing to finish storm preparations, cleaning out grocery stores shelves and causing delays at gas stations as cars lined up for fuel.

Residents shop at a Walmart store on August 29, 2019 in Orlando, Florida.

The gas stations have been running out of fuel rapidly, reminiscent of Hurricane Irma in 2017, which hit Florida and triggered gas outages across the state. Some residents are even leaving their cars at the stations.

In response, the state has set up police escorts to deliver more gas to stations, and waived service and truck rates for fuel trucks, DeSantis said on Friday morning. Some officials expect that fuel shipments could be delayed.

However, AAA Florida assured residents that there was still plenty of gas to fill cars and the gas tanks for generators, as long as port terminals remain open and trucks continue to make deliveries. And Colonial Pipeline, which deliveries gas and diesel fuel, said it was operating normally and doesn’t plan to shut down.

“Gas stations can only hold so much fuel at a time. As hurricanes approach, retailers run out of gasoline, like stores run out of water,” said AAA spokesman Mark Jenkins. “However, work will continue as long as it is safe, to resupply those tanks. Although there is still plenty of gasoline in the state, the challenge is getting it from the terminals to the pump.”

“Florida will continue receiving shipments of gasoline, as long as the ports remain open. Drivers of fuel tankers will continue making deliveries until it is no longer safe to do so.”

President Donald Trump on Friday ordered federal assistance to supplement state and local responses to the storm, after DeSantis extended an emergency declaration in all the state’s 67 counties.

The president also canceled a trip to Poland on Thursday to ensure resources are directed for the storm, adding that the storm “could be an absolute monster.”

“The biggest concern will be Dorian’s slow motion when it is near Florida, placing some areas of the state at an increasing risk of a prolonged, drawn-out event of strong winds, dangerous storm surge, and heavy rainfall,” the National Hurricane Center said in a Friday morning advisory.

“Residents should have their hurricane plan in place, know if they are in a hurricane evacuation zone, and listen to advice given by local emergency officials,” the Hurricane Center said.

What Facebook and Google can learn from the Internet Explorer case