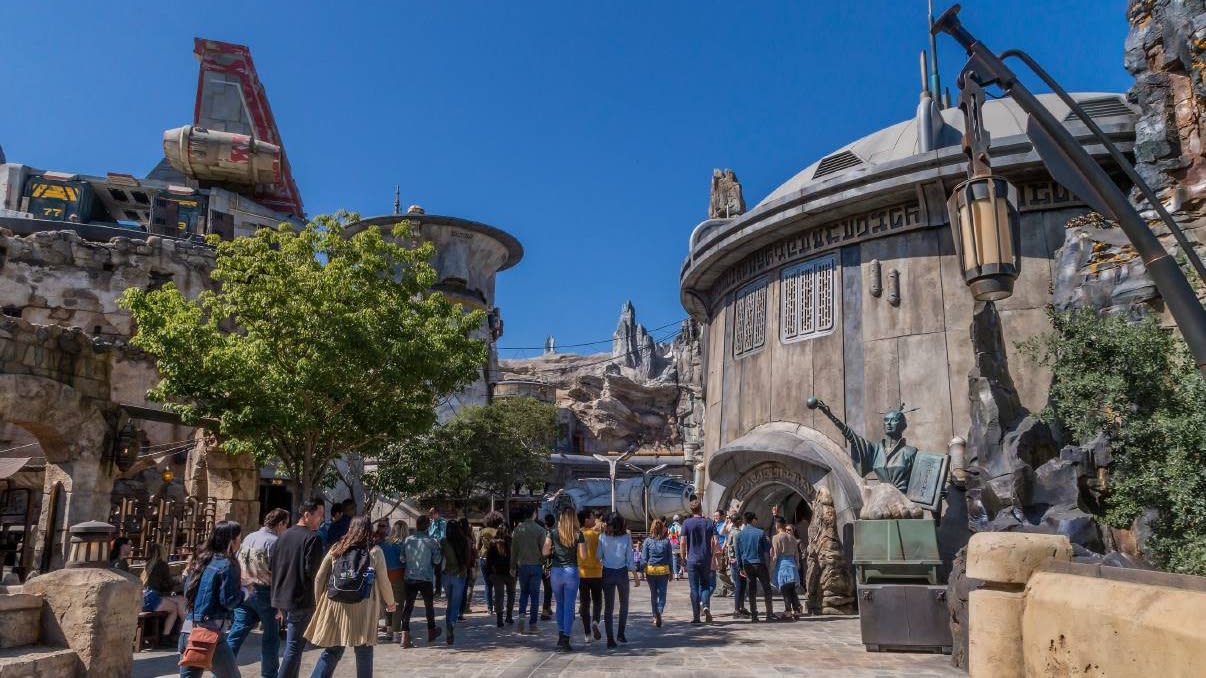 If you are one of the lucky few headed to Batuu this month, you’re going to need a plan to make the most of your trip to a galaxy far, far away.

The matching 14-acre lands of Star Wars: Galaxy’s Edge debut on May 31 at Disneyland Resort in Anaheim, California, and on Aug. 29 at Walt Disney World Resort in Orlando, Florida.

The attractions, estimated to each cost about $1 billion, promise to bring many Disney park veterans back for return visits and lure a new generation of first-time visitors. Just leave your Jedi cloak and Sith robes at home — only fans under the age of 14 are allowed to don their movie-accurate costumes. Older fans are still encouraged to “Disney bound,” aka wear outfits inspired by their favorite characters.

The new lands are set on Batuu, a new planet not yet seen on film. It’s a thriving port filled with rogue traders, droids and unique alien species.

Here’s everything you need to know about exploring this new planet:

These are the droids you’re looking for

The new land is expected to draw such large crowds that Disney instituted a free reservation process for the first month of its debut. Last month, fans were permitted to sign up for 4-hour windows to visit the park between May 31 and June 23. Within two hours all reservation slots had been filled.

Guests during the initial reservation period will be given wristbands with colors corresponding to their reservation time window. These wristbands will help cast members — and stormtroopers — identify park guests that have stayed longer than their allotted time.

Beginning June 24, the Disney park will swap over to a new reservation system. Guests will need to request to join a boarding group in order to visit the land. These boarding groups will be sent push notifications to their phones when it is their turn to enter Galaxy’s Edge. Those that do not download the app, will be able to gain admission at select ticketing locations within Disneyland Resort.

“They haven’t announced what they’ll do for crowd control,” Susan Veness, author of “Walt Disney World Hacks, ” said. “But we suspect they’ll hold people and only allow a certain number in at a time.”

Disney has warned that Galaxy’s Edge will be subject to capacity limits and if the land becomes overcrowded, fans will not be guaranteed entrance to the area or to its rides.

Fans should know that Galaxy’s Edge won’t be part of the early admission program, Magic Morning at Disneyland. The land will open at the regular park time, said Guy Selga, a writer and researcher at TouringPlans.com, which publishes the “Unofficial Guide ” series of Walt Disney and Disneyland books.

But at Walt Disney World in Florida, Star War’s: Galaxy Edge will be a part of the Extra Extra Magic hours, which feature a 6 a.m. opening time at Disney’s Hollywood Studios for Disney Resort guests. “Guests willing to wake up extra early should be able to get on Millennium Falcon: Smugglers Run with minimal wait,” said Selga, who said he will likely be at the front of the line.

‘Never tell me the odds’

Disney park guests will be able to explore the planet’s Black Spire Outpost and shops as well as experience two new signature rides: Millennium Falcon: Smugglers Run and Star Wars: Rise of the Resistance. (Though the latter won’t open in Anaheim until later this year, after the park’s grand opening.)

For a lot of people, the most exciting aspect about the Millennium Falcon ride will be exploring the interior of the ship itself, said Selga. “Groups of six will then board the cockpit and pilot or be gunners and engineers.”

How well guests work together while piloting Han Solo’s ship — yes, you get to flick switches and everything — will determine if they return to port unscathed or with a few dents in the hull.

“It’s up to you and your flight crew to determine the fate of your ship,” Asa Kalama, executive creative director at Walt Disney Imagineering, said during a Star Wars Celebration panel in Chicago last month.

You may want to get in line for the Millennium Falcon ride early if you’re one of the first guests to adventure through the new park.

“We’ve heard they’ll simply stop admitting guests on to rides when their window has closed,” Selga said. “This could all change on or after the land opens on Friday as Disney reacts to crowd patterns and wait times.”

But, don’t fret about long wait times. Disney is allowing guests who are in line for Millennium Falcon: Smuggler’s Run to purchase snacks, use the restroom, interact with Disney workers (known as cast members) and play in-queue games through the Play Disney Parks mobile app.

“Fastpass will not be available when the land opens,” said Selga. “Disney hasn’t been clear about if or when they’ll ever be offered for Galaxy’s Edge attractions. Disney has also not announced any tours or VIP experiences. This could change after the land opens.”

The second ride in the park, Star Wars Rise of the Resistance, is shrouded in a bit more secrecy.

CEO Bob Iger teased investors in March that the ride, which will open at a later date, is “the most technologically advanced and immersive attraction” the park has ever seen.

“But we do know there will be parts of the ride where guests will be on a Resistance shuttle and be caught by a First Order Star Destroyer, where they will disembark and encounter storm troopers and other Star Wars characters,” said Selga.

Beyond the rides, Disney promises Star Wars-themed entertainment and special merchandise, such as build-your-own lightsabers ($199, plus tax) and droids (starting at $99.99, plus tax).

Oga’s Cantina is the local hot spot for food and drinks at the Black Spire Outpost. Patrons can sample braised Shaak roast, oven-roasted Burra fish and smoked Kaadu ribs, as well as a number of alcoholic and nonalcoholic beverages, including a a Jedi Mind Trick cocktail, which has botanical flavors that are designed to start and finish with different flavors

Additionally, collectors will be keen to pick up unique drink coasters only found at Oga’s.

Many of these items are not available in any other location.

It’s usually a good idea to visit park restaurants outside of traditional eating hours. You can skip the lunchtime rush at Docking Bay 7 Food and Cargo and satiate yourself with Kat Saka’s Kettle popcorn and a glass of blue or green milk from the Milk Stand.

“More and more, our guests want to lean into these stories; not just be a spectator. We’re giving them the opportunity to do just that in this land, with a new level of detail and immersion,” said Scott Trowbridge, portfolio creative executive at Walt Disney Imagineering. “Star Wars: Galaxy’s Edge redefines what a Disney experience can be.”

Savi’s workshop is another destination fans may want to queue for early in their visit to Batuu. The location is hidden from the First Order and is a place where guests will be able to make their own lightsabers. Disney has already warned that this experience may be subject to availability and reservations may be required.

During the cast member and Lucasfilm employee tour of the park last week, it became clear that this little workshop was going to be very busy once the park opened.

May the force be with you

“It’s going to break park records and increase attendance like never before,” said Scott Smith, an associate professor at the University of South Carolina’s College of Hospitality, Retail and Sports Management. “I’m a numbers guy, but it’s so unprecedented I’m hesitant to put numbers out there. But I will say it will probably surpass any increases we’ve seen in any theme park anywhere.”

While Smith is a Disney expert and a Star Wars fan, he plans on staying away from the Disney parks for the first year the new Star Wars attraction is open to wait for the kinks to be worked out.

That’s good advice, said Veness. “But we also know diehard fans want ‘bragging rights’ that they were there the year it opened. So they’ll just have to be extremely patient, as they were for Flight of Passage in Pandora at Disney’s Animal Kingdom.”

Lexus has much riding on the launch of the 2020 RX crossover
Amazon’s Bezos promoted AWS executive Peter DeSantis to his ‘S-team’
To Top
error: Content is protected !!