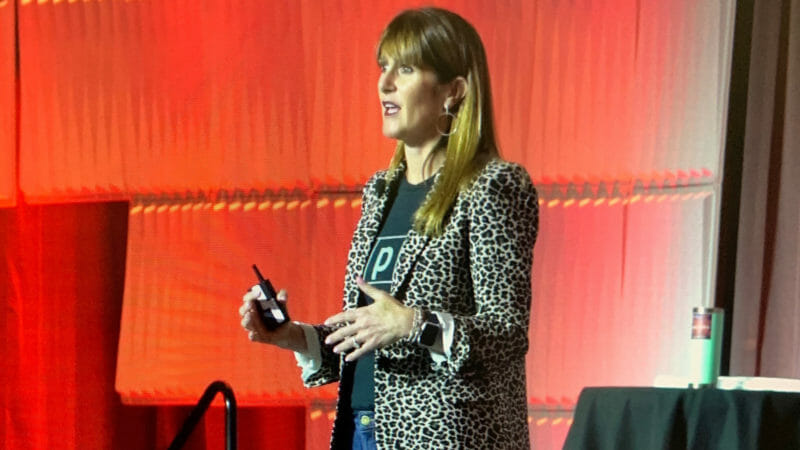 Meg Goldthwaite, Chief Marketing Officer at National Public Radio, took the stage at MarTech in San Jose on April 4 and offered a lively exposition of NPR’s approach to content programming in an era where sound-oriented media are increasingly consumed through voice-enabled devices such as Alexa, Google Home and smartphones equipped with voice assistants like Android’s Google Assistant and Apple’s Siri.

“We’re in somewhat of an audio renaissance right now,” said Goldthwaite, noting that NPR has been the top producer of podcast content for the last three years running. She mentioned NPR’s long-standing reputation for using audio to tell compelling stories but explained that the role of such content providers in the lives of consumers has shifted radically in recent years, as content consumption has become a part of today’s on-demand culture.

In the previous era, all listening was “appointment listening,” and the family gathered around the radio at a set time to experience their favorite programming. “Now,” said Goldthwaite, “we control what we want to hear and when we want to hear it. You can watch or listen whenever you care to.”

This seemingly benign change has dramatic implications. After all, 21% of adults own smart speakers today, with 8% having received a smart speaker during the holidays in 2018. Ownership has grown by 78% just in the past year, and owners of smart speakers are highly active, with more than half using their devices once a day or multiple times per day.

Rapid growth in adoption has led to a rapidly maturing user base, many members of which have moved beyond simple voice commands like “Alexa, play NPR,” and into customized experiences such as personalized listening for each member of a household.

Voice assistants, Goldthwaite noted, combine the very old technology of audio communication with the very new technologies of voice recognition, machine learning and artificial intelligence. As such, they carry the potential to meet several basic human needs in a new way. Sound, she explained, is the fastest acting sense we have, as well as the sense with the most powerful link to our emotions. Sound also carries the power to change the way we think.

NPR works to create programming that fits varying needs and thus works well in an on-demand context. Goldthwaite’s central mission is to create a more informed public and to challenge people and invigorate them with new ideas, and her goal as a marketer is, simply stated, “to make people need NPR.”

“There once was a time when no one went to bed at night without listening to the news with Walter Cronkite,” she noted. She sees NPR programming filling a need as well in the minds of listeners, and points to the recent development of short interactive programs such as the Wait Wait Quiz. The capsule version of the popular NPR quiz show allows listeners to play the game at home and interact virtually with hosts Peter Sagal and Bill Kurtis. Such reimaginings of popular shows give fans the ability to experience a brand in a new context.

Indeed, NPR has worked in recent months to package much of its popular news and entertainment content in long, medium and shorter formats, the better to accommodate the busy schedules and selective listening preferences of today’s audiences.

Goldthwaite sees NPR and smart technology standing at a median between the past and an imagined future where Yoda-like smart assistants anticipate our needs and help us manage all of our daily activities. Ideally, such assistants will free us up to do more of what we like to do, by relieving us of our more burdensome responsibilities.

NPR’s role in this imagined future is to continue to tell compelling stories and create engaging content, while expanding the variety and versatility of news and other programming.

For a traditional media company, NPR’s transition to newer forms of media has been surprisingly smooth and unforced, perhaps because smart speakers themselves hearken back to the era of the family radio. What is new, of course, is that content is divorced from any set programming schedule, and can be increasingly delivered in the exact time, place and duration the user requires.

Goldthwaite mentioned NPR’s famous “driveway moments” concept, where listeners are so captivated by a story that, after arriving home, they keep the car running in the driveway so they can listen all the way to the end. Today, the commitment to tell engaging stories remains, but the on-demand nature of content delivery means that so-called “driveway moments” can take place anywhere and at any time.

Opinions expressed in this article are those of the guest author and not necessarily Marketing Land. Staff authors are listed here.

Winners and losers in US shift to digital health