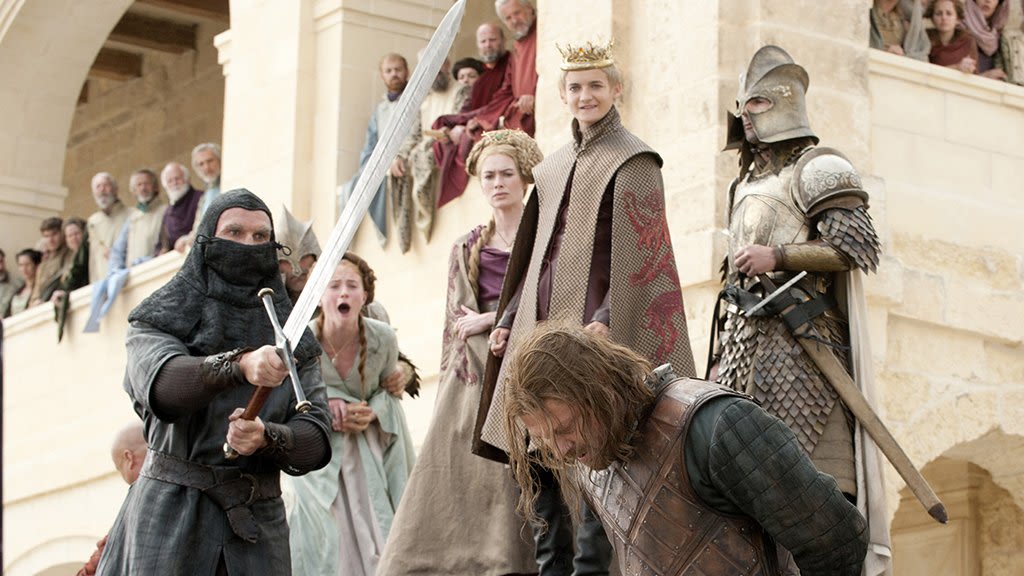 I think we can all remember exactly where we were when we saw Ned Stark beheaded.

It was shocking. It was unexpected. It was not how the story was supposed to go. But, that’s “Game of Thrones” for you.

HBO’s fantasy drama grabbed audiences from its very first episode in 2011 when it ended its premiere by tossing a 10-year-old boy out a window. The series has held its viewers for nearly a decade through its last episode, which is due this Sunday.

A lot has changed in the television industry since then — streaming services have come to rival and even dethrone cable services, consumers binge episodes instead of waiting for weekly installments and the number of shows available to watch has nearly doubled. But one thing has remained the same — fans still tune in en mass to watch “Game of Thrones.”

Each year “Game of Thrones” has seen its audience grow, a rarity for television shows that typically lose viewership over the course of their runs. The show has continued to smash viewership records since its debut. On April 28, the show set a new single-night record for the series, reaching 17.8 million viewers, beating the previous series high from its season eight premiere.

“I think TV has changed gigantically since ‘Game of Thrones’ came on the air and I don’t know if we will ever see another thing like it because of that,” Doug Creutz, analyst at Cowen, said.

The pendulum has swung in favor of binge-watching over the last decade, with more streaming services opting to release new episodes of hit shows all at once instead of parsing them out in weekly installments. “Game of Thrones,” however, strays from that trend, thriving on the buzz from social media chatter and speculation about plot points and fan favorite characters that comes in the time between episodes. Without building a community this way, it will be hard other shows to achieve this level of fervor.

The TV series, crafted by D.B. Weiss and David Benioff, comes from the mind of George R.R. Martin, the best-selling author of “A Song of Ice and Fire,” a series of novels set in the fictional land of Westeros.

“Harry Potter” and “Lord of the Rings” proved that the mainstream audience will pay to watch fantasy content, but “Game of Thrones” was still a risk for HBO. With excessive nudity, gore and incest there was no guarantee that it was going to be a massive success.

Not to mention, it was expensive. Episode budgets were in excess of $15 million each, which was uncommon in the industry previously. Not only that, but the producers had to reshoot a costly pilot, swapping out actors and scenes, to make the show more unambiguous for viewers.

The first time around Weiss and Benioff didn’t make it clear that Jaime and Cersei Lannister were twins, so their incestuous scene at the end of the premiere didn’t have the same punch at first.

The lofty episode budgets went towards manufacturing weaponry, setting up locations in a dozen countries, cast and crew salaries and dozens of special effects houses needed to bring some of the show’s more fantastical elements — like fire-breathing dragons — to life. Quality CGI up until this point was really only found on the big screen.

Large production budgets are now more common. Shows like Netflix’s “The Crown,” which costs about $13 million per episode, and veteran sitcoms like “Big Bang Theory,” where most core cast members, of which there are half a dozen, make between $750,000 and $1 million per episode.

Toby Holleran, senior analyst at Ampere Analysis, said “Game of Thrones” was likely a major reason Netflix invested around $100 million in the first two seasons of “House of Cars” back in 2013.

What “Game of Thrones” is, perhaps, most known for is its disregard for conventional storytelling. Martin’s novels subverted the typical hero’s journey trope in favor of more realistic plot outcomes.

Case in point: season one’s main hero Ned Stark loses his head when he decides to be noble and warn Queen Cersei that he has discovered her darkest secret — all of her children were born of incest. Two seasons later, his eldest son, the new “hero” of the show is murdered at a wedding before he can avenge his father.

“The storytelling was done in a way that was unpredictable in an era of cookie-cutter storytelling,” Csathy said.

Like “The Walking Dead,” the fact that no character was safe from death made each episode all the more thrilling and incited a desire in audiences to watch each episode when it came out so that they wouldn’t miss out.

Social media became a place for fans to commiserate about their favorite characters’ demises and to share theories about who might be next or who will make their way onto the Iron Throne by the series’ end.

For the first four seasons, fans of the books had the upper hand. They knew what was coming. Until season 5, that is, when Weiss and Benioff began to deviate from Martin’s source material because Martin hadn’t finished the final books in his series.

Fans of the books took pride in videotaping their friends and family members watching shocking plot twists like the Red Wedding and uploading those reactions to social media.

This fervor manifested into group watch parties, people gathering to view the episode together at home or at local bars. Watching “Game of Thrones” has become akin to watching a live sporting event.

The community of fans so devoted to “Game of Thrones” is a rarity these days, save for massive franchises like “Star Wars,” “Star Trek” and Marvel. Part of this is due to the fact that there is so much content out there for audiences to watch, that you can’t watch everything — you have to prioritize.

The more channels and shows that are out there for consumers to watch, the smaller audiences become per show, Creutz said.

Not to mention, some analysts see streaming services becoming hindered by one of the things that made them so popular in the first place — binge watching.

Kit Harington as Jon Snow featured in the “Game of Thrones” season 6, episode 9

While other platforms release all episodes of a show at once, HBO has continued to parse out its episodes of “Game of Thrones” on a weekly basis, driving up the anticipation and keeping fans talking for months rather than just weeks.

“I fundamentally believe that Netflix is making a mistake by putting [content] out there the way they do,” Creutz said.

He said that the streaming service could benefit from putting out episodes of its bigger shows like “Stranger Things” one at a time to capitalize on fan excitement and engagement.

Currently, fans of Netflix shows must watch all the new episodes of a show during its first weekend if they want to avoid spoilers come Monday morning at the office water cooler. The rushed experience was new and exciting in 2013 when Netflix debuted “House of Cards” and “Orange is the New Black,” but Creutz said fans like having time to digest the content and anticipate what comes next.

“I think people would respond positively,” he said.