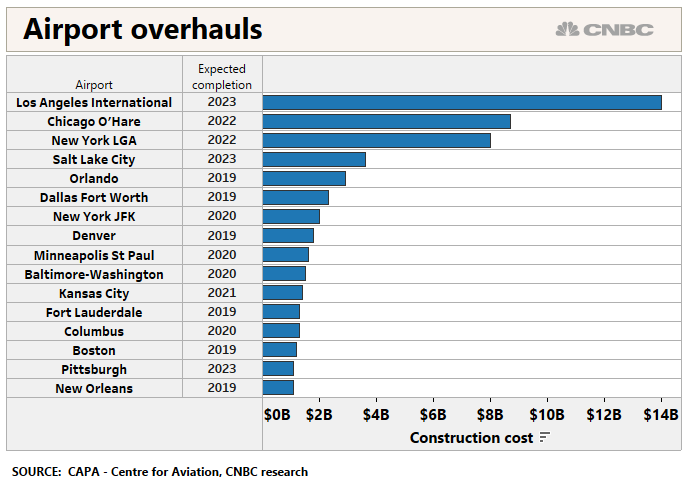 Fly into New Orleans and you immediately see the construction on the airport’s new north terminal. With 35 gates, 14 TSA lanes and plenty of room to handle the growing number of people flying in and out of the Big Easy.

“As this market continues to grow we are in better position to handle the growth in this market,” said Kevin Dolliole, the director of aviation in New Orleans.

When the $1.3 billion New Orleans terminal opens later this year, it will completely replace the existing Louis Armstrong New Orleans International Airport. It’s the latest upgrade and expansion of an airport in the U.S., a key part of America’s infrastructure sorely in need of major renovations.

“We are way, way, way behind,” former Transportation Secretary Ray LaHood said of the state of America’s airports compared to the other terminals around the world:

LaHood’s assessment is based on years of traveling around the globe both as a congressman and later as a member of former President Barack Obama’s cabinet. And he thinks Americans who fly around the world are tired of flying out of cramped, dated airports in the U.S. and landing in spacious, gleaming new ones overseas.

While the U.S. has not seen an new major airport open since Denver International in 1995, cities and states have been adding new terminals, runways and and the capacity to handle the record number of people flying today, more than 900 million last year according to the U.S. Department of Transportation.

Among the high profile airport renovations around the country:

For New Orleans, a big focus in designing the new terminal is making the facility more efficient for travelers and the airlines. For example the gates are spaced farther apart, allowing planes to pull in and out at the same time, something not possible with the current layout of the airport.

Meanwhile, designers are intent on giving the new terminal a feeling that is uniquely New Orleans.

“They will know immediately they are in New Orleans. The taste, the sound, the excitement of the city is captured in this facility through its architecture,” said Dolliole.

Sharon Agee, who was waiting in the New Orleans airport to fly home to Atlanta, said travelers like her want bigger and better airports.

“We need shopping, we need comfortable places to have our phones, places to take our kids when we have delayed flights,” she said.

TV networks pitch brand safety, streaming to advertisers at upfronts
How ‘Game of Thrones’ blazed a trail for TV over the last decade
To Top
error: Content is protected !!