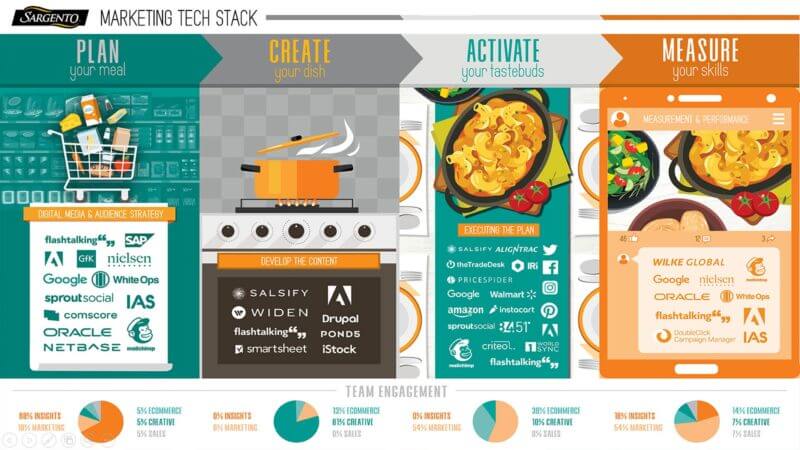 What’s the secret to putting together a useful visualization of your marketing technology stack? Well, in the case of 2019 Stackie winner and food company Sargento, it required more than a few chefs.

Schenck said the first step to building out Sargento’s winning slide involved isolating the different elements of their stack.

“The core data strategy team understood the connection points of the technologies and how they were being leveraged. Our digital creative had a high-level understanding of the goal, which led her to the first ‘Aha!’ moment — which was the brand metaphor.”

From there, the creative design took shape with the visual organization of the columns — “Plan your meal,” “Create your dish,” “Activate your tastebuds” and “Measure your skills” —  representing different layers of the stack.

Schenck said the group effort between the data and creative leads resulted in more team members seeing the company’s martech stack for what it is.

“This concept was critical in gaining understanding and alignment from the broader team because it placed the technology in a visually familiar setting, which was easy for them to understand and digest.”

The second ‘Aha!’ moment for the team? Sargento’s martech stack itself was more robust than Schenck’s marketing team first realized.

“We have found this to be a valuable tool,” said Schenck, “Within internal conversations, we had been referring to the marketing technology stack — which was a vague concept for the marketing team. We discovered the Stackie contest and it inspired us to develop our own illustration.”

The slide now serves as a reference point her team uses to talk about the company’s ongoing data strategy evolution.

“It was also integral in the discovery phase of our data strategy development,” said Schenck, “We hope to submit again next year. As we look to the future, we anticipate adding predictive analytics, visualization software and deeper personalization technologies.”

The 2019 Stackie Awards event that kicked off the 2019 MarTech conference raised $4,800 for Girls Who Code, a nonprofit organization supporting women in the field of computer science. In addition to Sargento, this year’s Stackie Award winners included Airstream, ESRI, Juniper Networks and Paychex.

A transparency tool for Facebook advertisers is what marketers want most