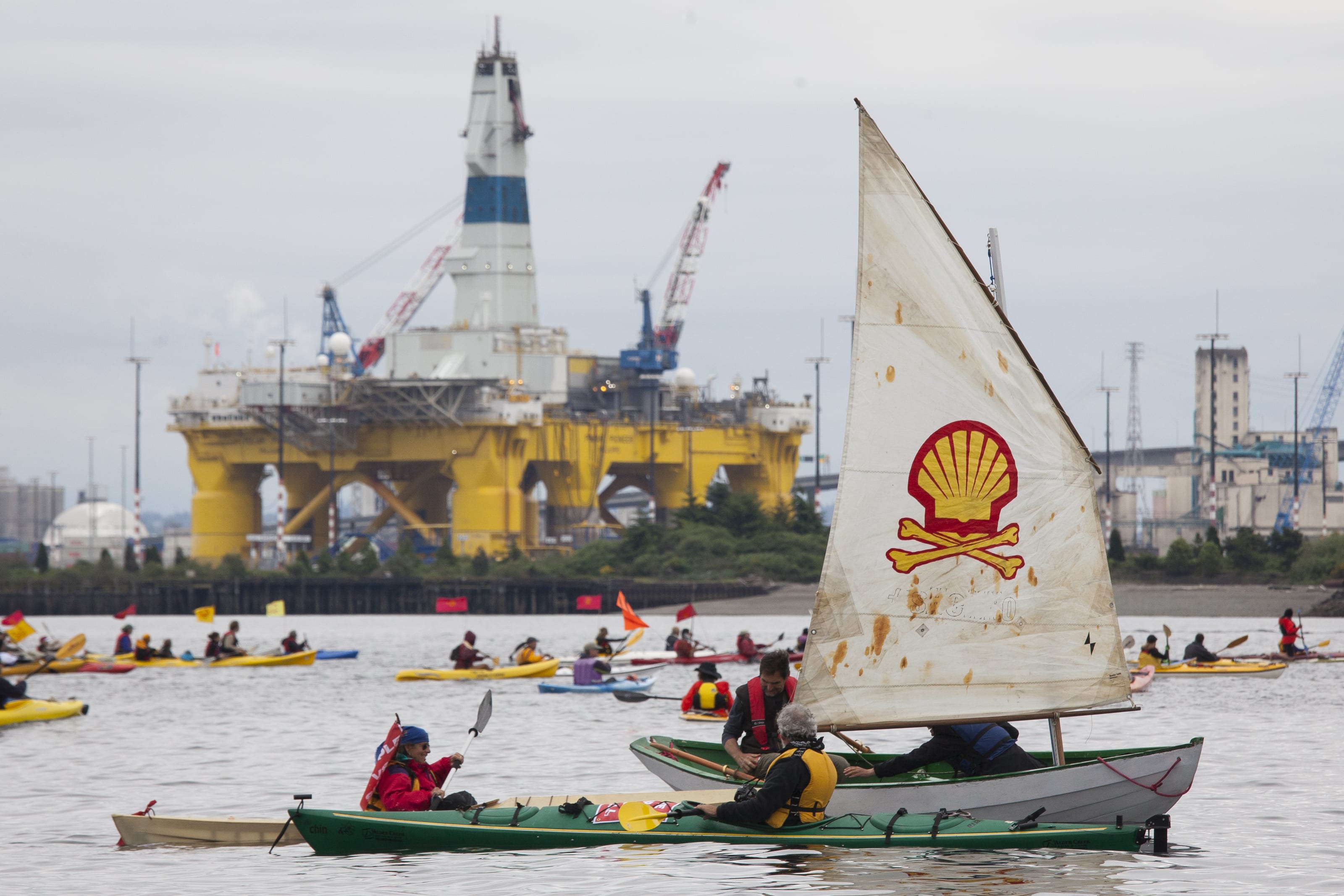 ShellNo flotilla participants float near the Polar Pioneer oil drilling rig during demonstrations against Royal Dutch Shell on May 16, 2015 in Seattle, Washington.David Ryder | Getty Images News | Getty ImagesIn a move that could hamper President Donald Trump’s push to expand offshore oil and gas development, the House of Representatives is expected to vote on three bills on Wednesday that will block offshore drilling in almost all waters surrounding the U.S.The legislation would ban drilling on both coasts of the U.S., in the Arctic National Wildlife Refuge and in the Eastern Gulf of Mexico. The House already voted to block offshore drilling in those areas for one year by including the amendments in the Department of the Interior budget.In 2017, Trump signed an executive order to start a five-year development plan for offshore drilling in the Gulf of Mexico and off the East Coast, an effort to reverse former President Barack Obama’s drilling ban on roughly 120 million acres of Arctic Ocean and 3.8 million acres in the Atlantic.A federal judge later ruled that Trump’s order to revoke the drilling ban was unlawful because it exceeded the president’s authority.Legislation at stakeOne bill at stake is the Arctic Cultural and Coastal Plain Protection Act, by Rep. Jared Huffman (D-Calif.), which would prevent the Trump administration from opening up the Arctic National Wildlife Refuge in Alaska to oil and gas drilling.The Arctic National Wildlife Refuge is the largest wildlife sanctuary in the U.S. It contains the country’s second biggest wilderness area, and is full of caribou, wolves, polar bears and hundreds of bird species.In 2017, a Republican-controlled Congress passed a provision in the Tax Cuts and Jobs Act to allow oil drilling in the Arctic sanctuary’s Coastal Plain, a strip of land that hosts more diversity of life than nearly anywhere else in the Arctic.The proposed legislation would repeal the section of the 2017 law allowing for drilling.”It’s interesting how this administration thinks that it owns everything, and that it can sell off our public or tribal lands to the highest bidder,” Huffman said at a press conference on Wednesday. “We’re trying to stop that.”The House will also vote on the Coastal and Marine Economies Protection Act, by Rep. Joe Cunningham (D-S.C.), which would place a moratorium on offshore drilling and block the Bureau of Ocean Energy Management from offering new areas for oil and gas leasing off the California, Oregon and Washington state coastline and the Atlantic Coast.Democratic presidential candidate Beto O’Rourke on Wednesday said Cunningham’s legislation was a “critical step forward in fighting climate change and preserving our environment.””Offshore drilling threatens the local wildlife and water of communities in South Carolina and across the country while also undermining economic opportunity,” O’Rourke said in a news release.The third bill, written by Francis Rooney (R-Florida), would ban oil and gas leasing in eastern areas of the Gulf of Mexico off the Florida coast. It would also make permanent a provision in a 2006 law that placed a moratorium on drilling there, which expires in 2022.Rooney said that oil drilling off the Gulf coast was an “existential threat to the tourist economy” in Florida. Other coastal lawmakers have raised concerns that drilling could negatively affect tourism and marine life in the area.”If you’re looking for bipartisan cooperation in Congress, these offshore drilling bills are a good example,” said Alexandra Adams, legislative director for the Nature program at the Natural Resources Defense Council.”Communities across the country oppose handing our publicly-owned coastal waters over to polluters for private profit. They’re not willing to put local economies—and their way of life—at risk for dangerous and dirty oil and gas drilling.”Bills unlikely to get farLawmakers that oppose the legislation argue that banning offshore drilling would harm the country’s energy production, place the U.S. behind global competitors and put national security at risk.”The idea here is that we’re going to carry out policies that stop energy production in the United States for the purpose of protecting the environment, sounds like a laudable goal,” said Louisiana Rep. Garret Graves on Tuesday.However, Graves said the legislation would allow competitors to have a greater influence on energy production than the U.S. “This is a gift for Vladimir Putin,” he added.A group of organizations opposing the legislation said that it would undercut “domestic energy security and economic opportunity by limiting American energy access.””Our country cannot afford to block access to new energy supplies and risk losing our energy advantage,” they wrote in a letter to Congress.The legislation would likely face an uphill battle in the Senate. The Trump administration has also threatened to veto the three bills.”Prohibiting energy development in new federal areas would hinder future administrations’ efforts to make up for revenue lost as production declines from leases in aging energy fields,” the White House said Monday in a statement of administrative policy.”Such restrictions will tie the hands of future administrations and reduce their ability to enhance energy security through strong domestic energy production and to ensure affordable energy for American families.”

Why the July 4 earthquake didn’t trigger a ShakeAlert