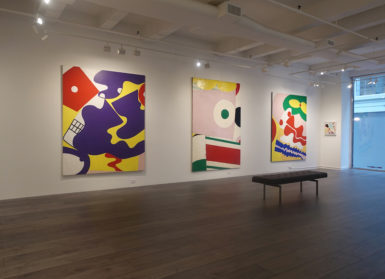 Knox Martin has joined Hollis Taggart in New York. The artist, whose work is the subject of the ongoing exhibition “Knox Martin: Radical Structures” at the gallery’s West 26th Street space, is now exclusively represented by the enterprise.

Martin, who is 96, has drawn from movements like Cubism, Abstract Expressionism, and Pop to create his own distinct visual language. His vibrant paintings and works on paper feature interplays of geometric, figural, and abstract forms, and he has said of his process, “I never know where [the paintings] are going, they tell me what to do.”

For his recent works, the artist has opted for a restrained color palette. In U (2019), a black and white painting on view at Hollis Taggart, Martin depicts the letter, in various sizes and positions, across the canvas.

Martin had his first solo show in 1954 at Charles Egan Gallery in New York, and since then his pieces have figured in presentations at the Santa Barbara Museum of Art in California, the Jewish Museum and the Whitney Museum in New York, the Lowe Art Museum in Miami, and elsewhere. Martin has taught at the Yale Graduate School of the Arts, New York University, the University of Minnesota, and the Art Students League of New York.