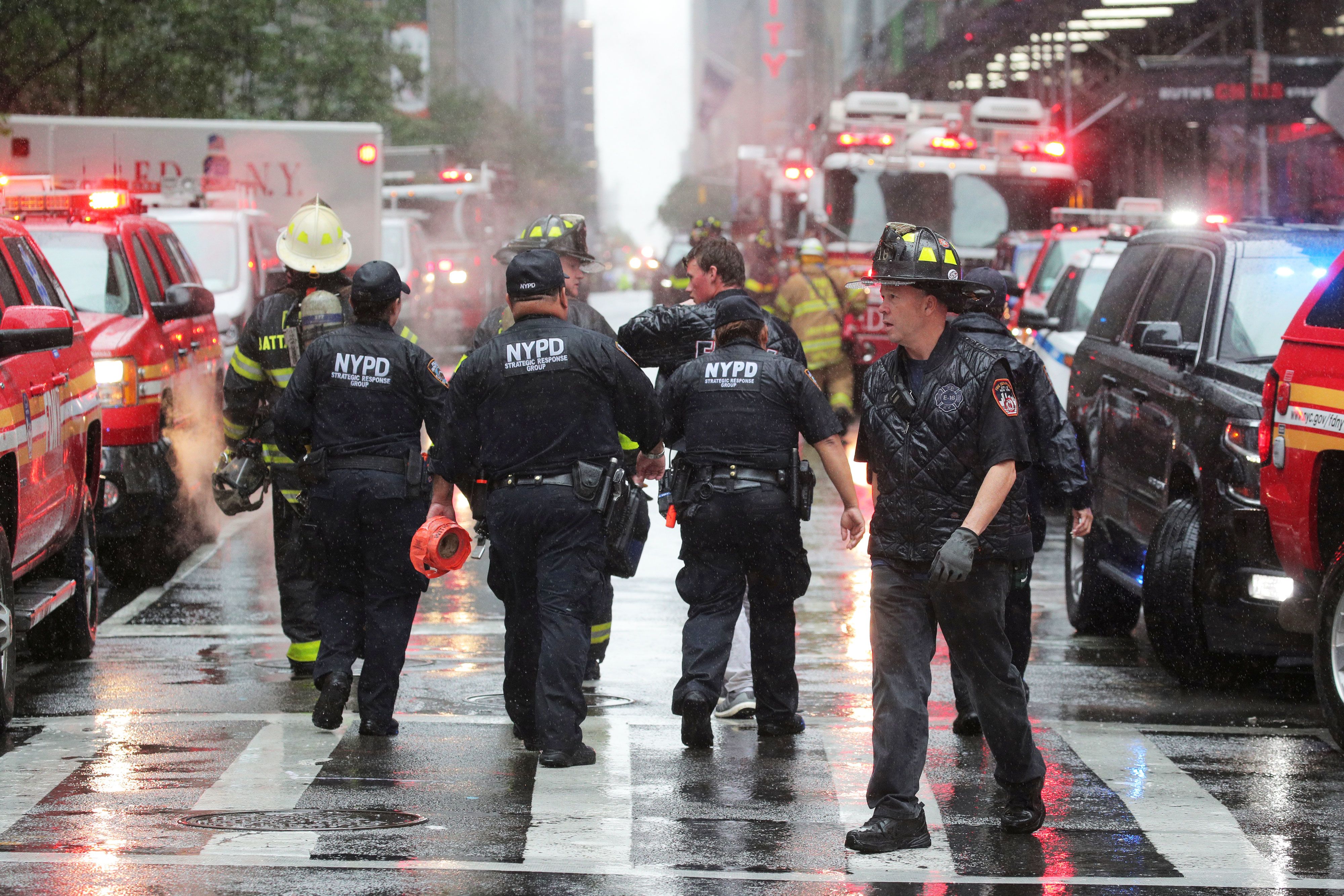 A helicopter crash-landed Monday afternoon onto the roof of a building in midtown Manhattan and caught fire, authorities said.

One person died in the crash of the Agusta A109E helicopter, according to officials.

That victim is presumed to be the pilot, according to New York City Mayor Bill de Blasio, who also said there were no other known injuries.

“Thank God for that,” de Blasio said. “This could have been a much worse incident.”

Only the pilot was aboard the aircraft when it crashed just before 1:43 p.m. on top of 787 Seventh Ave., a 51-story building located between West 51st and West 52nd streets, at the north end of Times Square.

A senior law enforcement official told NBC News that the pilot had dropped a passenger off at the West 34th Street helipad when he then took off and eventually flew onto the roof of the building.

The building’s roof does not have a helipad.

Workers at the building quickly evacuated after the crash, which occurred on a rainy, foggy day. The fire on the roof was soon extinguished by firefighters, who took elevators to the roof and had water pumped up more than 700 feet.

“We do not know the cause of this incident,” de Blasio told reporters.

But he also said there is “no ongoing threat to New York City … based on all the information we have right now.”

“No indication that there was any terror nexus here,” de Blasio said.

Tenants of the building, known as the AXA Equitable Center, include BNP Paribas, Citibank and the international law firm Willkie Farr & Gallagher.

BNP Paribas CEO Jean-Yves Fillion told CNBC that the 2,000 bank employees working in the building were all evacuated safely. The firm occupies multiple floors up to the 33rd floor.

Fillion said he knew something had happened when the helicopter hit the building. “We definitely felt it,” he said. He added that the company is operating normally, though he isn’t sure when employees will be allowed back into the building.

Fire trucks and police vehicles swarmed the area on the heels of the crash. While some debris from the incident fell from the roof, none of it hit anyone on the ground, authorities said.

Three sources who spoke with NBC News said that before the chopper crashed, its pilot reported having mechanical failure or engine trouble.

The aircraft had taken off from the helipad at West 34th Street on the Hudson River and planned to go in the direction of the Statue of Liberty, which is several miles south of there, according to sources.

The crash occurred a mile or so north of where the helicopter took off.

New York Police Commissioner James O’Neill said the area around the crash scene is subject to a temporary flight restriction order because of its proximity to Trump Tower, the New York residence of President Donald Trump.

That restriction means that an aircraft would need permission from the flight tower at La Guardia Airport in Queens, New York, to enter the area.

“There was a helicopter that made a forced landing or an emergency landing … on the roof of the building for one reason or the other,” Cuomo said. “People in the building said they felt the building shake.”

“It was hard landing,” Cuomo said. “In the building itself, nobody has been hurt.”

New York City firefighters suit up at the scene after a helicopter crashed atop a building and caused a fire in the Manhattan borough of New York, New York, U.S., June 10, 2019.

Laura Esquival, a hostess at Ruth’s Chris Steak House, which is located across the street from the crash scene, said, “I saw people running out.”

“They were escorting everyone out,” she said.

Passersby quickly posted still images and videos of the scene.

The building, which is considered a landmark in the area, was designed by Edward Larabee Barnes for the Equitable Life Insurance Co.

Its skylighted entrance atrium features a large mural by the artist Roy Lichtenstein called “Mural with Blue Brushstroke,” which he completed in 1986.

CalPERS, the California public employee pension fund, purchased the building in 2016 for $1.9 billion.

New York Governor Andrew Cuomo arrives at the scene after a helicopter crashed atop a building in Times Square and caused a fire in the Manhattan borough of New York, New York, U.S., June 10, 2019.

The Federal Aviation Administration, in a prepared statement said, “FAA air traffic controllers did not handle the flight.”

The FAA also said that the National Transportation Safety Board “will be in charge of the investigation and will determine probable cause of the accident.”

White House spokesman Hogan Gidley said, “The President has been briefed on the helicopter crash in Manhattan and continues to monitor the situation.”

In March 2018, seven members of Congress from New York and New Jersey, noting that they had “for many years … advocated for restricting helicopter tourism over New York City and Hudson County,” wrote the FAA and the NTSB asking those agencies to address “a number of issues” with chopper flights.

The letter cited an accident earlier that month when five people aboard a sightseeing helicopter were killed after the aircraft crashed into the East River off the coast of Manhattan.

“Helicopter crashes not only threaten the lives of the passengers, but also endanger all our constituents,” the letter said. “Every time a helicopter crashes, it puts at risk the innocent bystanders living, working, and traveling in the heavily populated region below.”

New York Yankees pitcher Cory Lidle and his flight instructor were killed in 2006 when Lidle’s small plane crashed into a 42-story building on the Upper East Side of Manhattan. Eighteen people were injured in the crash.

In 1977, five people were killed when the rotor blade of a helicopter snapped off on the roof of what was then known as the Pan Am Building in midtown Manhattan, next to Grand Central Terminal. The building, which is now known as the MetLife Building, had its heliport closed after the accident.

Since then, public helipads in Manhattan, of which there are now three, have been confined to the coasts of the island.

Correction: Seven members of Congress from New York and New Jersey wrote the FAA and the NTSB in March 2018. An earlier version misstated the year.

Amazon comes to New York with another one of its cashier-free stores
Provention Bio shares more than triple on diabetes prevention study
To Top
error: Content is protected !!