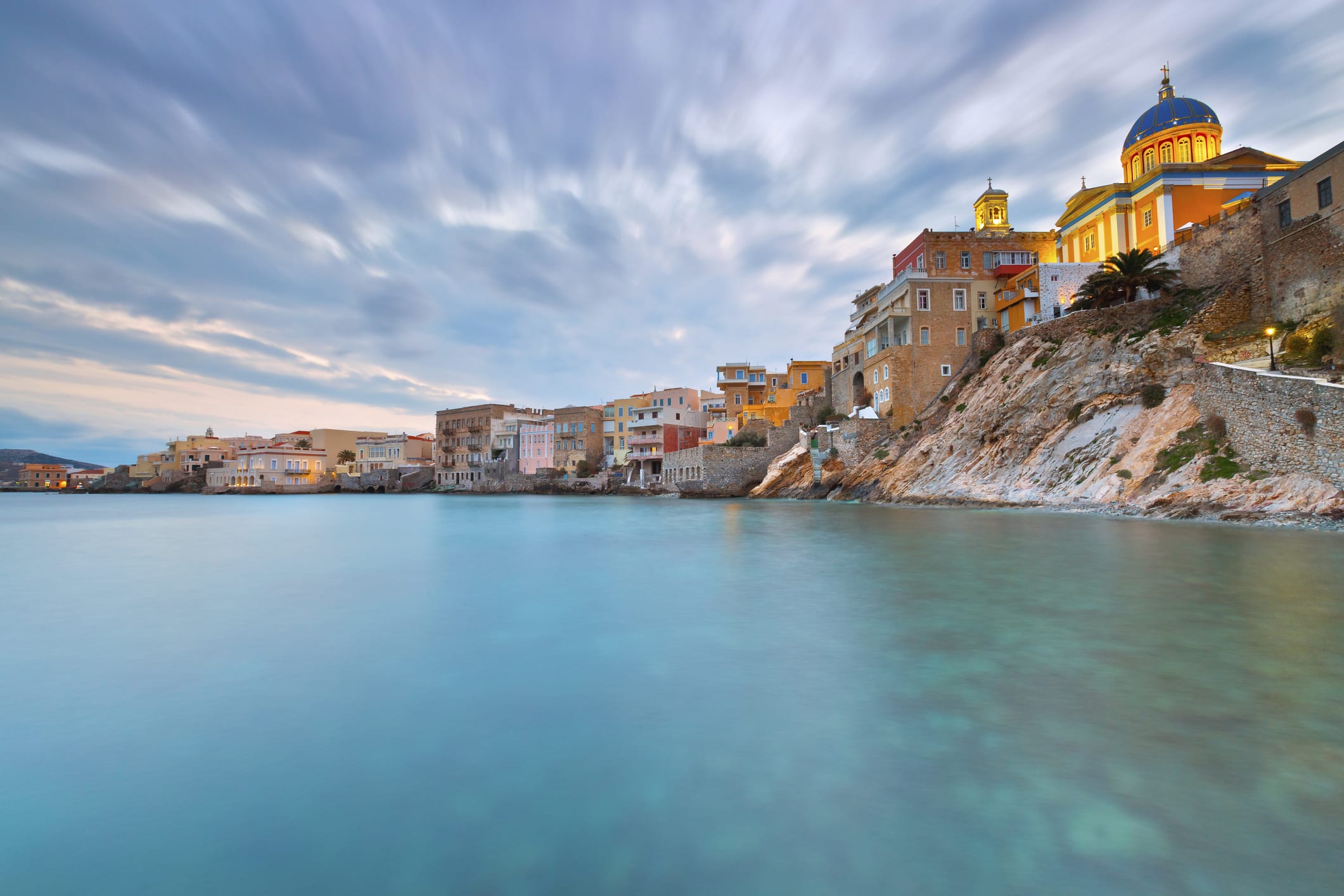 If you’re dreaming of going abroad this summer, countries in the European Union are gradually reopening their borders to residents of select countries around the world.From July 10, people from England, for example, will be able to go to popular destinations such as France, Spain and Italy without having to quarantine on arrival or upon returning.Transmission of the coronavirus is still a concern for many visitors, so one way to avoid crowds is to head to some of Europe’s smaller destinations. Here are five picks.Important tip: Check individual countries’ updates before booking, since travel regulations can quickly change.  Instead of Santorini, try SyrosSantorini’s famous blue-topped, whitewashed buildings that spill down the island’s hillsides towards the sea have made it a magnet for travelers for decades. For a quieter (and less expensive) slice of Greek life, the island of Syros has a mixture of beautiful beaches and small towns to visit.A narrow alley of Ano Syros, a town on the island of Syros in Greece.Charalambos Andronos”It’s completely different (from Santorini). It looks like Italy … because of the colors of the island,” Zina Bencheikh, a managing director at travel company Intrepid Group told CNBC by phone.Indeed, the hillside town of Ano Syros, just above the capital of Ermoupolis, was built by the Venetians in the 13th century and mixes narrow streets with courtyards. Ermoupolis itself boasts pastel-colored buildings, marble squares and a bandstand, which hosts performances.Beach-wise, Finikas and Galissas are good, sandy options, but if you’re desperate for some glamour, high-end Mykonos is only a half-hour ferry ride away.Instead of Cornwall, try SuffolkCornwall, in the southwest of England, is a British favorite for its cobbled villages and surf beaches; Newquay holds an annual Boardmasters festival, with the next edition set for August 2021.But the lesser-visited Suffolk, in the east of the country, also has rolling countryside and pretty towns — and it’s possible to surf the waves at better-known beaches like Lowestoft and Walberswick.Travelers can stay in yurts for a glamping holiday in Suffolk, U.K.Mike HarringtonThe region could be a less-crowded option this summer, said Bencheikh.”When we run our customer surveys, people think of going to Cornwall or (other) famous English (places) such as the Peak District … but not necessarily Suffolk,” she told CNBC by phone.Intrepid has added Suffolk as a destination to give people an alternative to the more famous English spots, where guests can stay in a yurt on a sustainable farm, visit a local vineyard and take a nature hike at night.Brightly-colored beach huts in Southwold, a small seaside town in Suffolk, U.K.George W JohnsonSouthwold is one of the most picturesque of the county’s seaside towns, with its row of colorful beach huts, Victorian pier and Adnams Brewery, which has been in operation since 1872. Adnams also runs The Swan Hotel in Southwold, which serves formal dining as well as afternoon tea, and reopened on July 4 at a reduced capacity. Reservations are required.Instead of Lisbon, try PortoLast month, Portugal’s Foreign Minister Augusto Santos Silva told the Observador newspaper that “tourists are welcome in Portugal,” and people flying there won’t have to quarantine, though travelers should check their home countries’ rules for when they return.Porto is a more laid-back alternative to Lisbon, though both share winding cobbled streets, buildings covered with colorful azulejo tiles and a coastal location. The river Douro runs through Porto — separating it from sister city Vila Nova de Gaia — where the country’s famous port wine can be tried at a variety of café terraces.The Arrabida Bridge at dusk in Porto, Portugal.JooCalvetFor a different view of the city, visitors can climb the Arrabida Bridge, towering high over the river Douro, with views across the old city and toward the ocean. Climbers have to pre-book and should check opening hours, which have been restricted during the pandemic.And for a day out, take a visit to the Douro Valley, where port is produced. It’s about 60 miles from the city, a quick trip by car, but day visitors can also take a slow, leisurely river cruise down the Douro river to absorb the valley’s beautiful landscapes.Instead of Paris, explore the area around BordeauxGeoffrey Kent, founder and co-chair of luxury travel agency Abercrombie and Kent, recommends Bordeaux as an alternative to the French capital.”Its position further south means that the weather is better, and there is also a lot on its doorstep, from wine tasting to surfers’ paradise Biarritz,” he told CNBC by email.Kent highlights Bordeaux’s Saint Andrew’s Cathedral as a must-see, where visitors can get panoramic views from its bell tower (check restrictions before visiting).The medieval town of St. Emilion in southwestern France.Kloeg008About an hour’s drive from Bordeaux is the fortified medieval town of St. Emilion, which is surrounded by more than 900 wine producers. The town itself is worth a visit for its underground church, more than 1,000 years old, while the Chateau La Dominique is a Jean Nouvel-designed winery and restaurant a short drive away.Head south about 120 miles and you’ll find Biarritz, right on the Atlantic coast, which Kent recommends for its blend of French chic with the kind of laid-back attitude found in Australia’s Byron Bay.Instead of Tuscany, try Brda, SloveniaTuscany is popular and rightly so — it is home to Florence, Siena and the Chianti wine region. But for the road less traveled, the Brda region is a quiet respite in Slovenia between the Mediterranean and the Alps.”Known as the ‘Tuscany of Slovenia,’ this relatively unknown part of the world has spectacular views … and offers some incredible medieval architecture,” Kent told CNBC.Kozana, a village in the municipality of Brda, is located next to the Italian border.prematVisitors can stay on local farmsteads and enjoy home-cooked food, house wine and spectacular hiking. There are also 170 miles of cycling routes that take in wine country as well as small villages.For a taste of the city, Slovenia’s capital Ljubljana is about 75 miles away, with its 900-year-old castle, baroque cathedral and Zmajski Most (Dragon Bridge) — and the center is car-free.