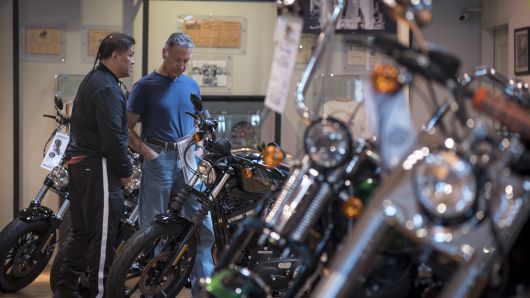 Harley-Davidson’s first-quarter profit fell 26.7% as the motorcycle company struggled with falling demand as well as higher costs from U.S. tariffs on raw materials and European taxes on imports of its motorcycles.

Here’s how the company did compared with what Wall Street expected:

Excluding the impact of tariffs and restructuring costs, the company said Tuesday its net income fell to $127.9 million, or 80 cents per share, in the first quarter ended March 31 from $174.76 million, or $1.03 per share, a year earlier.

Revenue from motorcycles and related products fell 12.3 percent to $1.19 billion.

Its shares jumped by about 2 percent on the better-than-expected earnings.

The motorcycle maker has struggled with a drop in sales in the U.S. amid fears that younger buyers are less interested in motorcycles than previous generations. Last quarter, the company’s shares tanked after it released earnings that missed analysts’ expectations.

President Donald Trump said in a tweet that the company has struggled with tariffs from the EU and has had to move jobs overseas as a result. “So unfair to U.S. We will Reciprocate!” he tweeted Tuesday.

The company has been trying to get more people excited about riding motorcycles again. In November, it started to preview its LiveWire electric motorcycle in the U.S. and Europe in an attempt to attract more riders overall, including younger ones.

Harley-Davidson also unveiled a ten-year plan in 2017 to attract 2 million new riders by 2027. In addition to investing in electric bikes, it’s set up schools across the country to teach people how to ride.