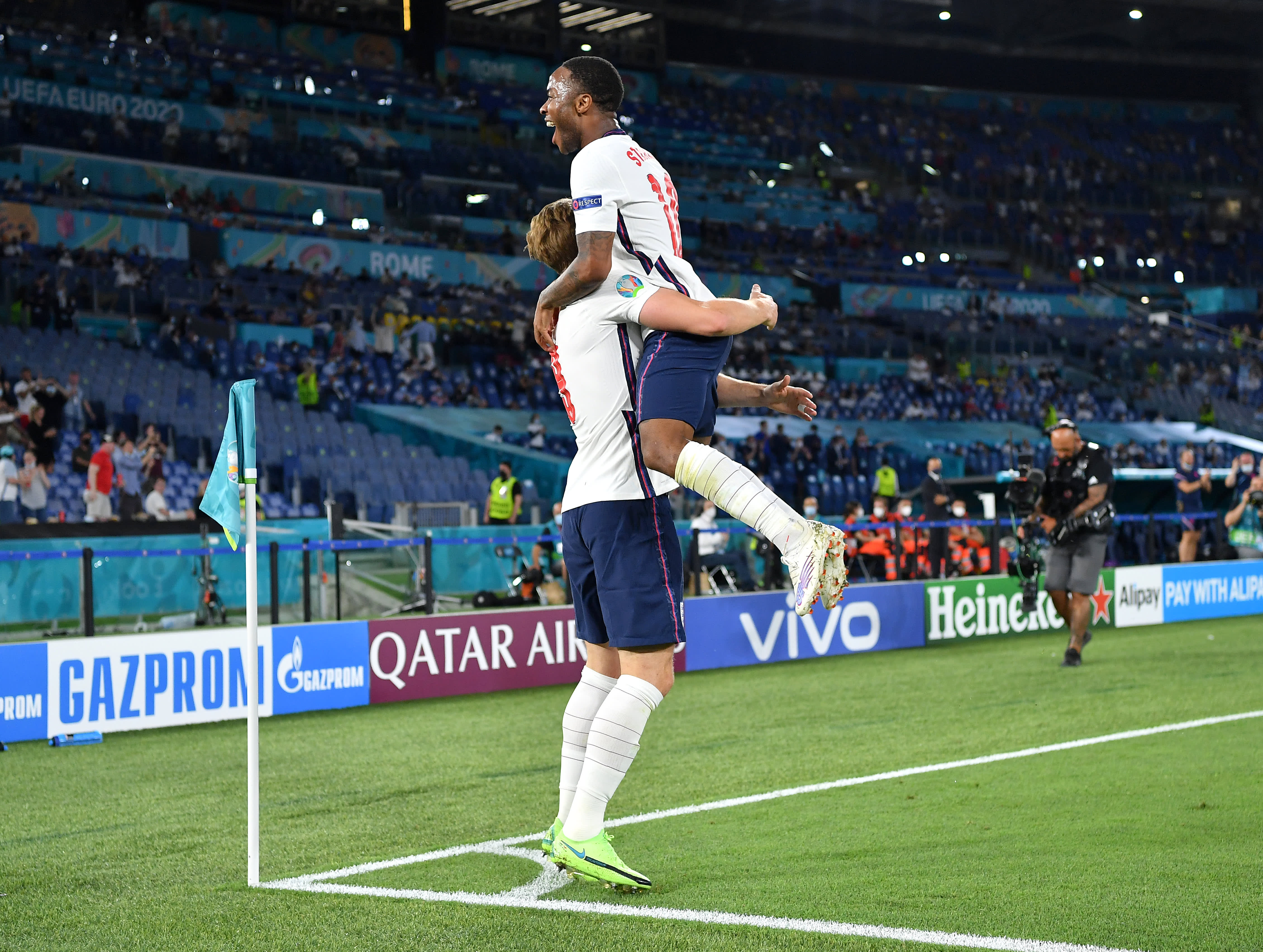 ROME, ITALY – JULY 03: Harry Kane of England celebrates with Raheem Sterling after scoring their side’s third goal during the UEFA Euro 2020 Championship Quarter-final match between Ukraine and England at Olimpico Stadium on July 03, 2021 in Rome, Italy.Ettore Ferrari – Pool/Getty ImagesGoldman Sachs’ Euro 2020 probability model now predicts that England will win its first major international soccer tournament since 1966, as the Three Lions prepare to take on Denmark in the semi-final at Wembley on Wednesday.Gareth Southgate’s side comfortably dismantled Ukraine on Saturday to set up England’s first European Championship semi-final for 25 years, while opponent Denmark saw off the Czech Republic 2-1.Italy beat the top-ranked team in the world, Belgium, to advance to the other semi-final against Spain, who narrowly overcame Switzerland in a penalty shootout.Following the last of the quarter-final fixtures, Goldman’s Christian Schnittker published a note Sunday entitled “It’s (Probably) Coming Home” — a nod to The Lightning Seeds’ “Three Lions” song often sung ironically by long-suffering England fans.”Italy’s 2—1 win against Belgium was a shock to our model, which so far had seen Belgium as the most likely team to take home the trophy,” Schnittker said.”With Spain winning against Switzerland (1—1, 3—1 (P)), the first semi-final on Tuesday will see Spain face Italy, where our model predicts a narrow Spanish victory. With Belgium out of the competition now, our model sees England as the favourite to win the Euros after their 4—0 win against Ukraine.”According to Goldman’s probability model, England now has a 57.7% chance of reaching the final and a 31.9% chance of winning the tournament. Spain is at 54.6% and 24.6%, respectively, while Italy’s chances sit at 45% to reach the final and 22.4% to win.Denmark retains their underdog status, at 42.3% to reach the final and 21.1% to win.The model expects England to beat Denmark 2-1, which would mean England goalkeeper Jordan Pickford finally conceding his first goal of the tournament, while Spain are projected to beat Italy 2-1 in extra-time.The model draws on data from around 6,000 matches played since 1980, taking into account a range of factors, including squad strength, recent form, match location and major tournament performances.However, the Wall Street giant acknowledged when first deploying the model in May that all predictions remain “highly uncertain” — such is the nature of the beautiful game.European soccer’s governing body UEFA postponed the Euro 2020 tournament to June 2021 as a result of the coronavirus pandemic.