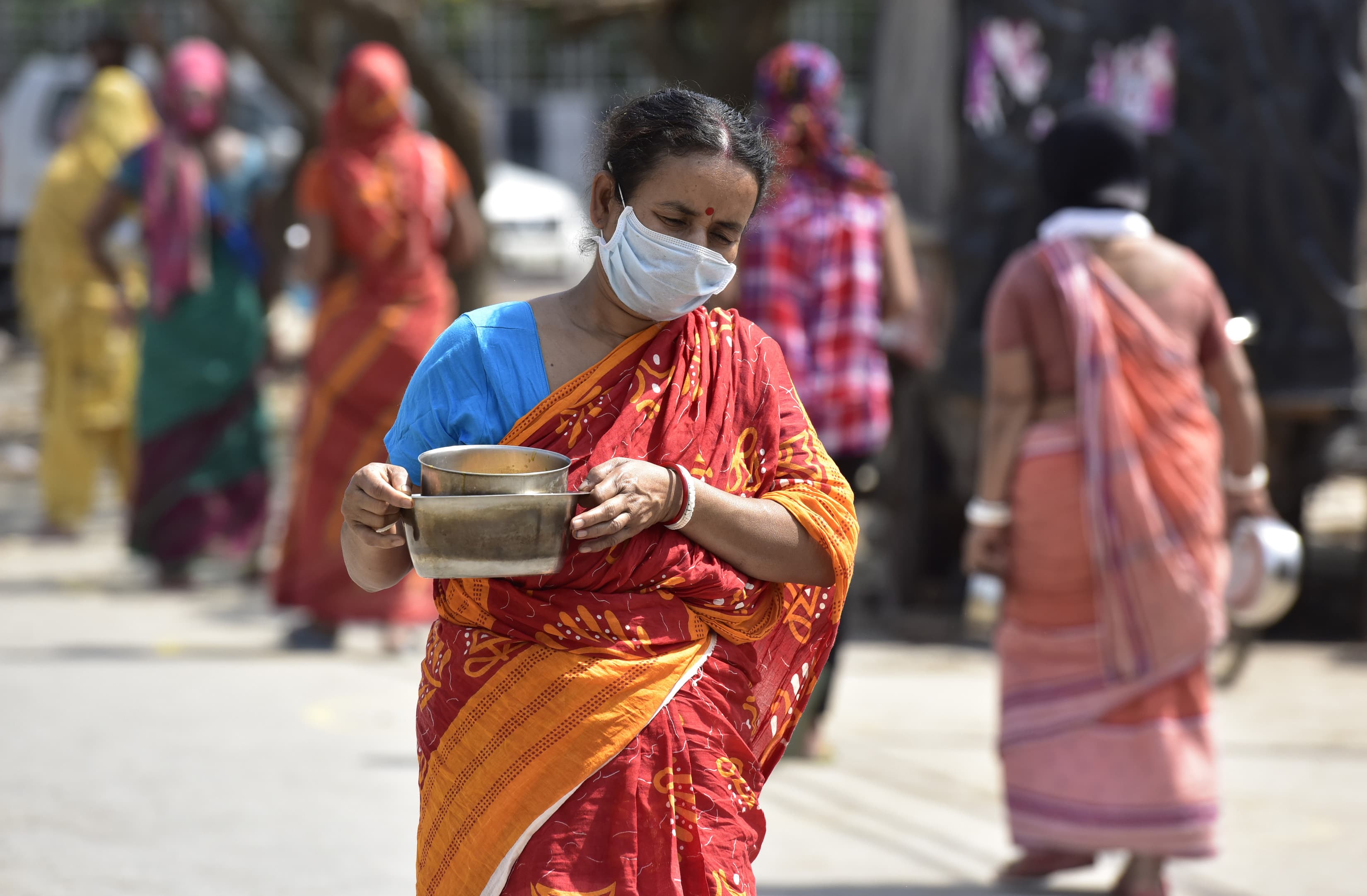 NOIDA, INDIA – APRIL 11: A woman holds a pot at a food distribution by Noida Authority at Morna Village in Sector 35, on day eighteen of the 21 day lockdown to limit the coronavirus, on April 11, 2020 in Noida, India. (Photo by Virendra Singh Gosain/Hindustan Times via Getty Images)Hindustan Times | Hindustan Times | Getty ImagesA second wave of Covid-19 infections is expected to slow India’s economic recovery in the three months between April to June, according to Goldman Sachs.The investment bank on Tuesday lowered India’s growth forecast for the quarter from 33.4% year-on-year previously, to 31.3%. It cited lower consumption and services activity likely due to increased social restrictions that are being put in place by India’s state and federal governments to tackle the new outbreak.Goldman said it expects gross domestic product (GDP) to contract sequentially by 12.2% quarter-on-quarter on an annualized basis for the three months ending June — which marks the first quarter of India’s fiscal year that began on April 1 and ends on March 31, 2022. Last year, India slipped into a technical recession after registering two consecutive quarters of contraction.”With virus cases surging to a new high of over 100K/day over the weekend, and a host of states including Maharashtra announcing stricter lockdown restrictions which are likely to broaden out in coming weeks, we expect Q2 GDP growth to be slower than we had initially anticipated,” Goldman analysts wrote.Record high casesCases in India have been climbing since mid-February, with the state of Maharashtra — home to India’s financial capital, Mumbai — getting hit particularly hard. On Monday, India reported more than 103,000 new cases over a 24-hour period, which surpassed levels seen in September when the first wave of infection reached its peak.On Tuesday, the South Asian nation reported 96,982 new cases, with a bulk of them in eight states including Maharashtra, Chhattisgarh and Karnataka.Authorities in Maharashtra stepped up restrictions, including introducing night curfews when only essential services will remain open, as worries mount over a potential shortage in hospital beds and doctors. Other states are also preemptively increasing restrictions to slow the virus’ spread.On the other hand, India has also stepped up its vaccination efforts. As of Tuesday, government data say the country has administered more than 84 million doses since rolling out its mass inoculation program in January.Some analysts and investors have said that the impact of the recent surge in cases will likely be limited if India can avoid a strict national lockdown like the one last year.Sharp rebound in subsequent quartersGoldman expects activity to rebound sharply from subsequent quarters — July-September and beyond — as India’s containment policy normalizes and the vaccination pace speeds up. Still, the hit from the April-June quarter is likely to affect India’s overall growth projection for the fiscal year, which Goldman now expects at 11.7%, down from an earlier forecast of 12.3%.That said, the investment bank cautioned that uncertainties around its estimates remain high, and the actual impact could be larger or smaller, depending on how stringent India’s containment policies turn out to be, and if they spill over into sectors like construction and manufacturing.Impact on GDP can potentially be cushioned by more targeted, localized restrictions in hot spots as opposed to a broad-based national lockdown, like the one India undertook last year, which had a significant socio-economic impact, according to Goldman.”Measures have also been more targeted, and skewed towards services sectors such as leisure, recreation and transport, with little or no impact for agriculture, manufacturing, construction, and utilities,” the analysts said, adding that the bank’s analysis suggested that people have become more used to a post-Covid environment, with a shift towards e-commerce and working from home. As such, their response to containment policies by states is likely to be less sensitive.Goldman also expects the Reserve Bank of India to keep its policy rate on hold at 4% as well as maintain its accommodative stance and an environment with abundant liquidity for longer than expected.

MLB confirms All-Star Game moving to Denver after pulling out of Atlanta over voting law
Tiger Woods was speeding as fast as 87 mph before car crash, cops say
To Top
error: Content is protected !!