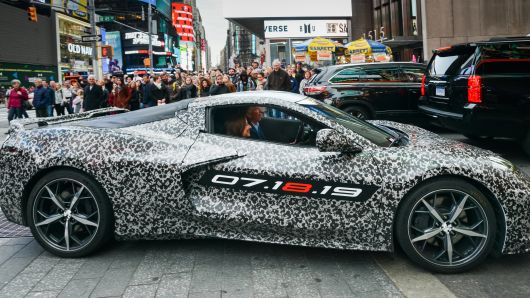 While the Corvette may not generate the sort of sales you’d expect of a Chevy SUV like the new Blazer, it has long been billed as “America’s sports car,” giving a halo not just to GM but the American auto industry, as a whole. The latest version, known to fans as the C7 – for the Corvette seventh-generation model – is an impressive and well-respected piece of machinery, but not quite a world-beater. The C8, it is widely expected, will be the first version to give a serious challenge to the likes of Ferrari, McLaren and Lamborghini.

Corvettes, up until now, have put their engines upfront, pretty much like anything else that you’d find in your typical showroom. With rare exception, all of those European brands traditionally mount their engines amidship, or even in the rear, layouts that translate into markedly better vehicle dynamics. With its big V-8, the Corvette is plenty quick. It just can’t keep up with the likes of a Ferrari sweeping through the corners.

It’s not that GM hasn’t thought about building a true world-beater. Coming up with a mid-engine model was the one unfulfilled dream of Zora Arkus-Duntov, the Belgian-born engineer widely known as “the father of the Corvette.” Since the first ‘Vette was produced 66 years ago, in fact, there have been any number of prototypes, none making it into production.

The Corvette itself nearly went away during the automaker’s economic collapse a decade ago. The current model, the C7, was officially put on hold as GM went through bankruptcy, though a secret “skunkworks” team kept plugging away until the automaker could loosen up the purse strings again. The current model has widely been hailed as the best Corvette ever — but ever so slightly short of being that true Ferrari challenger.

Netflix is falling on concerns of competition from Disney+
Southwest removes 737 Max from flight schedule through early August
To Top
error: Content is protected !!