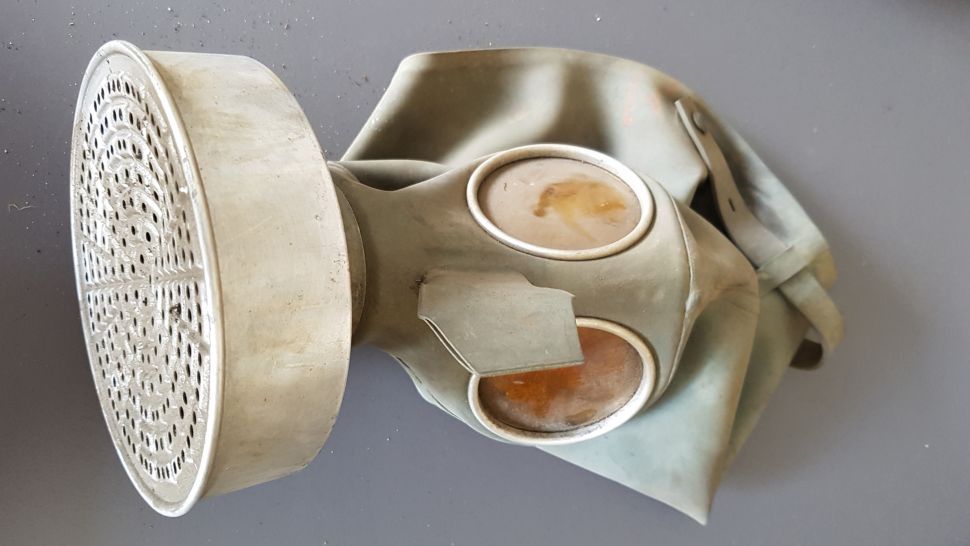 A history teacher in Germany has discovered a rare cache of Nazi artifacts, including a painted portrait of Adolf Hitler and medals decorated with eagles and swastikas, hidden for more than 75 years behind a wall in the city of Hagen, in the western part of the country.
The teacher, Sebastian Yurtseven, was helping clean his aunt’s Hagen home last month, following heavy rainfall and flooding that has left much of the region in need of aid. Yurtseven told German news outlet Westfalenpost that he found the artifacts after removing a piece of damaged plasterboard from the wall, uncovering the portrait, a newspaper from 1945, a revolver, gas masks, brass knuckles, and stacks of documents, among several other objects.

Andreas Korthals, an archivist at Stadtarchiv Hagen, the city’s archives, told Live Science that the artifacts “were probably disposed of in this crevice in April 1945, when American troops marched in.” Researchers from the city archives took 12 boxes of material from the site to be sorted and indexed.
In the weeks since, the researchers have uncovered that Yurtseven’s aunt’s home once served as the headquarters of the Nationalsozialistische Volkswohlfahrt, or NSV, according to Korthals. The NSV was a national welfare organization run by the Nazis. At the height of Nazi power the organization had around 17 million members. Their purpose was to supplant organizations such as the Red Cross and local charities and spread the Nazi ideology through social work.
Ralf Blank, head of Stadtarchiv Hagen, told Westfalenpost this was “an incredible discovery” that will help historians understand the operations of Nazi agencies at the local level. The Hagen cache included, for example, documents recording personal information about area residents, such as the number of pregnant women in the region. Researchers have also learned that the local head of the NSV was employed by a German federal agency after the war and died in the mid-1990s.
“I got goosebumps,” Yurtseven told Westfalenpost. “I didn’t think it would turn into such a huge discovery.”