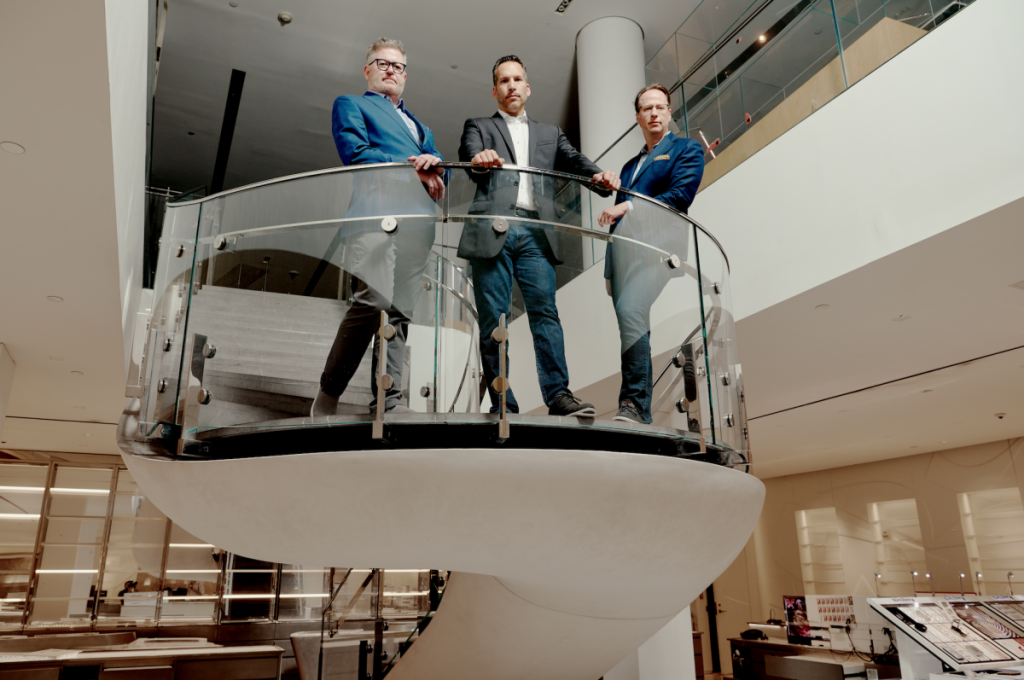 Art House, a new hybrid art exhibition space that aims to bring a flexible solution to gallery space, is set to open in New York this November. The new venture will be located in the former Barneys flagship store on Madison Avenue. Designed by wHY architecture’s creative director Kulapat Yantrasast, Art House will offer an exhibition space in New York city for galleries based in other cities and countries around the world.
The venture, a twist on the art fair model, is founded by the team behind TEFAF New York— Michael Plummer and Jeff Rabin of New York advisory firm Artvest and Geoff Fox, the principal of consulting firm Touchstone Event Management. It follows the launch of a similar space in London.

On November 4, Art House says it will host 60 exhibitors in the five-floor venue with showcases organized around a common theme. A line up of vendors has not yet been announced. Barney’s closed the doors to its New York store in February after filing for bankruptcy last year and liquidating its leftover merchandise during the holiday season.
In addition to exhibition spaces, the hub will have offices and salon-style viewing rooms, which will allow dealers to host year-round programming in an “à la carte” fashion, said Rabin. The founders plan to host another multi-gallery event in May 2022.  The schedules mimic the pre-pandemic Fall and Spring seasons of Tefaf New York and the marquee auctions between November and May. The venue looks to encompass all corners of the art market, from small to mega dealers, to top auction houses like Sotheby’s and Christie’s—while targeting buyers across all art categories from antiquities to the ultra-contemporary.
“Dealers need a new toolkit to reach clients,” Rabin said in an interview referring to the needs of dealers, which were only exacerbated by the spread of the pandemic last year. “The online activity was not sufficient to make up for lost art fair and in-person activity at galleries.”
The 18-month pandemic (and counting) has left major art fairs across the globe in crisis. The biggest brands like Art Basel and Frieze are unable to reconvene for large-scale events, while restrictions on international travel continue to limit the circulation of dealers and collectors. Some fairs, like TEFAF Maastricht, were forced to cancel their live editions scheduled for the Fall after multiple postponements. Fairs that have managed to open have contracted in size. Frieze New York’s most recent edition in July at The Shed only hosted around 60 exhibitors.

“The community is now more interested in highly curated, more selective fair or exhibition venues,” said Plummer. “The 200-plus dealer events, even before Covid, were getting to be overwhelming.”
Several years before the pandemic hit, Plummer and Rabin were already seeing significant shifts in the art fair sector. In 2016, Artvest partnered with TEFAF, a European fair known as a venue for Old masters and antiquities, to New York. The new fair was meant to address a decline in U.S. and Europe participation at TEFAF. The aging collector base for Old Masters and antiquities had reduced attendance in the Dutch city. “That was an indication of a trend that was happening globally,” said Rabin. Then as now, Rabin said, galleries are looking for alternatives to art fairs and are increasingly inclined to bring their wares directly to collector-heavy local hubs.

The cofounders say the space will provide much of what an art fair does, public programming and a luxury spaces to entertain top clients supported by an online platform. The site will include a members club housed in the former Barneys restaurant, Fred’s. The space is meant to mimic the upscale atmosphere of an art fair VIP lounge. Art House will also host pop-up showcases that adhere to collectors’ travel patterns.
The business model for the space is simple. Art House will charge galleries a leasing fee to exhibit and rent office space. Pricing will be in line with what major art fairs charge vendors to showcase their works. (Plummer and Rabin declined to specify the fee range.) The founders say that London’s newly minted Cromwell Place— a membership-based gallery hub in South Kensington where dealers and collectors run their operations that opened in August 2020— is a close comparable to Art House.
The challenge for galleries in maintaining brick-and-mortar operations during lockdown are not easing. According to the latest edition of the UBS Art Basel Global Art Market report released in March, the gallery sector saw a 20 percent drop in sales to an estimated $29.3 billion from 2020 to 2021. A survey across 81 U.S. galleries released by the Art Dealers Association of America (ADAA) this month revealed the pandemic’s mass impact on temporary workers and contractors employed by galleries that left many jobless. “Some dealers need to have a global footprint that isn’t so real estate heavy,” said Plummer. “In the art business where income flows are very lumpy, it fits the dealer business model.”
One of the predictions from the UBS Art Basel art market mid-year report issued in September was that there could be a growing divide in the markets’s top and low ends, where top collectors might gain disproportionate access to art and exhibition events. The online art fair platforms promised to deliver a more democratized marketplace for small galleries; but it doesn’t equate to a level playing field among buyers of varying financial means.
Taking cues from the report’s author, art economist Clare McAndrew, Plummer and Rabin took the trend into consideration when conceiving Art House. Younger gallerists and specialist niche dealers are vital players in the market, the two emphasized. That demographic, said Plummer, tends to get lost in an art fair economy that is heavily focused on vendors of blue-chip 20th-21st century art. “The model caters to a broader range of the market,” said Rabin. “Its really meant as a rejuvenation of the city’s art footprint.”