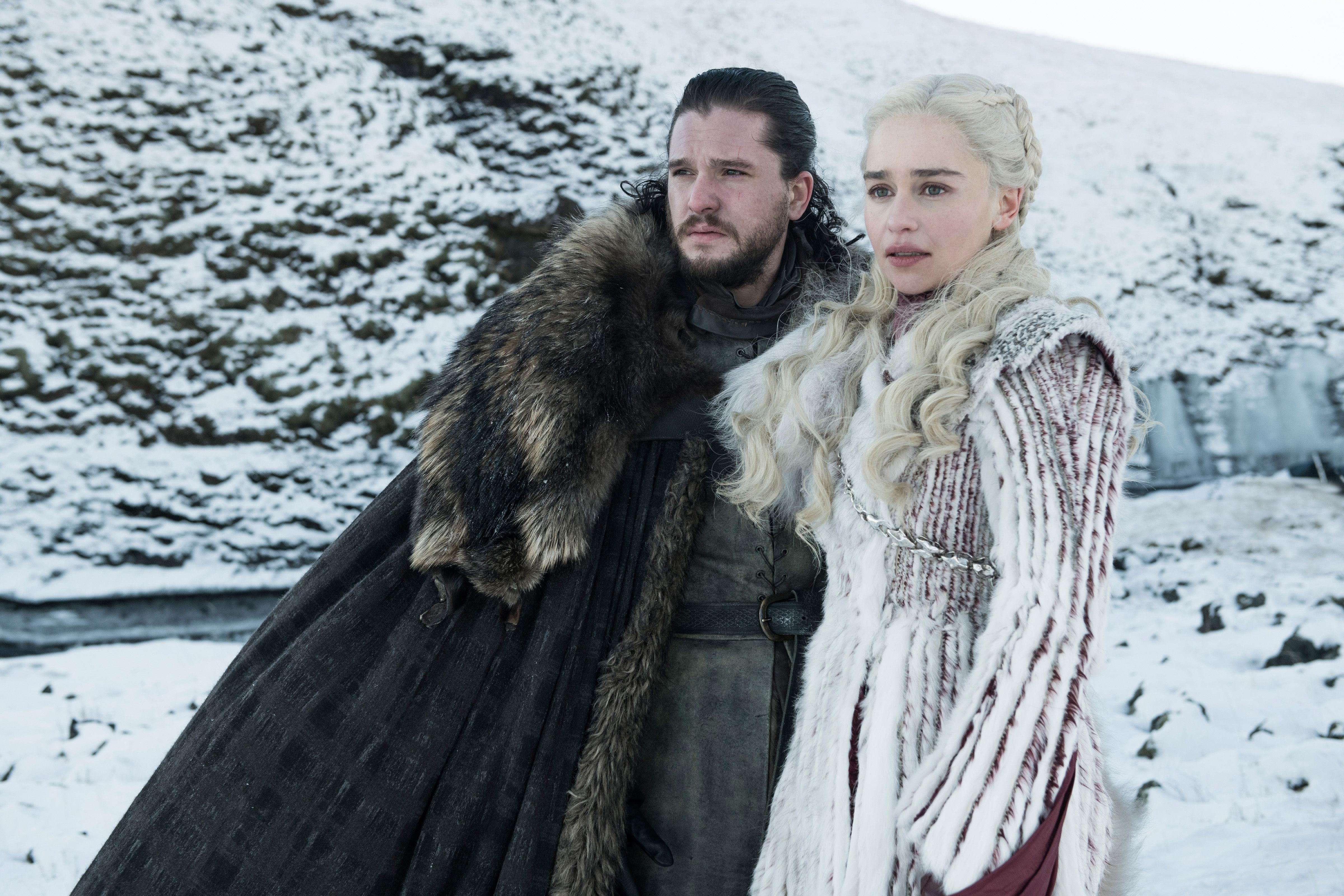 Actors Kit Harington and Emilia Clarke on the set of the eighth season of Game of Thrones.

Despite high criticism from fans, the final episode of “Game of Thrones” shattered single-night viewing records Sunday, with 19.3 million tuning in to watch the finale.

The final season of HBO’s television adaptation of George R. R. Martin’s “A Song of Ice and Fire” was widely criticized by fans who felt the pacing and its treatment of previous character developments were not up to par.

Still, the show continued to have record-breaking viewership. Each episode, save for one, toppled viewer counts from the season seven finale, which was the series high prior to season eight’s release.

Each year “Game of Thrones” has seen its audience grow, a rarity for television shows. Typically, a series will lose viewership over the course of a run. The eighth season drove high viewership because it was the show’s last. More than a decade of storytelling was coming to an end, and everyone wanted to know what happened.

While some fans of the long-running fantasy drama felt satisfied by the show’s final bow, others were quick to express their displeasure with how events unfolded. One of the chief complaints surrounding the eighth and final season was its pacing and its treatment of previous character developments.

While the first six seasons all contained 10 episodes, season seven was comprised of only seven installments and season eight had only six. The truncated nature of the final season seemed to have played a major factor in fan dissatisfaction. Plot lines that may have been developed further given more time fell flat for many long-time viewers of the show.

*Warning: Spoilers for the “Game of Thrones” finale to follow.*

“It’s clear the writers knew the story they wanted to tell, in retrospect,” Myles McNutt, of AV Club, wrote in a review of Sunday’s finale. “They were telling the story of the girl who grew up believing that her family had been wronged, and that it was her responsibility to right that wrong.”

“[Daenerys] struggles in Westeros felt arbitrary, driven by dumb military strategy more than anything else,” he added. “The thematic value of her struggle was always there, but in execution the show was moving at such a different pace than before that it had none of the pathos that had grounded her story to that point.”

It was always a coin toss for Daenerys to either become like her father the Mad King or shun that anger in favor of a more moderate, tempered justice. Throughout the show, Dany has used her power and her dragons to burn cities to the ground in the name of liberation. Only, in those instances, the men were slavers and tyrants and fans were able to put aside the high death toll because Dany’s motives were “good.”

In the eighth season, when she decimates King’s Landing with dragon fire, it’s not entirely out of character. It is only now that the people she is killing are considered more innocent than her past conquests that fans and characters within the series begin to balk at her actions.

“The finale wrapped a few elements up a tad too cleanly, perhaps going against the show’s original ‘good people don’t triumph’ edicts, but were you truly going to be happy with a defiant Dany standing over the charred bodies of everyone else, ruling a ruined realm?” James White, of Empire Magazine, asked in his review of the finale. “It’s not the end everyone would have wanted. It was never going to be.”

It didn’t help that starting in season five, Weiss and Benioff began to deviate from Martin’s source material because Martin hadn’t finished the final books in his series. So, fans that once knew how certain events would unfold were suddenly cast in shadow for the last few years, left wondering if what was on screen was really part of Martin’s vision.

One of the finale plot points that stuck with most people was that Bran Stark, aka Bran the Broken, became king of the six kingdoms, with his sister Sansa taking lead of the seventh kingdom, the North.

Many bemoaned that Bran had done little during the series to warrant this seat of power. He’d been relegated to being in the background for most of the last few seasons and, aside from his abilities as the Three-Eyed Raven to recall events of the past and see the future, has no real qualifications for leadership.

In fact, most of Bran’s scenes in the eighth season revolved around him disassociating from his family and every other character he encountered.

“Had Weiss and Benioff brought the show to a more satisfying conclusion, Martin would have had little incentive to finish the series,” Nancy Kaffer, of the Detroit Free Press, wrote. “It’s safe to say that fans are not satisfied, and Martin has a chance to tell the story he intended. So … how ’bout it, George?”

DOJ reportedly has antitrust concerns around Sprint-T-Mobile merger
US airlines set to carry a record number of passengers this summer
To Top
error: Content is protected !!