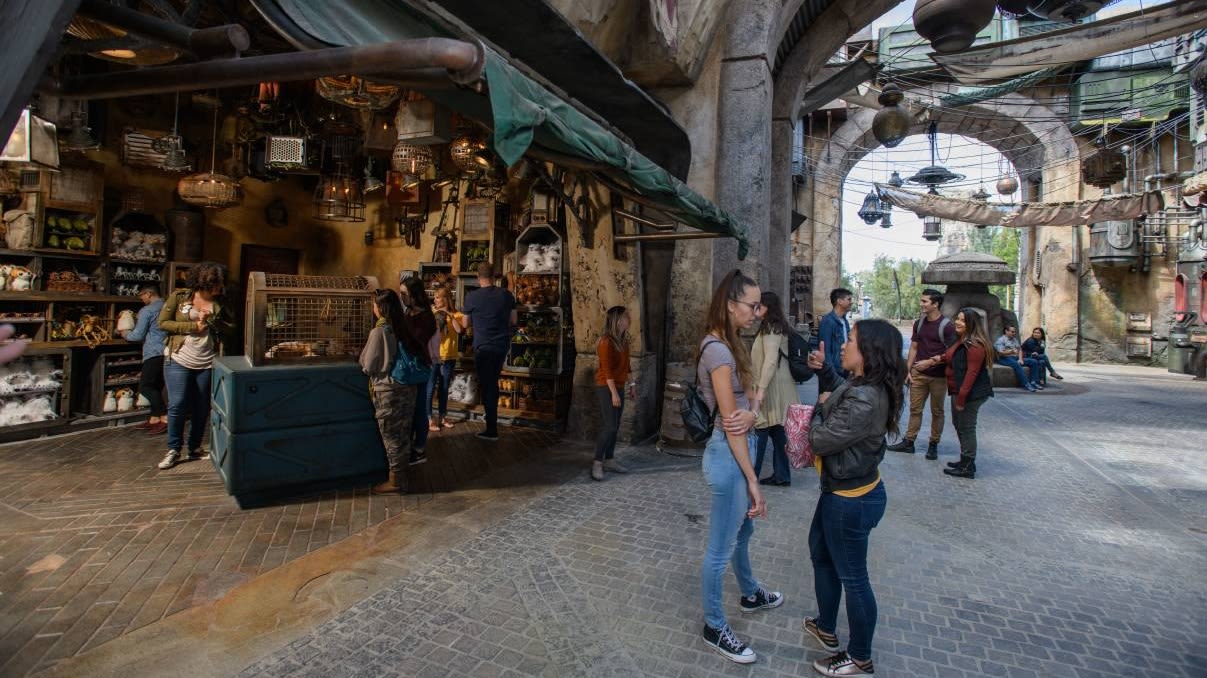 The shelves at Disney’s new theme park land Star Wars: Galaxy’s Edge in California aren’t bare, but there are a few items you won’t be able to get your hands on right away.

The Black Spire Outpost on the planet Batuu is a mecca for Star Wars fans. Here fans can immerse themselves in the Star Wars universe by building their own lightsabers and droids, sipping on some blue milk and aligning themselves with the Resistance or the First Order.

Part of the appeal of this immersive new land is the merchandise that parkgoers can take home. These items are exclusive to the shops in the park and, therefore, are highly sought after. However, toys, trinkets and collectibles are selling out fast and may not be in stock for a while.

Fans have been vocal on Twitter about what has been out of stock in different areas of the park.

Kyber crystals, the power source for custom lightsabers, that are sold in canisters have completely sold out. Currently, individual blue and red crystals are still available when parkgoers purchase a Sith or Jedi holocrons, information storage devices that react to the different colored kyber crystals by lighting up and producing distinct sounds and pieces of character dialogue from the franchise.

Kyber crystals are also still available for the custom lightsaber building experience at Savi’s Workshop. Now that the park is open to the public without reservations, visitors must book a time to get into Savi’s and pay a deposit of $199.99, the full cost of the experience, which is forfeited if customers don’t show up for their time slot.

While Savi’s experience is not being interrupted by sold out inventory, the Droid Depot experience is. According to fans and a Disney cast member, who works in the park and asked not to be identified, one of the R2 unit heads (black and clear) is currently not available and neither are the droid personality chips. The droid building experience starts at $99.99 and no reservation is needed to participate.

Other unavailable items include legacy lightsabers, screen accurate replicas of lightsabers seen in the Star Wars films and TV shows. According to the park employee, the Luke Skywalker, Obi-Wan Kenobi, Rey, Mace Windu and Darth Vader sabers are currently out of stock. Several Twitter users said the Ahsoka Tano sabers were also sold out, however CNBC was unable to confirm this.

“In character, I like to blame Hondo Ohnaka for being late on his shipments,” the Disney employee said. Hondo is a character from the animated Star Wars series “Clone Wars” and “Rebels.” He is a space pirate and smuggler that has a large presence in Galaxy’s Edge.

Loth-cats, plush toy creatures, Sabacc cards, a card game featured in the franchise, and Han Solo’s lucky dice are also among items not available at the park currently.

While Disney declined to comment on when certain inventory would be available in the Black Spire market, a company spokeswoman told CNBC, “There are a handful of items we are working diligently to restock.”

Some fans may be disappointed that certain items aren’t available, but there are still plenty of goods to pick up while visiting Batuu. In preparing to open Galaxy’s Edge, Disney created nearly 2,000 items from lightsabers and Jedi robes to plush toys and jewelry.

“The merchandise has been extremely popular and we do have a huge assortment of items available in Star Wars: Galaxy’s Edge,” the spokeswoman said.

Pilfered menus and sporks on Ebay

For those desperate to get their hands on some of the sold out merchandise, eBay might be their best bet. The online auction site has hundreds of listings for items from Galaxy’s Edge — including some items that were never meant to leave the park.

Kowakian Lizard-Monkey toys, Oga’s Cantina Rancor Beer Flight Board and Blue Milk cups can all be bought if you are willing to shell out a few hundred dollars.

Then there are the contraband items. Galaxy’s Edge has had to adapt to the number of thefts that have occurred in the park since its opening. Fans have been pilfering menus and metal sporks from the cantina either to keep for themselves or to resell online. Disney has had to dole out plastic forks to replace the sporks at the restaurant.

Additionally, ride cards from Millennium Falcon: Smuggler’s Run have also been found on secondary market sites. These cards are handed out to riders to explain the rules of the ride and guide them to their posts in the ship. Riders are supposed to hand these over to staff, but many have pocketed them to take home.

Representatives were not immediately available to answer follow-up questions about this matter.

Are Beyond Meat’s burgers healthier than red meat? Dietitians say no.
Nursing mothers use Facebook to sell and donate milk
To Top
error: Content is protected !!