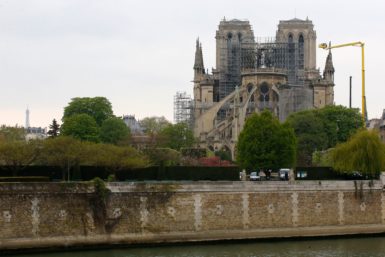 With collectors having pledged large sums to reconstruction efforts for the Notre-Dame Cathedral in Paris, Gagosian Gallery is joining in the efforts as well.

In June, Gagosian will stage an exhibition at its gallery in the French capital after which all proceeds from sales will go to initiatives to rebuild the cathedral after the blaze that broke out Monday. Full details for the show have not been announced, but the focus will be modern and contemporary art, according to a release.

“Notre-Dame is one of the most widely recognized symbols of the city of Paris and the French nation,” Larry Gagosian, the gallery’s founder, said in a statement. “I wish to contribute to the reconstruction of this iconic cathedral after watching, with devastation, as it was engulfed in flames.”