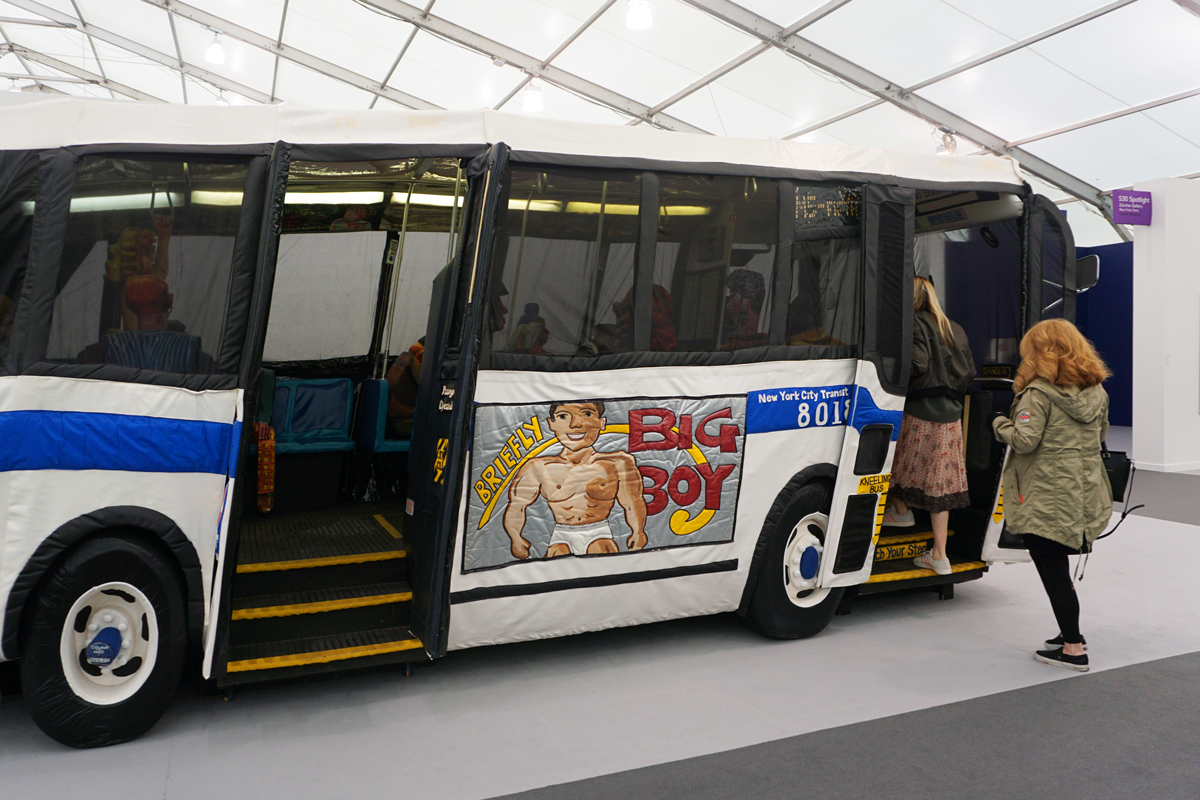 A soft sculpture of a New York City MTA bus by Red Grooms, presented by Marlborough, of New York and London, in the Spotlight section, at Frieze New York 2019.

Anyone who took a break during Frieze New York today and sat down on one of the fair’s many slate-grey benches likely felt a pleasant breeze at their feet. And if they looked below, they would have seen a hole beneath the bench, through which an air-conditioning system was pumping cool air, keeping the temperature in the tent right at a comfortable 65 degrees.

This is significant, because last year on VIP preview day, the fair’s A/C went on the fritz. It happened to be a particularly hot and sunny day, and the air under the tent was stifling. This time around, Frieze New York director Loring Randolph told ARTnews, the fair was being extra careful. They hired an engineering firm, and tested the new system at the inaugural edition of Frieze Los Angeles in February. Then again, today New York didn’t come with challenging weather. It was an overcast 55 degrees, with attendees in outerwear and in some cases toting umbrellas; there was a 30 percent chance of rain. Not a bad time to be under a tent. One dealer joked, “The story this year is, Frieze got in good with the weather gods.”

This is the eighth edition of this fair, an outpost of the Frieze Art Fair, which started in London in 2003. Like many high-profile fairs, the New York edition, which runs through Sunday, became an anchor event, and was joined in 2017 by a satellite, a branch of Maastricht’s TEFAF fair, in the Park Avenue Armory on the Upper East Side of Manhattan, where dealers show artworks from through the ages. This year a number of Frieze’s longtime exhibitors—Matthew Marks, Pace, Almine Rech, Skarstedt, and Sprüth Magers—are showing over there and sitting out Frieze. 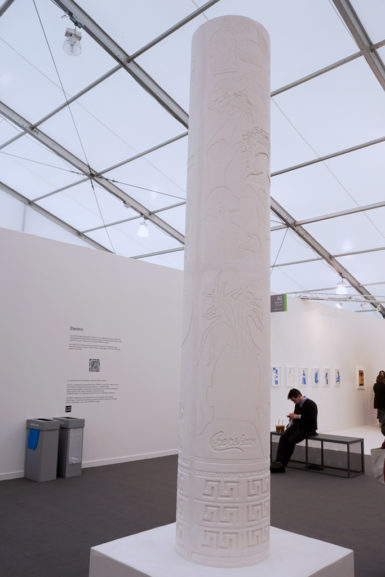 Marian Goodman had participated at Frieze New York since its inaugural year, along with 17 of the other 32 galleries who were in the 2018 edition but not on hand now—a list that includes Anton Kern Gallery, Esther Schipper, and Gavin Brown’s Enterprise.

[View a tour of dozens of booths at the fair.]

Another longtime exhibitor skipping this year is L.A.-based gallery Blum & Poe. Tim Blum told ARTnews, “We are looking holistically at our approach to programming globally, including all art fairs, and are making clear distinctions about what we’re showing where and when. Frieze New York just did not fit into those plans this year.”

Randolph acknowledged that in today’s art market, galleries are making their decisions year by year. “The conversations that I’m having with galleries now has been that they are deciding amongst all fairs which ones to do differently in different years. I don’t think it’s something specific to Frieze New York. It’s a broader conversation.” She added that in a Venice year—the Venice Biennale opens next week—many galleries’ scheduling is difficult, especially when they have artists in the Biennale. (Though he declined to comment on his not participating in Frieze New York this year, its worth noting that Gavin Brown has several artists in the Biennale.)

Galleries choosing to do TEFAF over Frieze NY in certain years also doesn’t seem to faze Randolph. Galleries can only show very specific things in that context, she said. “Things tend to be of a certain price point and a certain scale, because the booths are a lot smaller and a lot more expensive.” And that rules out younger galleries, and some kinds of contemporary artworks.

The absence of Goodman and Brown this year, though, has contributed to a drop in the kind of high-profile, crowd-drawing projects they historically brought to the fair. Brown did a sausage cookout with the actor Mark Ruffalo (to draw attention to the environmental effects of fracking) at the first edition, and offered a captivating Arthur Jafa booth last year. Goodman has done venturesome presentations of Danh Vo and Tino Sehgal, and last year offered a classic Pierre Huyghe smoke and light piece that was the talk of the event.

This year there are some more modest spectacles, though, like a New York City bus that Red Grooms made out of squishy material in 1995, with sculptural versions of lots of offbeat New Yorkers (it’s a steal at around $550,000!). And at the north entrance, VIP guests were greeted by two ivory pillars created by Frieze Artist Award winner Lauren Halsey. The piece, dedicated to the late rapper Nipsey Hussle, saw guests such as Kimberly Drew, Thelma Golden, Fred Eversley, Marcela Guerrero, Beatrix Ruf, Donna de Salvo, Nicole Berry, and Jerry Saltz walk by.

Also impossible to miss is Yayoi Kusama’s mirrored-ball installation Narcissus Garden at Victoria Miro, drawing the attention of, among others, comedian Aziz Ansari. 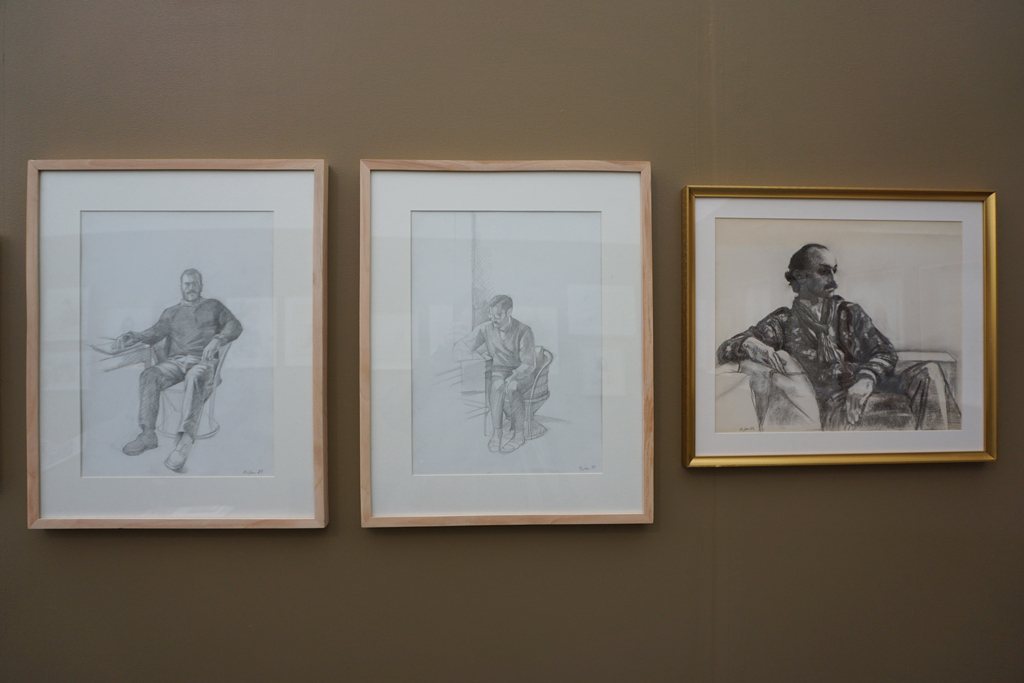 Drawings by Bijan Saffari on offer in the booth of Tehran-based gallery Dastan’s Basement, in the Spotlight section, at Frieze New York 2019.

Those dramatic sights aside, this year seems to be much more about the quiet discoveries, like the intimate portrait drawings of Bijan Saffari at Dastan’s Basement, a gallery from Tehran. Saffari was making work before the Revolution, depicting many members of Tehran’s vibrant avant-garde and gay scenes. After the Revolution, he moved to Paris. Gallery founder Hormoz Hematian said the artist passed away in Paris just last week. The drawings are priced in the extremely affordable (for art collectors) range of $5,000 to $20,000. In the booth was Drawing Center director Laura Hoptman, who was herself just discovering Saffari’s work. And soon came Studio Museum director Thelma Golden. And soon came collectors Shelley Fox Aarons and Philip E. Aarons. This is one purpose international fairs serve: getting the word out about under-recognized artists. Hematian wants to get Saffari into great collections. “I want people to see what his life was about,” he said. 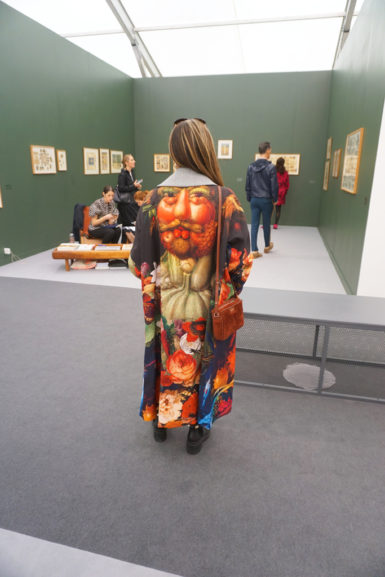 ARTnews “Top 200 Collector” Shelley Fox Aarons wore a coat with an image of Giuseppe Arcimboldo’s Vertumnus on it to the preview of Frieze New York 2019.

Thinner on the ground were Europeans. Mega-dealer Iwan Wirth volunteered that, in general, Europeans collectors haven’t been coming to New York as much as they used to. One adviser told ARTnews that Frieze New York still struggles with being seen, from a collectors’ and advisers’ perspectives, as a one-day event. Dealers pay to set up their booths, but in some cases, the adviser said, they are really only seeing 10 hours of intense action. “How sustainable is that?” the adviser asked.

Among the newcomers to the fair was Mariane Ibrahim, who recently moved her gallery from Seattle to Chicago and presented a suite of paintings by South African artist Thenjiwe Niki Nkosi. The works, rendered in pastel hues, feature gymnasts rearranging mats, posing in front of judges, and performing routines. The dealer said she had sold out her booth.

Ibrahim, who will stage the artist’s first solo show in the United States at her gallery in 2020, said that the paintings’ exploration of blackness in traditionally white spaces also relates to the art world itself. “Artists are also under constant scrutiny and judgement,” she said. “It’s almost biographical—as an art dealer, I’m under scrutiny from the elite and the public. It’s all combined in this work.”

Also making its Frieze debut this year is Tina Keng Gallery, of Taipei and Beijing. For its first showing at an American art fair, the gallery brought together paintings, drawings, and mixed-media pieces by Wu Dayu, Zhang Hongtu, Su Xiaobai, Tony Wong, and others. Celia Lu, a sales rep, said that Frieze is a “good opportunity [for Tina Keng Gallery] to expand to a new audience,” noting that many of the enterprise’s artists are new to collectors in the United States. 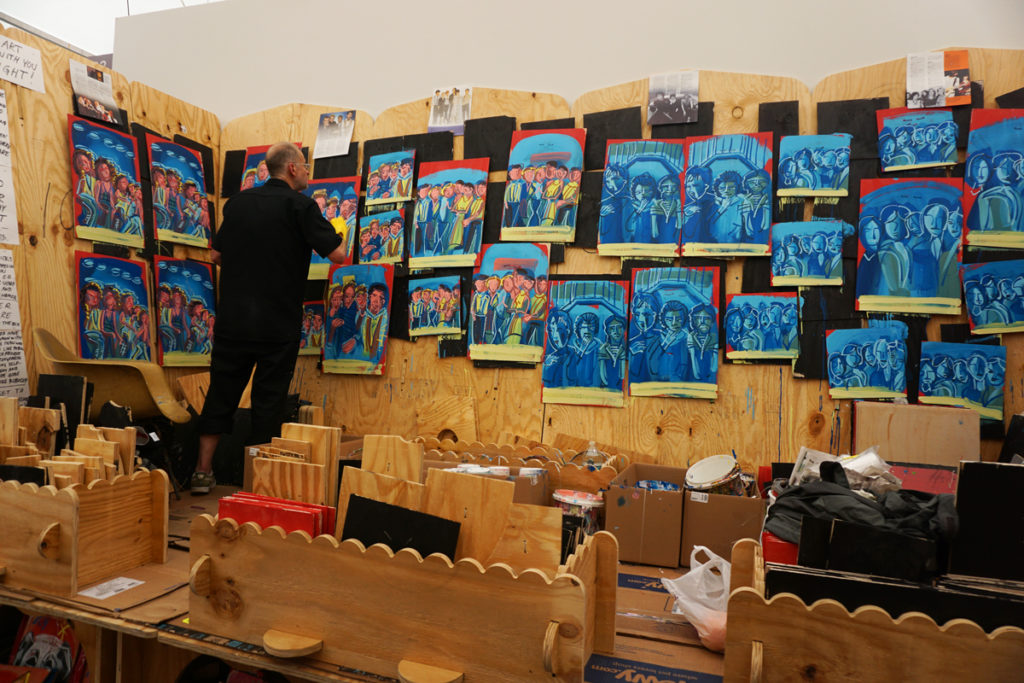 The New York–based P.P.O.W. Gallery offered up something a bit more accessible, interactive, and eccentric than most other booths. Steve Keene, who’s perhaps best known for his graphic design work and collaborations with bands like Pavement, the Silver Jews, Soul Coughing, and others, has set up a hybrid studio-stage where he’ll create new paintings on plywood throughout the course of the fair. Works can be purchased, cash-only, at prices from $10 to $50.

Surrounded by canvases-in-progress and signs with messages like “take art home with you tonight!,” Keene said he believes he’s sold or given away approximately 300,000 works over the past 30 years.

“We’re looking to drive that number up!” Trey Hollis, the gallery’s fair director, said. Hollis noted that Keene did not take a lunch break today and refused coffee this morning, describing the performance as a “meditative state for him.”

Several dealers noted that this year’s crowd was, not only obviously cooler, but also a little more subdued. “It’s pretty slow,” said James Cohan, who had sold some drawings by Spencer Finch and Lee Mullican, each within the price range of $20,000 to $30,000. Another remarking that the day still hadn’t quite warmed up was Emmanuel Perrotin, who by around noon had nevertheless sold 12 pieces by Izumi Kato at prices from $68,000 to $450,000. “It’s colder than last year, which is good,” he remarked. “I’m all positive! Let’s get it started.”

Meanwhile, Los Angeles dealer Hannah Hoffman had nearly sold out her booth. Hoffman presented a solo show of large-scale paintings by Haitian-American artist Andy Robert, which went for prices between $20,000 to $60,000.

Haines Gallery of San Francisco said that a video piece about the O.J. Simpson verdict by Kota Ezawa, who will have work in the upcoming Whitney Biennial, went for around $70,000. 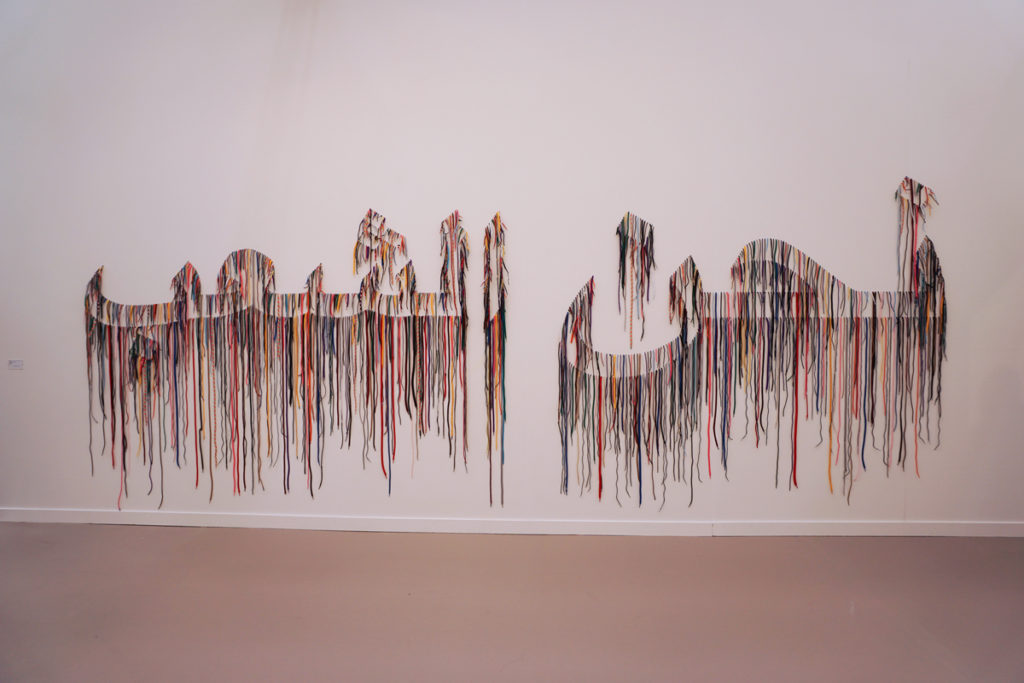 Nari Ward’s We the People (Arabic version), 2018, was on offer at the booth of Lehmann Maupin, of New York, Hong Kong, and Seoul, at Frieze New York 2019.

And there seemed to be action in the six-figure range. Kayne Griffin Corcoran in Los Angeles reported the sale of a Mary Corse painting for $300,000, with a rep terming the action “plentiful.” Hauser & Wirth had success with a Jenny Holzer blowout, selling some of her “Redaction Paintings” with prices from $175,000 to $300,000. A Georg Baselitz painting titled Pawlow in Oslo (2010) was sold by Galerie Thaddaeus Ropac for €750,000 (about $840,000).

Lehmann Maupin sold Nari Ward’s We the People (Arabic version), 2018, to the Sharjah Foundation in the United Arab Emirates—it declined to give a price. In other institutional news, the Brooklyn Museum acquired 13 International Dogs by Gala Porras-Kim, whose work could be found in the booth of L.A.’s Commonwealth and Council.

On the more blue-chip end of the market, the 16-gallery Gagosian empire offered a booth that was very heavy metal, in both senses of that phrase. Large-scale crushed-steel John Chamberlain pieces were displayed against a backdrop of a black wall, which held paintings by Steven Parrino that depicted skull and devil imagery.

Artist Hank Willis Thomas could be seen marveling at a Nick Cave “Sound Suit” perched atop Jack Shainman’s booth, on the market for $150,000. “How do you not talk about how dope that is?” he said. “That’s a ‘holy smokes’ moment. You turn the corner and it’s a beacon.” Shainman joined Thomas, whom he also represents, in his reverie, putting his arm around the artist and greeting him as “bubba.”

“It’s been a terrific fair,” Shainman told ARTnews. “A lot of collectors, a lot of museum people, and sales have been very good.”

“I actually like the fairs,” Thomas said. “I like this fair. I’m just learning so much, and am so enthusiastic about seeing so many artist’s work. How do you turn the corner and see an Alex Katz and not just be happy?”