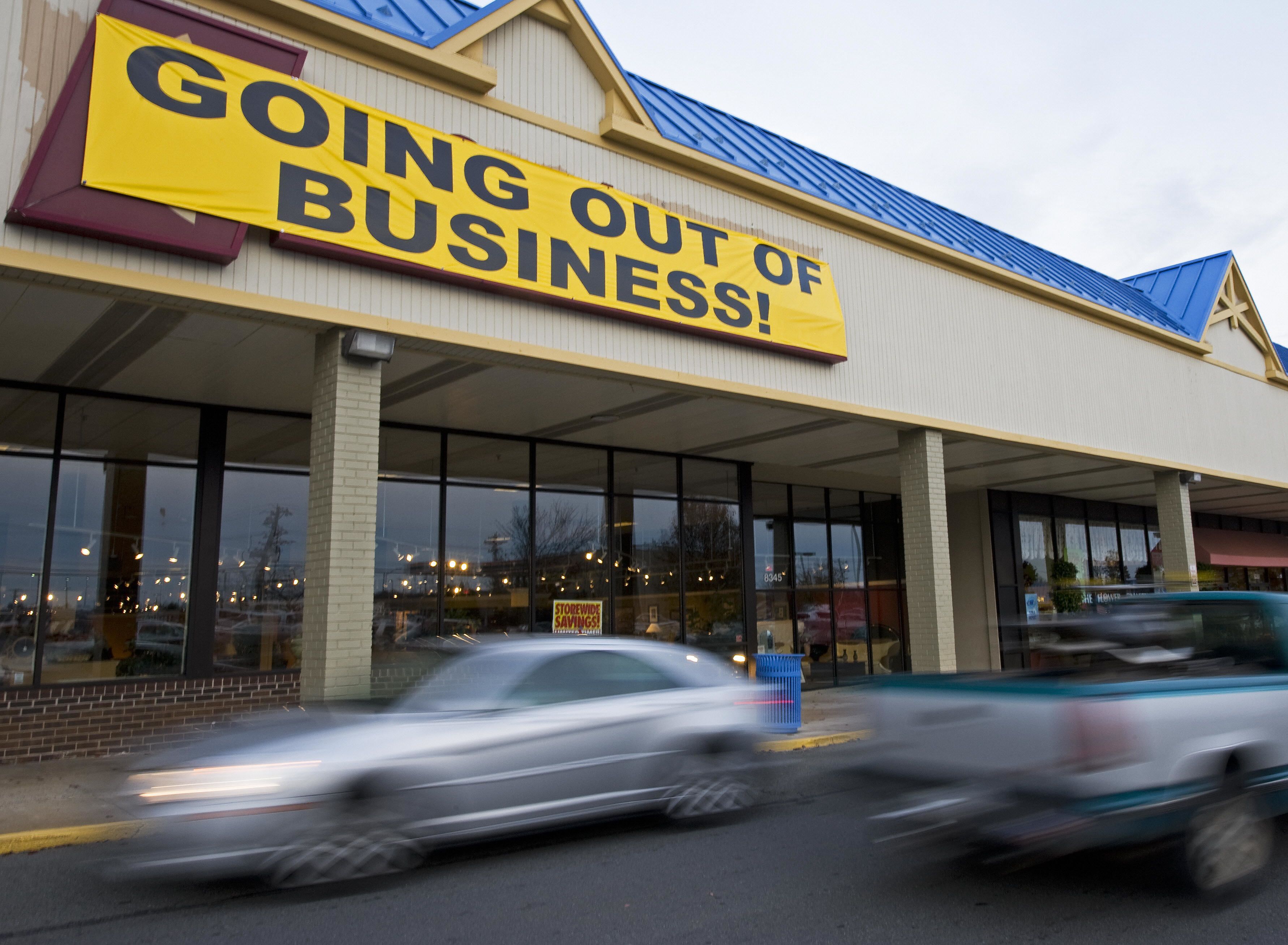 Despite the year being more than halfway over, the pace of store closures doesn’t appear to be slowing down in the retail industry. More companies piled on the bad news this week.

So far, 7,062 store closures have been announced by U.S. retailers this year, according to a tracking done by Coresight Research. And the tally could top 12,000 by the end of 2019, setting a new record, Coresight says. Last year, Coresight tracked 5,524 store closures, down more than 30% from an all-time high of 8,139 closures announced in 2017.

With the back-to-school shopping season and winter holidays looming, most retailers planning to shut stores this year have already shuffled through those announcements so they can shift their focus toward the industry’s busiest times. But analysts say there are still some exhausted businesses teetering on the brink of survival, as sales continue to shift to the internet and younger brands like Warby Parker, Casper and Allbirds steal shoppers’ attention.

Take Mattress Firm as one example. The company emerged from bankruptcy back in October. But it’s still suffering in an increasingly competitive landscape with newer entrants like Casper and Eight Sleep. And it hasn’t been able to achieve all the concessions from landlords that it desired.

All the store closure announcements have also been bad news for U.S. mall owners like Simon and Macerich, which were already struggling with traffic to department stores falling off. The landlords are getting creative with their malls, now, bringing in more food options, e-commerce brands and even apartments, hotels and office spaces. The mall model is being reinvented.

Amid all the closings, there are still retailers opening stores. Coresight has tracked 3,017 store opening announcements so far this year. This past Thursday, Lululemon opened its biggest store ever in Chicago. And there’s a massive, 3-million-square-foot mall called American Dream slated to open in New Jersey on Oct. 25.

Below is a running list of some of the most significant retail store closure announcements so far this year.

A store log outside of the headquarters of Fred’s Pharmacy Memphis, Tennessee.

Fred’s said Friday it will shutter another 129 stores this year, as the company works to repay its debt and diversify its product selection. It was already planning to close 263 shops in 2019. Now, the discount retailer says it will have roughly 80 retail stores and 166 pharmacies still operating following all the closures. Fred’s, which sells groceries and other everyday items like cleaning supplies, has been a victim of e-commerce’s ascent in many households. Its shares have tumbled more than 75% this year to trade below $1.

Accessories chain Charming Charlie filed for Chapter 11 bankruptcy protection earlier this week and said with that it plans to close all 261 stores by the end of August. This marks the second time the retailer has filed for bankruptcy in under two years. The company said it hasn’t been able to come up with a plan to win shoppers back and “ensure long-term profitability” for the business.

A shopper exits a Bed Bath & Beyond store in New York.

Bed Bath & Beyond plans to close at least 40 locations this year — and likely more — while opening 15 stores. The company has said unless it’s able to “negotiate more favorable lease terms with … landlords,” the number of closures will grow. Bed Bath & Beyond, which also owns Christmas Tree Shops, lost its CEO Steven Temares in May, with its financial performance weakening and activist investors pushing for change. The company’s stock is down about 1% for the year.

Fast-fashion chain Topshop is shutting all 11 of its stores in the U.S. The retailer’s London-based parent company, Arcadia Group, filed for bankruptcy protection in May, citing “challenging retail headwinds, changing consumer habits and ever-increasing online competition.” Topshop’s U.S. stores are in major markets like New York, Los Angeles, Las Vegas and Miami. The company hasn’t yet said when it expects the 11 stores to close.

Party City plans to shut about 45 stores in the U.S. this year. That’s more than normal. The party-supply retailer had been closing 10 to 15 stores, on average, annually. Following the announcement, some speculated a global helium shortage was straining its business of selling balloons for birthday parties, weddings and other special occasions. But the retailer said it was able to secure a new source of helium and that the decision to close more stores in 2019 was unrelated to the global shortage. Party City shares are down more than 28% this year.

Pier 1 Imports is planning to shut 57 stores in 2019, and potentially more. The home goods retailer in June said if it’s “unable to achieve our performance goals, sales targets and reductions in occupancies and other costs,” it could shutter as much as 15% of its fleet. Pier 1 closed 30 stores in 2018, leaving it with about 1,000 locations in total across the U.S. Many shoppers have navigated to Amazon and other online retailers to buy things like dishes, wall art and the small furniture accessories that Pier 1 sells. The retailer’s shares are up a little more than 1% for the year.

Pedestrians pass in front of a CVS location in New York.

CVS is closing 46 of its “underperforming” locations across the country this year. That’s still less than 1% of CVS’ roughly 9,600 stores nationwide. But the drugstore chain, like many retailers today, must work toward culling its massive footprint and adding unique services to stores to keep customers coming back. As it shuts some stores, CVS is adding hundreds of SmileDirectClub shops inside certain CVS locations, offering shoppers a cheaper way to straighten their teeth. It’s also opening up locations known as HealthHUBS that boast services and products like blood testing and sleep apnea machines. CVS’ stock is down nearly 12% in 2019.

Gap Inc. is planning to shut 230 of its namesake brand’s stores over the next two years. This fiscal year, Gap said it expects to close about 50 company-owned stores, net of any new openings or repositionings. The apparel retailer in February announced its plans to split its business into two publicly traded companies, one that includes Gap, Banana Republic, Intermix and its women’s and men’s athleisure brands Athleta and Hill City, and another with just Old Navy. Gap Inc. shares have fallen more than 27% this year.

L Brands’ Victoria’s Secret is planning to shut 53 stores this year, as the lingerie retailer struggles to appeal to women with its outdated and over-the-top bras and underwear. On average, the company has been closing roughly 15 stores each year. Meantime, online-based lingerie brands like Adore Me and Lively are opening up stores, potentially making it more difficult for Victoria’s Secret to win back market share. L Brands’ stock is up about 3% year to date.

L Brands’ Bath & Body Works also has some closures planned. The retailer said it intends to shut two dozen locations this year. But it will also be opening 46 stores and renovating more than 170 locations. As Victoria’s Secret’s sales have been in a slump, Bath & Body Works has been a bright spot for L Brands. The company reported in May that Bath & Body Work’s same-store sales surged 13% during the fiscal first quarter. The upbeat news led L Brands to hike its profit outlook for the full year.

Pedestrians are reflected in the window of an Abercrombie & Fitch store in San Francisco.

Specialty apparel retailer Abercrombie & Fitch Co. said it plans to close up to 40 stores during fiscal 2019, after closing 29 locations last year. The company has, meanwhile, been working toward reducing the size of its stores and remodeling existing locations. Abercrombie also said it plans to open additional stores this year, to make up for the closures, after opening 22 stores in 2018. It also owns the Hollister clothing brand. The retailer’s stock has fallen roughly 10% in 2019.

Teen apparel retailer Charlotte Russe is liquidating and closing all of its stores, after filing for bankruptcy protection in February. At the time, it was only planning to shut 94 stores. But now, the company will be closing more than 500 locations across the country, after a liquidator won the auction for its business in bankruptcy court. Many of its stores are found within shopping malls.

A pedestrian walks by a Payless Shoe Source store on April 5, 2017 in San Francisco.

Payless ShoeSource filed for bankruptcy in February and has started the process of shutting all 2,500 of its stores across North America. Payless struggled with a heavy debt load and also said in court documents it faced “unanticipated” delays from its suppliers in recent years that forced it to sell inventory at deep discounts. It’s also fallen victim to more consumers shopping for footwear online.

Pedestrians walk past a Gymboree store in San Francisco, California.

When kids clothing company Gymboree filed for bankruptcy protection in January, it said it would close all 800 of its Gymboree and Crazy 8 stores. It’s since sold the rights associated with both Gymboree and its Crazy 8 brand to Children’s Place, while Gap has acquired Gymboree’s Janie and Jack brand’s intellectual property, its website, customer data and other assets.

Discount chain Dollar Tree said it plans to close 390 Family Dollar stores this year while it renovates 1,000 other locations. After buying Family Dollar in 2015, Dollar Tree has been left with the task of improving the appearance of those stores, many of which are run down. It’s also been trying to cut costs. Dollar Tree shares are up more than 24% year to date.

Women’s clothing retailer Chico’s said it will shut between 60 to 80 stores in fiscal 2019. The company overall intends to close at least 250 stores in the U.S. over the next three years. It joins a list of apparel companies that are struggling to stay afloat, as more sales move online and shoppers are lured to fast-fashion brands like Zara. Chico’s shares have tumbled more than 38% this year.

Department store chain J.C. Penney said it plans to close 18 department stores — in addition to nine home and furniture shops — in 2019. The company has already hinted there will be additional closures to come in 2020 and beyond, as it works to whittle away at its massive real estate footprint. It’s hoping to find a turnaround strategy that will allow it to avoid the same fate of Sears and Bon-Ton. Penney’s stock has been hovering around $1, and shares have climbed about 12% this year.

Apple 2020 iPhones could have a 3D camera on back: Kuo

Target still has room to climb after 20% gain, Citi says