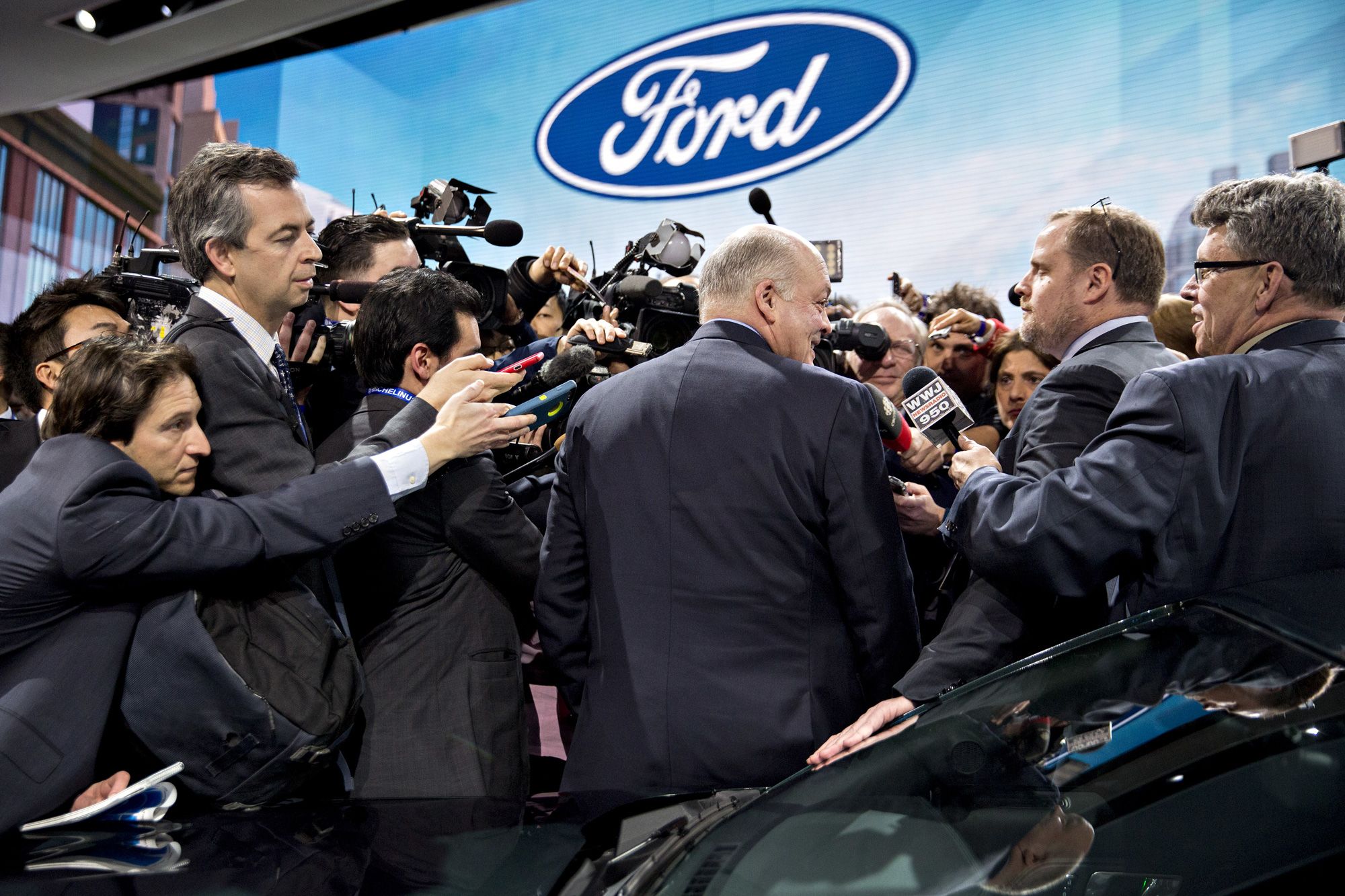 Jim Hackett, president and chief executive officer of Ford Motor Co., center, speaks to members of the media at an event during the 2018 North American International Auto Show (NAIAS) in Detroit, Jan. 14, 2018.

For the last several years it seemed like Ford Motor could do nothing right, at least by Wall Street’s standards. Now suddenly, it’s a different story.

Shares of the second largest automaker on Friday surged past the $10 mark for the first time since last August. The stock, which has a market value of $41.5 billion, rose more than 10% Friday, logging its best performance since April 24, 2009. The surge capped off a seven-week streak of weekly gains that have boosted the shares 23.6%.

The shocking thing is the move came despite a 34% drop in first-quarter net income. What certainly mattered more to investors was the fact that Ford’s adjusted profit hit 44 cents per share, well above the 27-cent average analysts polled by Refinitiv projected.

“Our results … signal positive momentum for Ford,” said CEO Jim Hackett during a conference call with analysts and the media, adding that, “we have a solid plan to create value in the near and long-term.”

That’s something that Hackett has been saying for nearly two years, almost from the moment he was appointed to replace CEO Mark Fields in a May 2017 management shake-up. The question is why are analysts finally taking him seriously now – especially with Ford’s retiring Chief Financial Officer Bob Shanks cautioning those on the call that the automaker faces a “volatile environment with very strong competition.”

Indeed, a closer look at the first-quarter numbers reveals that while Ford performed well in its North American home – margins there climbing nearly a full point, to 8.7% – it faced significant problems in every other key market, from Europe to China.

Whiston, who currently rates Ford a buy, points to several positive factors, including the cuts now underway in Europe and South America, which should help profits in the future, and a broad product rollout, which could excite new buyers.

It seems investors are finally cheering the risky bets Ford is making to shift away from sedans and to invest in new technologies. And it comes at a time when the market is growing more wary of rival Tesla, which saw a sharp selloff after its earnings. The result: Ford’s market capitalization is now greater than Tesla’s for the first time since April 2017.

This month’s New York International Auto Show brought to the spotlight the Lincoln Corsair – the latest in a procession of new products aimed at reviving Ford’s long-struggling Lincoln brand. The crossover joins the Nautilus, a midsize CUV that launched at the start of the 2019 model-year, and the big Aviator, set to roll into showrooms later this year. For the flagship “Blue Oval” brand, Ford has updated the Explorer, Edge and, also for New York, the Escape, its second best-selling nameplate.

Meanwhile, it has brought back to life the midsize Ranger pickup and is preparing the return of the Bronco SUV this coming year.

“It’s all about trucks,” said Whiston.

Backing this up is sales data, which shows Ford’s utility vehicles and, in particular, its best-selling F-Series pickup line are propping up the corporate balance sheet.

And that, company executives insisted during the conference call Thursday, provides solid justification for the controversial decision to phase out virtually all of its sedans and coupes. (The Mustang being the only notable exception on the Ford brand side.)

The product offensive isn’t limited to the North American market, noted Jim Farley, who was this month named Ford’s president of new businesses, technology and strategy. In the Chinese market, Ford is in the midst of refreshing or adding 30 vehicles to its line-up over three years.

China will maintain at least some passenger car models, such as the big Lincoln Continental, the luxury brand’s president, Joy Falotico, told CNBC last week, reflecting regional tastes. But even there, Ford is shifting more and more towards a truck-based line-up. The new Lincoln Aviator, company officials noted during a New York auto show news conference last week, will be built in both the U.S. and China.

Ford clearly needs a boost in what has become the world’s largest motor vehicle market, its sales plunging there by 40% last year. It got off to a relatively late start in China, waiting years to make a serious investment that ceded dominance to cross-town rival General Motors and German giant Volkswagen.

Despite some momentum coming with the Chinese launch of the Lincoln brand, Ford continues to struggle. Sales further declined during the first quarter, though the automaker was able to reduce its losses in the market to $28 million from $150 million a year ago. But even there, a favorable shift in exchange rates played as important a role as ongoing cost-cutting efforts.

Cost-cutting is clearly the name of the game for Ford, especially in two other troubled markets. As part of a broad, global restructuring, the automaker announced in February plans to walk away from the heavy commercial truck business in Latin America, closing a plant in San Bernardo, Brazil that had once been among its biggest in the region. But, last year, the factory produced just 33,000 trucks, or barely 11 per employee, an unsustainable formula.

There has been widespread speculation that Ford could move to abandon Latin America entirely. Ford officials declined to directly address plans for that market, but Hackett did say the company is “accelerating” its efforts to fix problems in South America, as well as Russia and Europe – the latter market delivering a slight, albeit promising, profit for the first quarter.

How far Ford will go in those three markets will likely remain a matter of speculation for some time, especially as analysts compare what it is doing with its rival GM. Since Mary Barra was named CEO in 2014, GM has reversed a century-old growth strategy by closing money-losing operations in Russia and South Africa and selling off its European subsidiary Opel.

Ford doesn’t appear to be ruling out any option – not if one considers the moves it has been making on the alliance front.

In January, the automaker confirmed months of rumors by announcing plans to partner with VW to develop and build light commercial vehicles for overseas markets. It also confirmed that the two erstwhile competitors are discussing a number of other options, including ways to work together on the development of both electrified and autonomous vehicles. During the Thursday conference call, Shanks said those discussions are “going very well,” though he didn’t set a target date for announcing any additional joint ventures.

While the Volkswagen talks have garnered most of the attention, Ford has also been expanding its ties to one of India’s largest homegrown auto companies, Mahindra & Mahindra. The companies are partnering to develop a midsize SUV for emerging markets and a small electric vehicle.

“Listening to our customers and incorporating their future needs is the core premise of this collaboration,” Farley said last month. “With utility vehicles and electrification as key focus areas, we are glad to see the progress our two companies have made.”

While Ford officials have declined to comment, there has been widespread speculation that the automaker could eventually step back in several key markets, possibly letting Mahindra play lead in India and Volkswagen take on a similar role in South America.

Whether or not that will happen, Ford appears to see two regions as key to its future growth: China and North America.

Even in the home market, there is plenty to do, Joe Hinrichs, who this month was named president of Ford’s automotive operations said. The decision to focus on the light truck market is one of the key steps, but Ford has to press for greater efficiencies, Hinrichs stressed. One of the ways the automaker hopes to do that, he explained is “by flattening the organization … removing layers of bureaucracy.”

This month’s management realignment will help to do that, he added. Ford has traditionally operated with lots of corporate chimneys, or fiefdoms. One goal is to reduce the number of meetings and speed up the decision-making process, Hinrichs explained.

The company also hopes to become more nimble by learning from some of its partners, including Rivian. Ford invested $500 million in the Detroit-based battery-electric vehicle startup this week. The alliance will let Ford use Rivian’s skateboard-like platform for at least one, and likely several, future products.

“We are learning a lot from this wonderful company and their fresh approach,” said Hackett, especially when it comes to operating at Silicon Valley speeds.

In turn, Rivian’s CEO R.J. Scaringe expects his own team to learn about high-volume manufacturing from the company that invented the movable assembly line.

The $500 million Ford plans to invest in Rivian comes on top of another $11 billion that it last year said would be spent to begin electrifying its line-up. Ford was an early pioneer in battery propulsion but has fallen behind rivals like Tesla, as well as GM and VW. It will only launch its first long-range electric vehicle – a high-performance crossover influenced by the Mustang – next year.

Ford also has been ramping up its spending on self-driving vehicle technology. Among other things, it invested $1 billion in Argo AI. With the startup’s help, Ford’s autonomous program is now considered one of the most advanced in the industry, according to Navigant Research. It lags behind only such leaders as Alphabet’s Waymo and GM’s Cruise Automation.

Significantly, Ford is ramping up the number of places it is testing self-driving prototypes, Farley noted during the Thursday earnings call. While places like Phoenix and Silicon Valley have become ground zero for most of those working on autonomous technology, Ford has chosen places with challenging weather and traffic conditions that push the technology to its limits.

“We are picking cities like Miami (and Washington, D.C.) that are very complex,” said Farley.

One of the concerns that has nagged analysts and investors has been how Ford – or any of its competitors – will turn money-losing battery car and autonomous vehicle programs into profit centers. That’s something the recent management realignment is meant to address, Hinrichs said in an interview. The changes will allow it to focus on what it can do to make money now while developing the businesses it will need in the future.

But it’s far from certain what Ford’s balance sheet will look like in the near to mid-term. Shanks, in his last earnings call, was blunt in warning that the first-quarter results could prove to be Ford’s strongest of the current year.

There are clear signs that the U.S. new vehicle market is weakening. LMC Automotive, among others, is forecasting volume will drop to somewhere between 16.6 million and 16.8 million from just over 17.2 million in 2018. Ford is likely to face an even bigger decline, Shanks said, as it will have plenty of factory downtime as it switches over to those many new models.

That said, “things will only get better” as those new products start pouring into showrooms, said Jeremy Acevedo, the manager of industry analysis for Edmunds. If the launches for the new Aviator and Corsair go well,” he added, “Lincoln could be this year’s surprising comeback story.”

While Ford’s stock has risen by 36% since the beginning of 2019, it is still lagging far from the peaks it set early in the decade when it was hailed as the only Detroit automaker that didn’t file for bankruptcy. Whether the current enthusiasm continues is far from certain. Ford has plenty of challenges to cope with, but as it lays out its new strategy, investors seem to be betting it is on the right track.