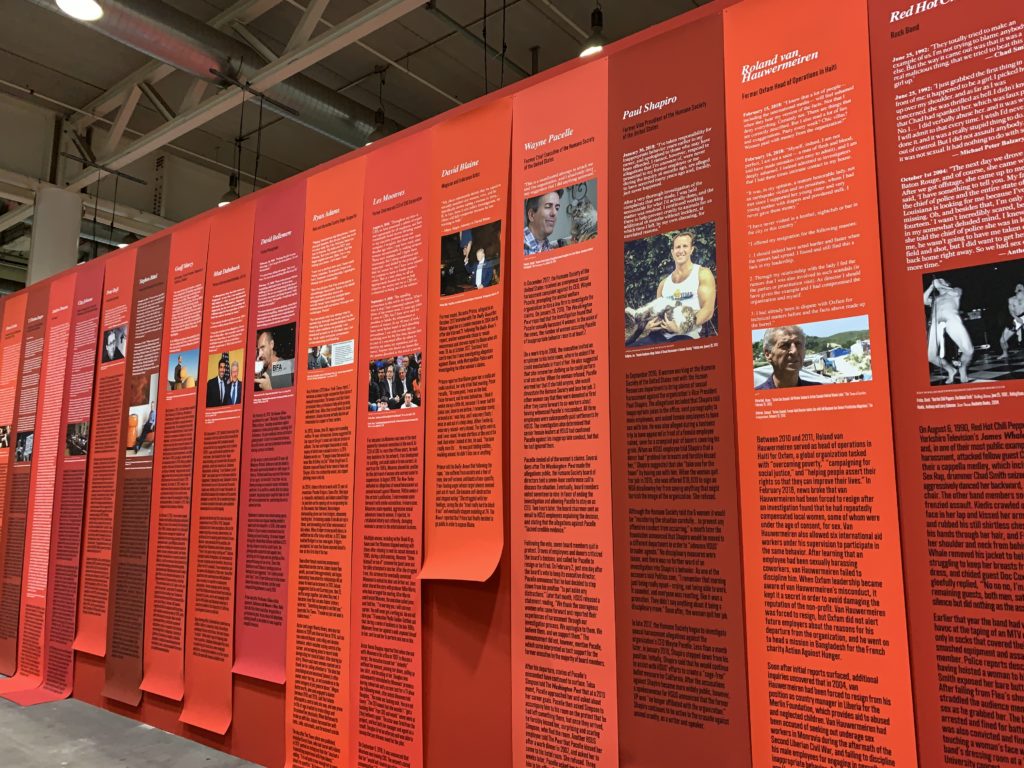 After a complaint about her work went viral on Twitter, artist Andrea Bowers has altered a monumental installation she currently has on view at Art Basel.

On Tuesday, Helen Donahue, a writer and marketing specialist, tweeted that Bowers did not have permission to use her photo in the installation Open Secret (2018), which is included in the fair’s “Unlimited” section for large-scale presentations. The piece, which “documents the development of #MeToo and Time’s Up,” according to the fair’s website, includes details about recent accusations of sexual harassment and assault.

In a statement to ARTnews, Bowers said, “I, Andrea Bowers would like to apologize to the survivor whose image was included in my piece. I should have asked for her consent. She has asked that the panel including her photo be removed and I have honored the request. I have reached out privately and am very much looking forward to listening.”

“Unlimited” opened on Monday, and when the section first went on view, images of Donahue were included. The photographs showed bruises on her face and body, and text below the pictures described assaults that Donahue said were perpetrated by the freelance writer and editor Michael Hafford. The images have been replaced by information about sexual harassment allegations leveled against the magician and performer David Blaine.

On Twitter, Donahue wrote, “cool that my fucking photos and trauma are heading art basel thx for exploiting us for ‘art.’ ” She tagged Bowers’s Twitter account, and added, “DO YOU KNOW HOW FUCKING INSANE IT IS TO FIND OUT MY BEAT UP FACE AND BODY ARE ON DISPLAY AS ART RN FOR RICH PPL TO GAWK AT THRU A STRANGER’S INSTAGRAM STORY.” Donahue’s post also included images of Open Secret and a screenshot of the headline of an Artnet News story about the work from April.

Subsequent tweets by Donahue showed that New York’s Andrew Kreps Gallery, which represents Bowers, had said in an Instagram comment, “the images in the work solely depict the accused, not the survivors. Each individual print is based on publicly reported claims and the public response (printed in the font of the original source) of the accused.” On Twitter, Donahue wrote of the enterprise’s response, “this gallery is straight up lying to people in real time about using my image in their exploitative bullshit.”

Galleries representing the artist—Andrew Kreps, Kaufmann Repetto (of New York and Milan), Vielmetter Los Angeles, and Capitain Petzel (of Berlin)—said in a statement that they “would also like to issue an apology to the survivor pictured in the piece. The galleries stand by Andrea Bowers and her work, and support the conversation that has only just begun.”

Gianni Jetzer, who curated this year’s “Unlimited” section, did not respond to ARTnews’s request for comment.