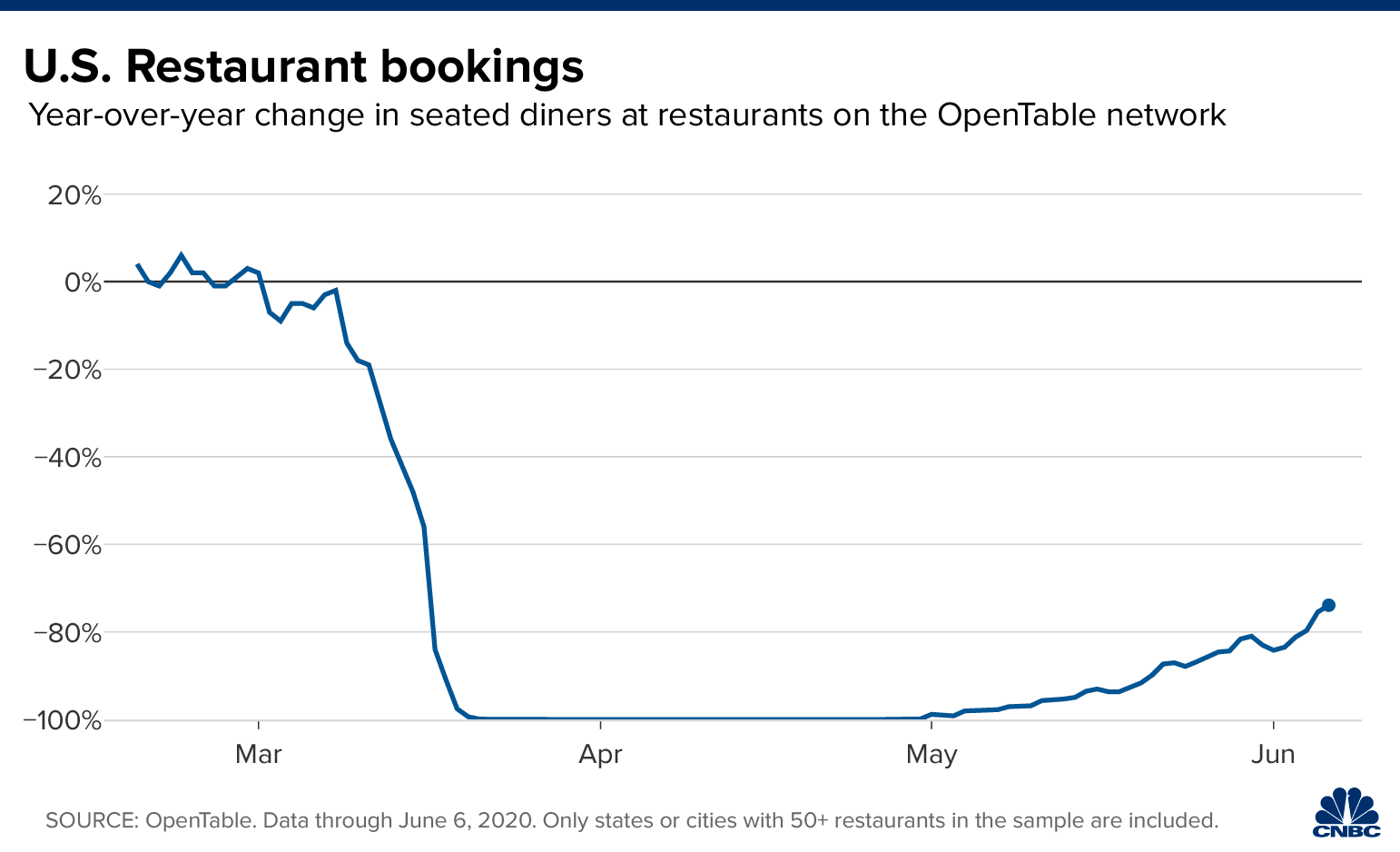 Passengers wait to disembark the plane on their arrival at Hartsfield-Jackson Atlanta International Airport in Atlanta, on April 23, 2020.Chandan Khanna | AFP | Getty ImagesAs the U.S. economy makes further progress in recovering from the harsh blow of the coronavirus pandemic, certain industries are showing signs of recovery. Home purchases are up compared to last year, reservations are increasing at restaurants and hotel occupancy rates are on the rise. Even the battered air travel industry has seen some slight growth in passengers, indicating that the worst might be over for the U.S. economy.These five charts illustrate this progress as the economy recovers from one of the most significant downturns in history. Direction requestsRequests for transit directions have crept up further and are at almost half of their previous levels prior to the pandemic, according to the latest data from navigation app Apple Maps. This boost follows New York City entering into phase one of reopening this week, allowing many residents to return to work. This week also saw a dip in walking directions as people may be traveling further and relying more on driving and public transportation.Restaurant bookingsRestaurant bookings have continued their steady ascent as more states have loosened restrictions on indoor dining and raised customer capacity limits. Even cities like San Francisco that only allow outdoor dining have enabled restaurants to expand dining spaces onto streets and sidewalks. With this easing of restrictions, restaurant bookings are at around 70% of their previous levels, according to data from online reservation service OpenTable network. The increase comes ahead of the summer season during which restaurants typically add jobs. Hotel occupancy More people are willing to travel as coronavirus restrictions have been lifted across the country. Hotel occupancy rates are now just under 40%, according to data from global hospitality research company STR. The highest occupancy levels were reported in parts of New York City as well as popular destinations in Florida, Texas and South Carolina, according to STR. Air travel The number of passengers traveling through airport checkpoints is down about 80% compared to last year, according to data from the Transportation Security Administration. Though there have been increases in passengers, it still seems like travelers may be wary of being exposed to the virus on a plane and that the airline industry still faces significant challenges ahead. Home purchases Mortgage applications for buying single-family homes are up 13% compared to the same week last year, according to the latest data from the Mortgage Bankers Association. The increase in home purchases could signal that the housing market is on one of the fastest roads to recovery amid reopening progress.

This $100 billion dollar industry shut down by coronavirus is about to reopen
Oscars delayed until April 25; film eligibility window extended
To Top
error: Content is protected !!