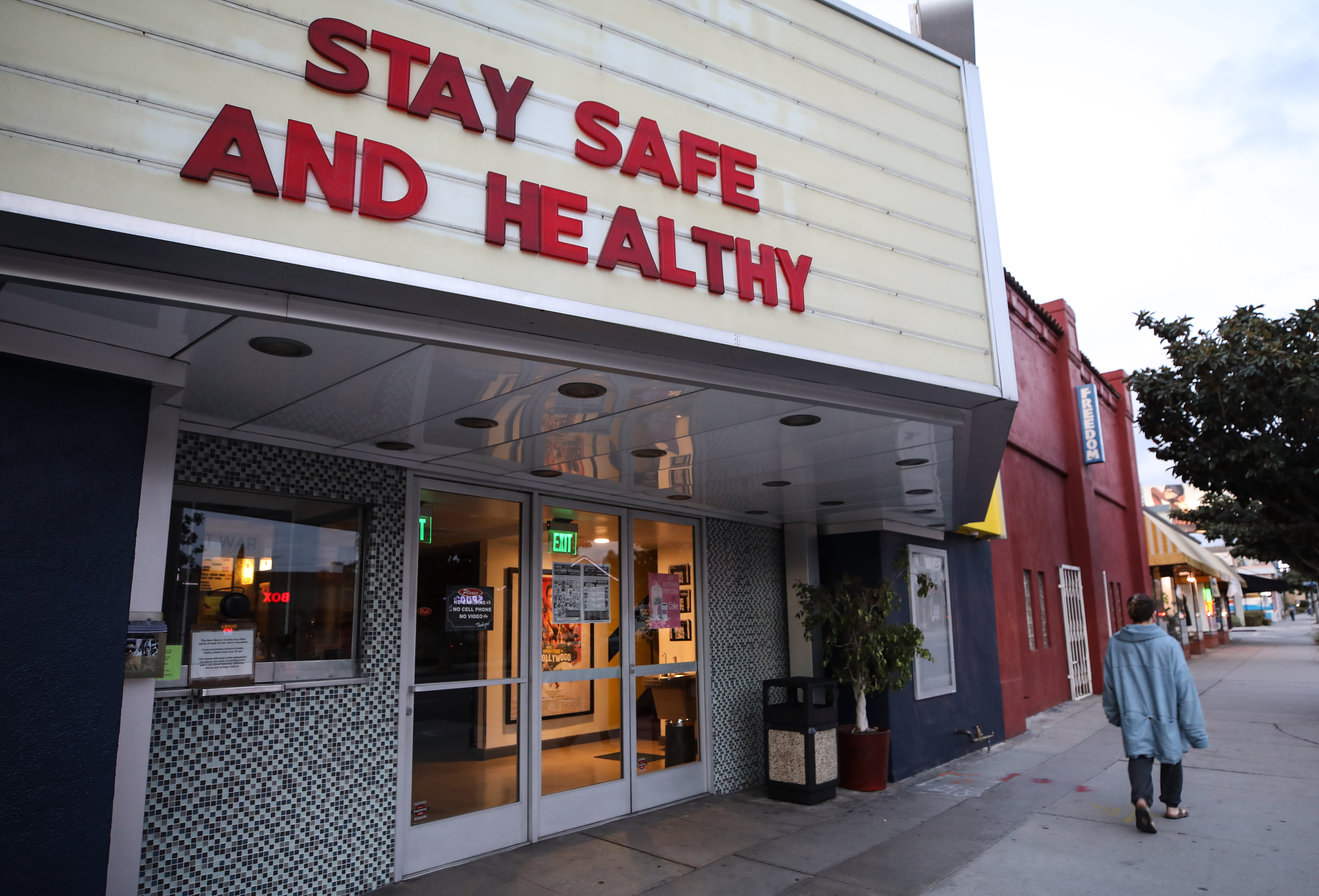 A pedestrian walks past a shuttered movie theater, with the message ‘Stay Safe and Healthy’ displayed on the marquee, on March 19, 2020 in Los Angeles, California.Mario Tama | Getty ImagesMoviegoers aren’t the only ones feeling trepidation about returning to cinemas during the coronavirus pandemic. Film critics are “filled with dread” over having to return to theaters and screening rooms, especially if face coverings are not being required.”I’m excited to see movies in theaters again,” a freelance film critic and editor from New York told CNBC. “I’m not sure when I will be doing that, though. I don’t have faith in the major chains that are not mandating that patrons wear masks. I think that’s incredibly reckless.”A number of the major movie theater chains in the U.S. have made mask-wearing optional. Cinemark will encourage masks, but not require customers to wear them unless local health care officials make it mandatory. AMC was set to follow a similar policy because of a desire not to be “drawn into a political controversy.” However, backlash from consumers on social media forced the company to reverse course. Following this backlash Regal also altered its policy and is mandating masks be worn by patrons.Critics, who were already uncertain about how safe spending several hours in a closed space with recirculating air, also found those comments disconcerting. CNBC spoke to a number of New York and Los Angeles-based critics, most of whom wished to remain anonymous for fear of retribution from theater owners.One critic compared companies that aren’t requiring masks to the mayor from the movie “Jaws.” “As far as I see it, companies being so cavalier about masks are putting profit possibilities before the public health, it’s the move of a horror movie villain,” she said. And masks might not be the only deal breaker for consumers and critics. Even after AMC altered its policy, that did not seem to assuage the critics CNBC’s spoke with on Friday. There was the concern that movie theaters would not be able to enforce their mask policies once the house lights go down.”I’m not waiting on movie studios or theater chains to tell me it’s safe to go to the movies,” the freelance film critic and editor from New York said.That sentiment was shared by several other critics, who felt these movie theater chains are “putting the dollar ahead of public safety.””It’s gross,” a Los Angeles-based critic and editor with 8 years of experience in the industry said. “No one is happy about it. Certainly not film critics.”There are many who are worried that it’s too soon for public gatherings to take place in contained spaces like theaters. While there are fewer cases in early hot spots such as New York state, cases are accelerating in other parts of the U.S. such as Texas and Florida.Ultimately, the federal government has allowed states to make their own guidelines for handling the outbreak. And, in some cases, the onus fell on business owners, who were not really equipped to make those kinds of health and safety decisions, an industry insider, who wished to remain anonymous, told CNBC.”The lack of consensus about guidance and information and the best way to be safe, it doesn’t fill me with a lot of confidence,” a New York-based critic with 15 years of experience in the industry said. “It seems like everyone is allowed to keep their own rules.”That lack of consistency and the uncertainty of how safe theaters actually are for patrons, has made some critics feel “queasy.””I wish they weren’t putting critics in this position,” the Los Angeles-based critic said. “Hopefully, we get the option to have digital screeners, but I doubt that will happen.”Film reviews are an essential part of a film studio’s marketing, as positive reviews can drive up ticket sales and consumer interest. Often studios will utilize snippets from reviews in commercials and posters, touting favorable critiques. For the most part film reviews are done either in a movie theater or in a studio screening room. However, on occasion, studios will send digital copies of films to reviewers. Critics are skeptical that studios will opt to send these digital screeners, especially as director Christopher Nolan has been adamant that his upcoming film “Tenet” is one that needs to be seen on the big screen in order to be appreciated.”There’s a lot of concern among critics about this, because for our jobs we may be forced to decide between an assignment and our health,” the New York-based critic and editor said. “And not just ours but those in our homes.”Other films like “Mulan,” which was set to be released in March, have already been reviewed by critics. They are just waiting on the embargo to lift to share their thoughts on the film. “I really think that going forward critics have a higher responsibility,” Kristen Page-Kirby, a Washington, D.C.-based critic, said. “It used to be that part of reviewing a film was to tell readers whether or not the film was worth the often substantial ticket price. Now the price is higher. How good does a film have to be that I would feel comfortable telling people really should see it in a full theater?”