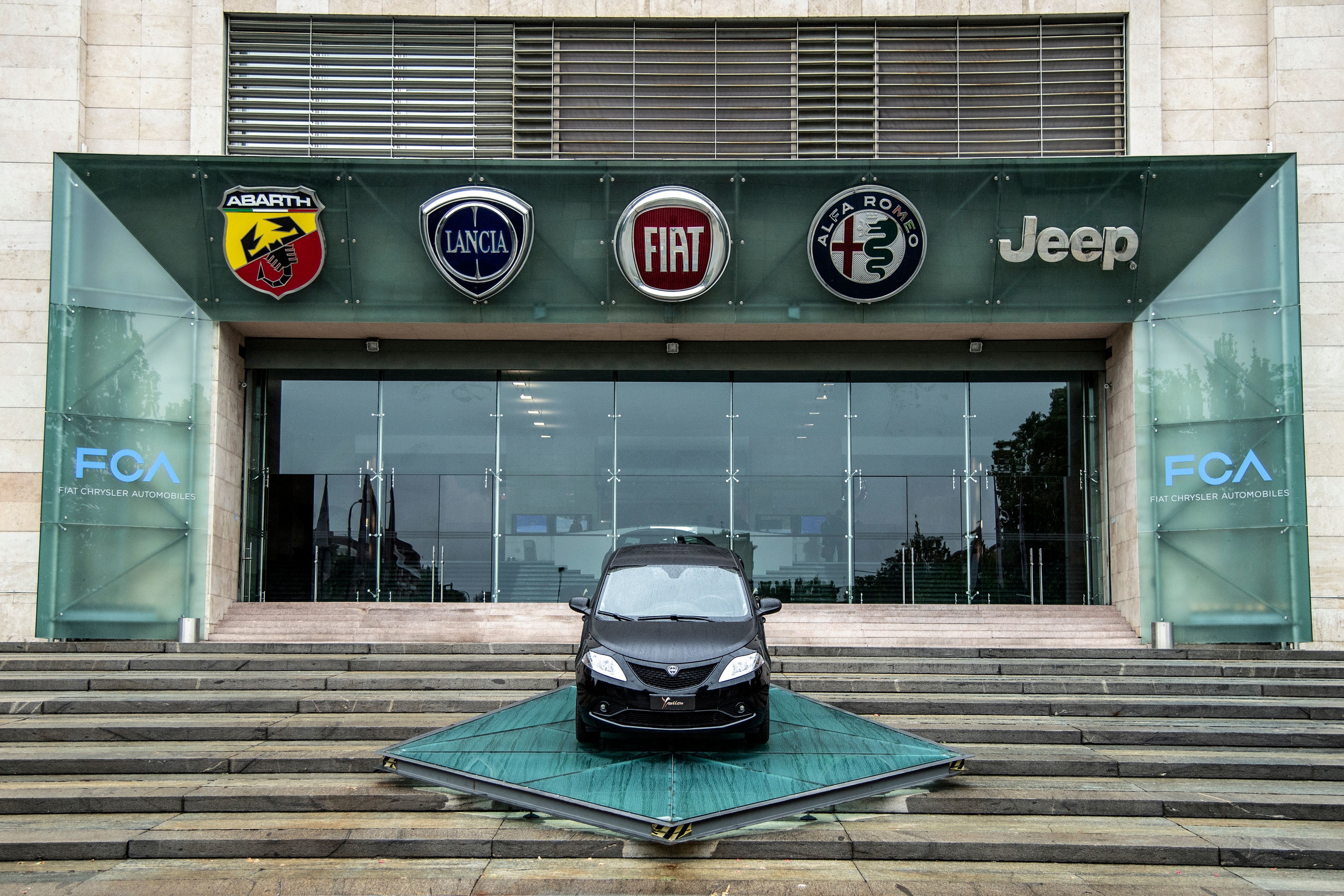 The logos of automobile companies (LtoR) Abarth, Lancia, Fiat, Alfa Romeo and Jeep are pictured at the entrance to the Fiat Chrysler Automobiles (FCA) at the Fiat Mirafiori car plant on May 27, 2019 in Turin, northern Italy.

Fiat Chrysler’s proposed $40 billion merger with Renault, which would create the world’s third-largest automaker, is far from a done deal.

The merger, announced Monday, is fraught with “significant execution risks” that could scuttle it altogether, according to Moody’s Investors Service. If the deal gets done at all, it will take a minimum of a year and up to 18 months to complete, according to an executive at Fiat Chrysler briefed on the negotiations.

The deal comes at a critical time for the automakers. Global sales are slowing after nine years of growth, and the industry is trying to come up with extraordinary amounts of cash to invest in autonomous driving and electric vehicles.

Jim Press, the former deputy CEO for Chrysler Group, called it a “historic deal” that will likely be followed by others in the industry.

“The consolidation in the global auto business is something that has to happen,” he said on CNBC’s “Closing Bell ” on Tuesday. “The pressure on profits is increasing at a time when the investments required for the new technology of autonomous vehicles and electric transition, all of that is adding a significant burden on investments.”

The Italian-American automaker has offered Renault a 50-50 merger of equals that would create an 11-member board split equally between Renault and Fiat Chrysler, with one seat going to Nissan. Fiat Chrysler’s shareholders would receive a special dividend of 2.5 billion euros (about $2.78 billion) to account for Fiat Chrysler’s higher market value. Existing shareholders of both automakers would get half of the combined company.

Fiat Chrysler said the deal would save an average of roughly 5 billion euros (about $5.57 billion) a year without closing any plants, which is an important detail that should help smooth the deal with unions, politicians and regulators. France’s Finance Minister Bruno le Maire told RTL radio on Tuesday he wants “four guarantees,” including “the preservation of industrial jobs and sites in France.”

The deal is significantly complicated by the French automaker’s role in the Renault-Nissan-Mitsubishi Alliance. Collectively, the alliance forms the world’s second-largest automotive group, with 2018 sales of 10.8 million vehicles. Renault merging with Fiat Chrysler would create the world’s third-largest automaker, with 8.7 million in annual sales.

The alliance itself is on shaky ground since its longtime chief, Carlos Ghosn, was arrested in November in what many consider a corporate coup orchestrated by Nissan, which has accused him of a variety of financial misdeeds.

“It’s regressing fast,” according to a high-level executive with the alliance, who asked not to be identified because the internal discussions are private. He said the operation “could come apart” in the months ahead, with Fiat Chrysler’s merger proposal adding to the ongoing friction.

The alliance, initially between Renault and Nissan, was formed 20 years ago when the French automaker invested $5.4 billion to keep the then-failing Japanese manufacturer from going under. Renault took a controlling stake in Nissan and subsequently increased that to 43.4%. The Japanese carmaker, in turn, has a 15% stake in its ally. Over those two decades, Renault and Nissan have claimed to develop a closely interwoven business relationship, with the two sharing platforms, engines and other technology as well as parts purchasing, among other things.

Ghosn is a powerful and charismatic auto executive who wore multiple hats up until his arrest — he ran the alliance, was chairman of Nissan and CEO of Renault. Because of the structure of the alliance, however, the two companies haven’t achieved all the benefits executives had hoped, Ghosn has previously said. Their engineering units, for instance, still operate largely autonomously, said the alliance executive.

That’s partly why in the year leading up to his arrest, Ghosn was trying to orchestrate a full merger between Renault and Nissan that many industry executives believe may have contributed to Nissan’s move to have him prosecuted.

Nissan has made it clear it doesn’t want to merge with Renault, rejecting another merger attempt by the French automaker last month. The new proposal from Fiat Chrysler would effectively shelve those plans. Nissan and Mitsubishi would get about 1 billion euros ($1.11 billion) a year in “synergies” stemming from the merger, Fiat Chrysler said Monday.

Executives from the three alliance companies gathered at Nissan’s headquarters in Yokohama on Wednesday for a prescheduled meeting. Japan’s Nikkei newspaper reported that Nissan wasn’t opposed to the deal, while noting that “many details need to be worked out,” citing an unnamed Nissan executive who attended the meeting.

Since Ghosn’s arrest, Nissan CEO Hiroto Saikawa has met with senior officials from Renault on several occasions. Both sides have attempted to put a positive face on their relationship. But Saikawa has stressed internally that there is no interest on the Japanese automaker’s part for a full merger right now, the alliance executive said, adding that “hubris and arrogance” on the part of “senior executives at both companies” are making it increasingly hard to hold the group together.

Ghosn actually initiated merger talks in 2008 between Renault and Nissan and what was just Chrysler when it was teetering on insolvency, said a former Chrysler executive involved in those negotiations. The effort failed because of the U.S. automaker’s troubled finance unit during the financial crisis.

“The tie-up between Chrysler and Renault made sense in 2008,” Press said in a separate interview. He should know, as vice chairman and co-president of Chrysler at that time. “It makes even more sense today given the market strength of Fiat Chrysler [in SUVs and pickups] and their similar cultures that would make them uniquely suited to work well together.” Press now heads the RML Automotive dealer network.

One of the questions the proposed merger raises is how the new management structure would shake out. The consensus sees Fiat Chrysler Chairman John Elkann filling the same role at the combined company, say industry analysts and executives. Elkann is heir to the Fiat founding family, the Agnellis, who currently hold a 29% stake of the automaker’s stock and 44% of its voting rights. Elkann played a critical role in the merger.

“He has the phone book,” said one of the executives briefed on the negotiations. Elkann is also critical in helping to smooth approval from the French government, which holds a 15% stake in Renault, these people said.

Renault’s chairman, Jean-Dominique Senard, is the most likely candidate for CEO of the combined company, industry analysts and executives say.

There could be a fight over the No. 3 role, president, between the two companies’ current CEOs: Thierry Bollore at Renault and Mike Manley at Fiat Chrysler.

Manley handled much of the nitty-gritty details of the deal, the executive briefed on the negotiations said. There were some questions raised in the press, though, about the timing of his elevation shortly after former CEO Sergio Marchionne’s untimely death last summer. Manley currently has strong support from the automaker’s board, industry analysts and executives say.

Bollore was a longtime colleague of Ghosn’s, though that currently carries far less weight than it would have a year ago. European newspapers reported that Bollore’s own promotion was also controversial, following Ghosn’s unexpected arrest last year, and caused some tension on the board.

How the operations and production might come together is a question yet to be answered. Among other things, would the merged entity maintain the broad portfolio of brands now in place? As part of the five-year plan outlined by Marchionne in June 2018, Fiat Chrysler’s two namesake brands were set to scale back significantly, leading many analysts to question how much longer they might be around. In recent months, with sales continuing to weaken, many have begun to speculate that the Fiat marque could soon be pulled out of the U.S. market.

The other uncertainty is Alfa Romeo. Under the current plan — as with the prior one — that Italian marque is getting billions of dollars in product development funding. But sales of new models such as the Giulia sedan and Stelvio SUV have been disappointing.

“At least for now, we intend to continue following the five-year plan,” said the Fiat Chrysler executive. What might happen after a merger is another matter.

The move by Fiat Chrysler to propose a merger with Renault caught many observers by surprise. After being appointed to replace Marchionne last year, Fiat Chrysler’s Manley appeared to be downplaying his mentor’s push to find a partner.

In fact, he was already involved in talks with the second-largest French automaker, Groupe PSA, according to the executive at Fiat Chrysler. But when its CEO, Carlos Tavares, appeared to blow off the possibility of a merger, Fiat Chrysler quickly shifted its focus to Renault.

Juul is exploring plans to open its own US stores
Facebook CEO Mark Zuckerberg dodges shareholder question about power
To Top
error: Content is protected !!