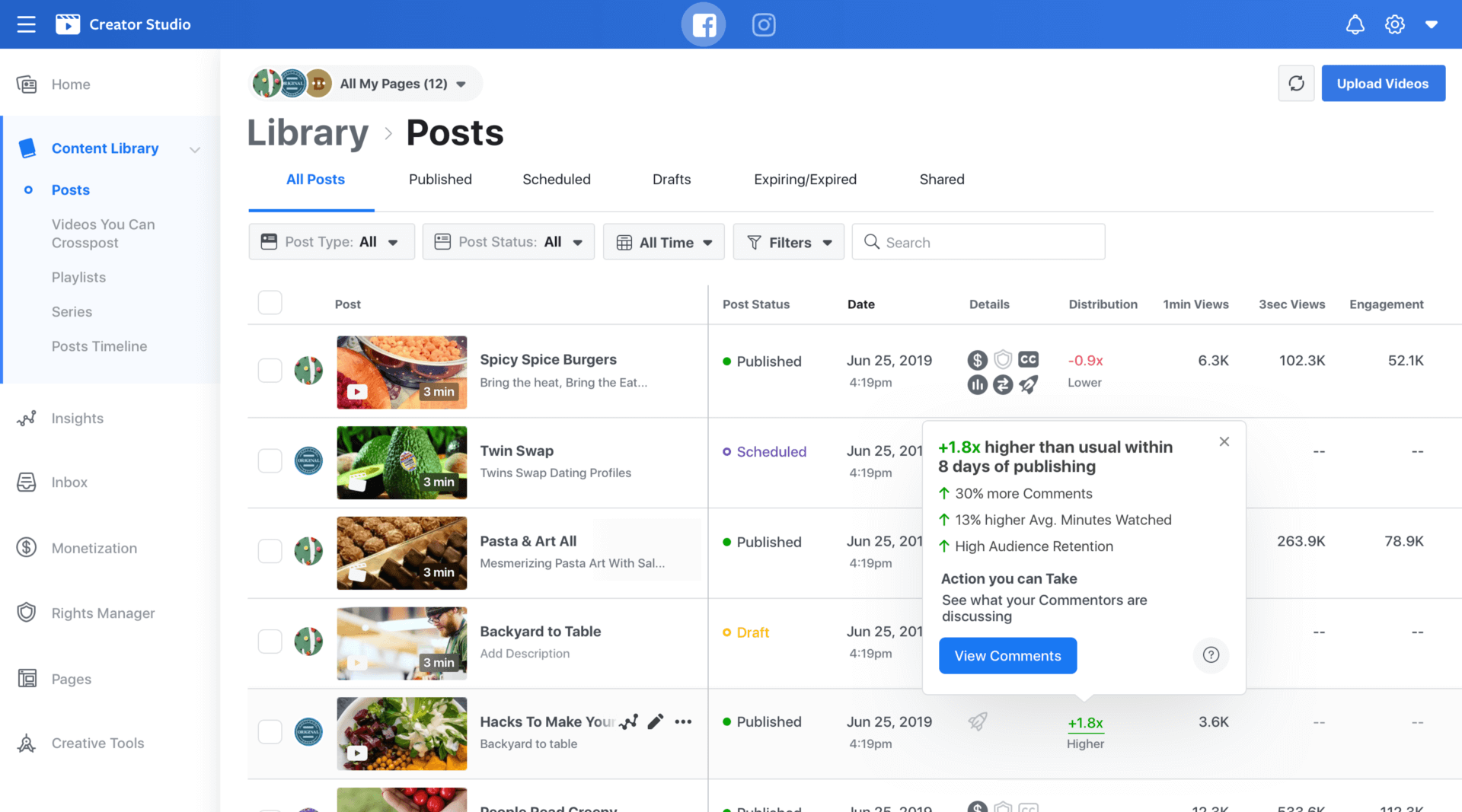 Facebook is releasing new features and metrics for its Live API, Watch Parties and within its Creator Studio, all of which can be used by marketers to advance their video efforts.“The features we’re announcing today were built based on feedback from our community of video creators and publishers,” writes Facebook Product Manager Erin Connolly and Head of Creator and Publisher Experience Jeff Birkeland on the company’s news blog. Facebook officially announced the following updates during its appearance at the International Broadcasting Convention in Amsterdam.“Rehearsals” via Facebook’s Live API. Facebook is making it possible for Page owners to publish Live video only to their Page Admin and editors with a new feature called “Rehearsals.” This will allow creators to test new production setups, interactive features and do practice runs for live broadcasts.Live video editing and steaming updates. Video creators on the platform are also getting a new trimming tool for Live video, allowing them to trim the beginning or end of a Live video. Facebook is also extending the maximum duration for Live broadcasts via the Live API from four hours to eight hours. (“We know that some publishers require longer broadcasting times to accommodate things like sporting events, news days and gaming broadcasts,” writes Connolly and Birkeland.)Facebook is also allowing video creators to broadcast their Facebook Live videos to more than one online streaming service using the Live API.Creator Studio adds Instagram and IGTV features. Facebook is making it possible for video creators to publish and schedule video content on Instagram and Instagram’s long-form video app IGTV. Page admins will be able to schedule video content on the Instagram platforms up to six months in advance via the Creator Studio, and Facebook reports it is working on new drafting and editing features for videos published to the Instagram Feed and IGTV which will be available in the coming months.Creator Studio is also expanding the number of languages it supports for auto-captioning within videos, adding 13 new languages that Pages can utilize via “just one click.” The new language offerings include:ArabicChineseGermanHindiItalianMalayRussianTagalogTamilThaiTurkishUrduVietnameseNew distribution and viewership metrics. Video marketers will also have a new Distribution metric within Creator Studio to measure a video’s overall performance. “A new Distribution metric…gives a score to each video’s performance based on the Page’s historic average on a range of metrics that drive distribution, such as 1-Minute Views, Average Minutes Watched and Retention.”New Watch Party viewership metrics. Pages that host Watch Parties will also have two new metrics within Creator Studio: Minutes Viewed and Unique 60s Viewers. The Minutes Viewed number reflects the total amount of watch time accrued during a Watch Party and the Unique 60s Viewers highlight the total number of unique users who watched a Watch Party video for, at least, 60-seconds.Loyalty Insights visualization feature. Page owners are also getting more visualization tools to show Loyalty Insights around video consumption. The new visualization in Loyalty Insights will show which videos are driving returning viewers to a Page.“These visuals enable creators to understand which videos their loyal fans want to see so they can create more of them,” writes Connolly and Birkeland.Watch Party branded content and replays. Page admins hosting a Watch party will now be able to tag their business partners (i.e. influencers they working with) within their branded content Watch Party events to allow all involved access to the Watch Party metrics. There is also a new “replay” feature that will let users view a Watch Party after it has aired.Why we should care. Facebook’s video tools and metrics help marketers fine tune their efforts, offering more ways to connect with users and more insights into the content that is delivering engagement. Being able to do small things — like rehearse a Live broadcast or schedule content six months out — not only expands a video marketers took kit, but gives brands more flexibility and control in terms of the video content they’re producing on the platform. About The Author Amy Gesenhues is a senior editor for Third Door Media, covering the latest news and updates for Marketing Land, Search Engine Land and MarTech Today. From 2009 to 2012, she was an award-winning syndicated columnist for a number of daily newspapers from New York to Texas. With more than ten years of marketing management experience, she has contributed to a variety of traditional and online publications, including MarketingProfs, SoftwareCEO, and Sales and Marketing Management Magazine. Read more of Amy’s articles.

Train with Google and Microsoft, only at SMX Advanced