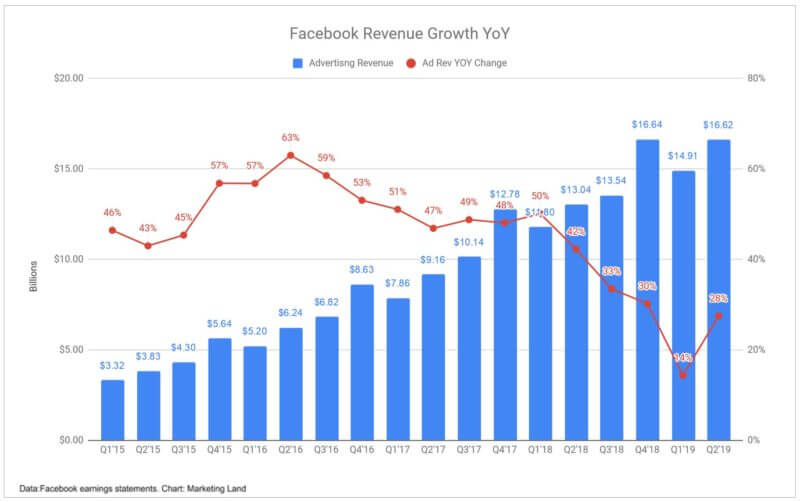 Facebook earned $16.6 billion in ad revenue for the second quarter of 2019, a 28% increase year-over-year. Facebook CFO David Wehner said the strongest ad growth on a regional basis belonged to North American and Asia-Pacific, both up 30%.

The company’s total revenue for the quarter was 16.9 billion. More than three times what the company has to pay as part of its settlement with the FTC over privacy violations.

Ad prices down, impressions up. Wehner reported that the average price per ad across Facebook’s services decreased 4% during the second quarter, while ad impressions served were up 33%.

DAU growth remains flat. Facebook’s daily active users (DAUs) saw another quarter of single-digit year-over-year growth at 8%, with 1.58 million DAUs during the second quarter. Wehner said lifts in daily activity was led by growth in India, Indonesia and the Philippines. 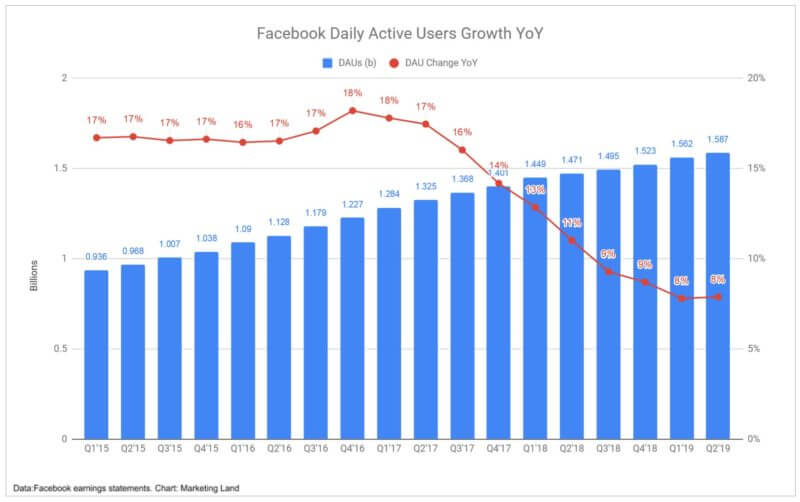 Monthly active user (MAUs) rates also saw an 8% growth rate, with 2.41 billion MAUs on average during the quarter. Across its family of apps (Facebook, Instagram, Messenger andWhatsAPP), the company reported 2.1 billion people visited, at least, one of its apps every day, and more than 2.7 billion visited, at least, each month.

Regulatory impact on Facebook. Earlier this month, Facebook received a $5 billion fine from the FTC as part of a larger settlement around privacy violations going back to a 2012 consent decree requiring the company to better protect user privacy. The company must also pay the SEC $100 million.

“These efforts will require significant investments in compliance processes, personnel, and technical infrastructure,” said Wehner regarding steps need to comply with the FTC agreement, “In addition, these efforts will make some of our existing product development processes more difficult, time consuming, and costly.”

And it continues to face ongoing investigations, as the company noted, “In June 2019, we were informed by the FTC that it had opened an antitrust investigation of our company. In addition, in July 2019, the Department of Justice announced that it will begin an antitrust review of market-leading online platforms.”

Why we should care. In spite of Facebook’s comments about having to slow down on product development processes, the company is still connecting advertisers to their audiences — driving ad revenue forward and designing new ways to bring e-commerce to its platforms.

“When I look at the kinds of private interactions we can make easier, payments may be the most important for the long term,” said CEO Mark Zuckerberg, “In the future, we’ll enable people to use the same payments account to send money to friends and businesses on WhatsApp, shop on Instagram, or make transactions on Facebook.”

Zuckerberg said being able to send money via its family of apps will be as easy as sending a photo, opening up new opportunities for businesses.

It’s not about your company: Why modern marketers need to be customer-centric
See the SMX East agenda
To Top
error: Content is protected !!