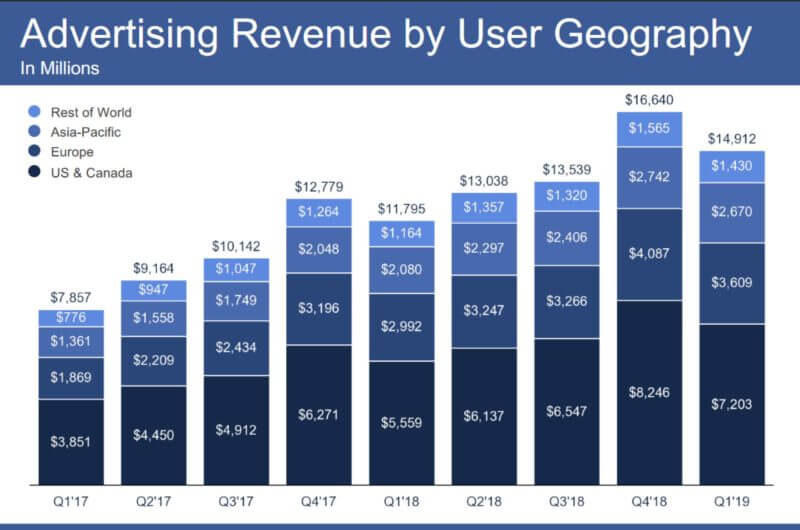 Facebook’s bet on Stories Ads looks like it is paying off.

Advertisers keep spending. Facebook’s ads business has yet to show any signs of serious impact from the company’s ongoing user privacy and data mishandling scandals– most likely because advertisers continue to see results. The average price of an ad decreased 4% during the first quarter of the year, while ad impressions (across all of its services) jumped 32%.

“Impression growth was primarily driven by ads on Instagram Stories, Instagram Feed and Facebook News Feed,” said CFO David Wehner. He said that the year-over-year decline in average price per ad reflects an ongoing mix shift towards Stories Ads and geographies that monetize at lower rates. According to the Wehner, Facebook saw the strongest ad revenue growth come from the U.S. and Canada at 30%.

COO Sandberg noted that the top 100 advertisers on Facebook account for less than 20 percent of the company’s total ad revenue. “Our advertiser base is more diverse compared to the same period over last year,” said Sandberg.

Wehner did say that Facebook expects overall revenue growth to decelerate sequentially throughout the year, with fallout from limitations on ad targeting to be more pronounced in the second half of 2019.

E-commerce initiatives. Sandberg referenced the company’s recent social commerce initiatives with the launch of Checkout on Instagram, a new e-commerce feature that rolled out to a select group of brands. The Checkout on Instagram feature delivers in-app purchasing capabilities for brands, making it possible to provide users with an ad that leads straight to a product purchase without having to leave the app.

The COO also noted the recent of expansion of Marketplace Ads to more countries and launch of Collaborative Ads (designed for brands without DTC channels so that they can run e-commerce campaigns connected to retailers).

User growth continued. In the face of all the reports and surveys claiming Facebook usage has flattened, the company has in fact reported daily active user growth for nine consecutive quarters now.

Facebook’s DAUs grew 8% year-over-over, reaching 1.56 billion during the first quarter of 2019. Monthly active users reached 2.38 billion last month, also up 8% year-over-year. Wehner said Facebook, on average, sees 2.1 billion people per day using at least one of its apps. Facebook’s DAUs in the U.S. and Canada have grown by nearly 50 million since the first quarter of 2018, now at 490 million.

Why we should care. Facebook is in a time of major transition. The company is centering its focus on moving from news feed to private, encrypted messaging — or what CEO Mark Zuckerberg continually refers to as the digital equivalent of a family’s living room.

“Our plan is to build this the way we’ve developed WhatsApp: focus on the most fundamental and private use case –messaging –make it as secure as possible with end-to-end encryption, and then build more ways for people to interact on top of that,” said Zuckerberg during the earnings call.

Advertisers who have relied on Facebook’s ad-targeting capabilities and wide audiences will have to adjust to what comes next, although Zuckerberg said that he doesn’t foresee the coming changes hurting the company’s advertising business. “It will strengthen people’s privacy without meaningfully affecting our business,” said Zuckerberg.

In the immediate future, it seems likely more advertisers will give the (for now) lower-cost Stories Ads a run.

IAB Tech Labs starts to replace VPAID with more interactive SIMID ad specs
We can’t live without digital media, but why would we want to?
To Top
error: Content is protected !!