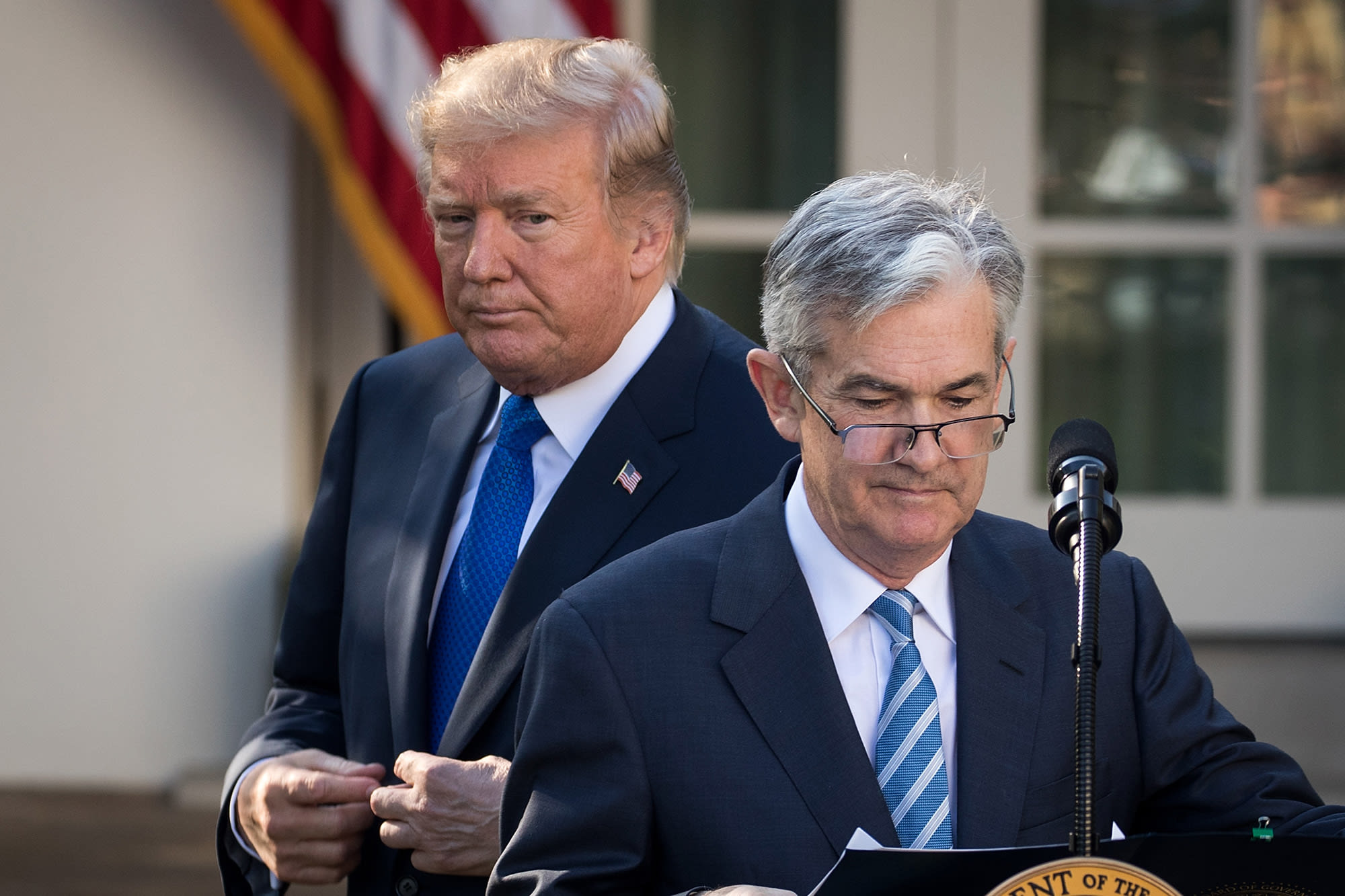 After a “monster good week” for the market, CNBC’s Jim Cramer warns investors to have their guards up ahead of the Federal Reserve’s highly anticipated policy meeting.”I’m concerned,” the “Mad Money” host said. “I worry that this market won’t be able to maintain its rosy hue, with the banks, the cyclicals, the transports, and the soft goods all moving higher when we have a difficult Fed meeting staring us in the face next Wednesday.”The market expects the central bank to approve another quarter-point rate cut at the conclusion of its policy meeting Wednesday.But Cramer says if Fed Chairman Jerome Powell can’t “find a way to thread the needle between fealty to Fed orthodoxy and presidential pressure simultaneously, this market could have a rough time of it.”Earlier this week, President Donald Trump continued his verbal assault on the Fed, tweeting that the central bank should cut interest rates to zero or even set negative interest rates. He also called Fed officials “boneheads.”More news is expected to come out next week, including details on WeWork’s IPO and earnings.Here’s what Cramer will be watching on the market next week:Monday: More details on WeWorkInvestors are likely to get more details on the “much lamented” WeWork deal, Cramer said.WeWork’s parent company announced Friday that it plans to make a number of changes to its corporate governance structure in advance of its much-anticipated IPO and amid growing investor concerns.CNBC’s David Faber reported this week that the IPO is still on track, and the roadshow for investors could start as soon as Monday. The valuation targets for WeWork continue to drop and could debut below $15 billion, sources told Faber.”The desperate nature of this underwriting has me spooked,” Cramer said. “The market can’t seem to bear even $15 billion for a company that was once valued at more than $40 billion. This whole WeWork deal makes me nervous.”Tuesday: Federal Express and Adobe SystemsFedEx and Adobe are expected to report earnings after the closing bell on Tuesday.FedEx: The last time FedEx reported earnings, management had some pretty negative things to say about trade, especially trade with China, Cramer said.”I think this company has a better handle on the global economy than the Federal Reserve or the Commerce Department or the White House,” Cramer said. “I doubt things have gotten better since last quarter, not when you consider all the trade tensions.”Adobe: The company is set to report earnings as the stock sits about 10% below its high, Cramer said.”I’m betting Adobe will deliver a strong quarter, as it’s at the epicenter of digital commerce and that’s the most robust part of tech,” Cramer said.Wednesday: Powell, General MillsOn Wednesday, the Fed’s Powell is expected to issue a decision on interest rates after the central bank cut rates in July for the first time in over a decade.”I really don’t envy Powell,” Cramer said. “On the one hand, he’s got the president calling him a bonehead for raising interest rates too quickly last year, which slowed the economy to stave off the phantom of nonexistent inflation.””If Powell eases, he’ll temporarily satisfy the president. But on the other hand, he’ll also look like he’s selling out the Fed, which is supposed to be independent,” Cramer added.General Mills will also report earnings before Wall Street’s open.”Now, I know the earnings will be a sideshow,” Cramer said .”But General Mills has been one of the hotter food stocks this year, up an astounding 38% because of some terrific execution by CEO Jeff Harmening.”Thursday: Darden RestaurantsDarden Restaurants, the parent company of Olive Garden, will report earnings before the opening bell Thursday.”Like FedEx with world trade, Darden gives you a great read on the state of the average American looking to order in, stay home or go out to dinner. I know I’ll be listening,” Cramer said.Friday: Trade update from Trump?While there are no earnings of note Friday, Cramer expects investors might be due for a trade update from Trump.”He’s been prone to offer his views about China in the afternoon,” Cramer said. “They’ve often left us puzzled, if not stunned, and I’ve come to dread the tweets about trade. All I can say is you’ve been forewarned.”

Jury finds J&J baby powder did not cause mesothelioma: Company