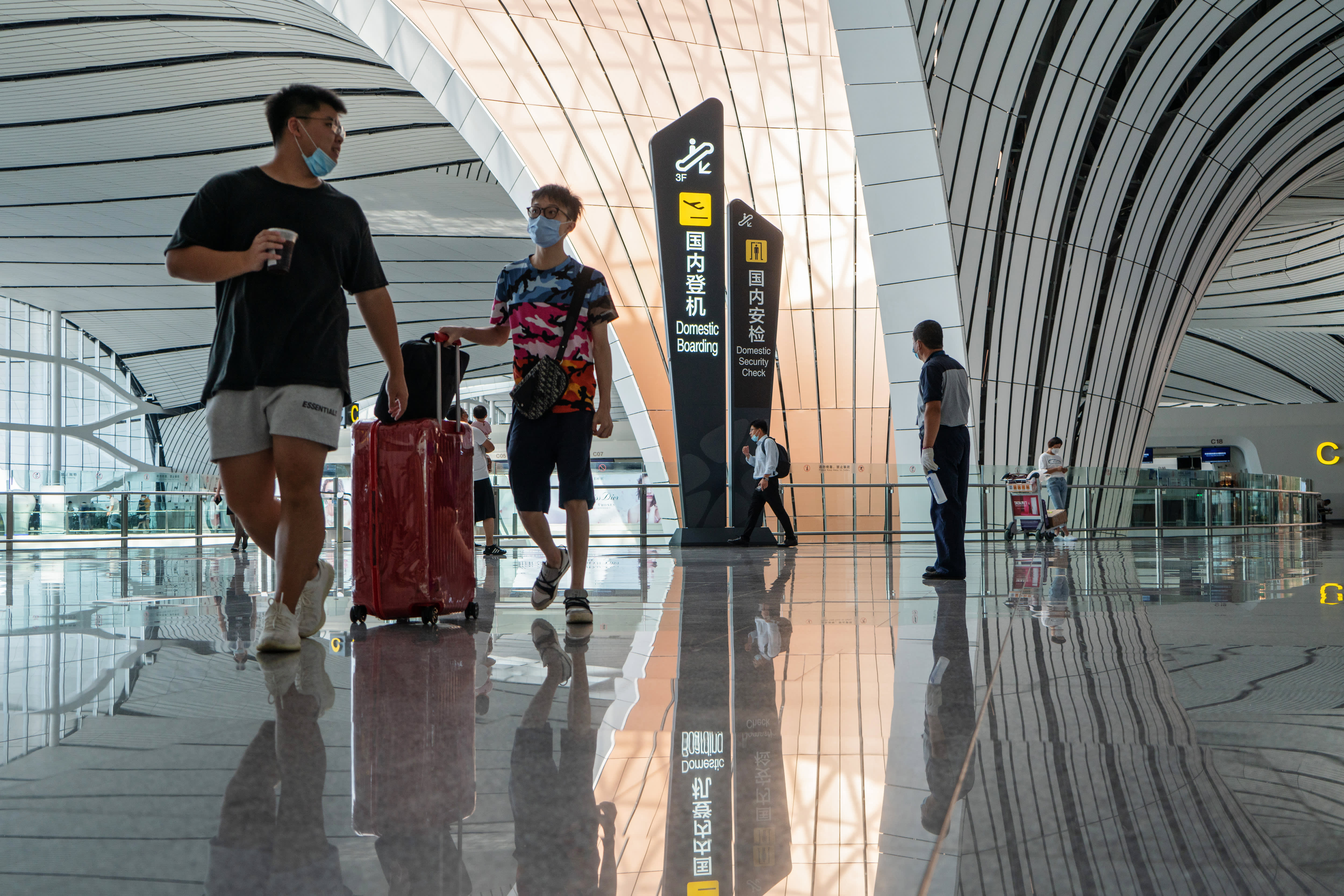 Travelers walk through Beijing Daxing International Airport in Beijing, China, on Tuesday, Aug. 25, 2020.Yan Cong | Bloomberg | Getty ImagesChina is making it easier for foreigners who have been inoculated with Chinese-made coronavirus vaccines to enter the country, after shutting its borders for international travel more than a year ago due to Covid-19.Multiple Chinese embassies around the world — including those in the United States, United Kingdom, India, Israel and the Philippines — issued notices on Monday outlining how foreigners can go about applying for visas to enter China.But the instructions only apply to those who have been fully vaccinated using Covid-19 vaccines made in China and have the vaccination certificate to prove it.To be clear, people with valid residence permits can enter China without new visas. Those without Chinese vaccines can also apply for visas, but they will need stronger reasons or specific documents in order to meet the requirements.Vaccine nationalism is a possibility that cannot be ruled out given the absence of further explanation.Chong Ja IanAssociate professor of political scienceChong Ja Ian, an associate professor of political science at the National University of Singapore, weighed in on possible reasons for China’s move.”Vaccine nationalism is a possibility that cannot be ruled out given the absence of further explanation,” he told CNBC in an email.Chong also said some observers suggest this is a way for China to get more usage and recognition of its vaccines or get countries to approve their vaccines more quickly.China has developed five vaccines, and 34 countries have approved at least one Chinese vaccine, according to CNBC’s calculations based on a Covid-19 vaccine tracking site.For comparison, the Pfizer-BioNTech shot has been approved by 72 countries, while the Oxford-AstraZeneca vaccine has been approved in 74 countries.Chinese vaccines have been met with some skepticism as information is less readily available compared to those produced by western pharmaceutical companies.Covid-19 was first reported in the China, in the city of Wuhan, before it spread to the rest of the world. The coronavirus is mostly under control in China now, but the country’s borders have remained largely closed to foreigners.Entry requirementsEach embassy’s notice differed in wording, but generally, foreigners from certain countries who have been fully vaccinated with Chinese vaccines require fewer documents to apply for visas. They are also allowed into the country for more reasons — though tourism is not one of them.For example, the Chinese embassy in the United Kingdom said those applying to enter for business purposes will no longer need to produce an invitation letter from provincial governments or departments of commerce. Those without a Chinese vaccine will still need to produce an invitation letter in order to apply, based on visa requirements announced in November.China also expanded the scope of those eligible to apply for a visa for humanitarian purposes. Those from the U.K. seeking to enter the country to reunite with family can now submit an application if they have taken the Chinese shots.Without the Chinese vaccine, foreigners from the U.K. can only apply to enter if a family member is in critical condition and in need of care, or if they needed to arrange for funeral matters in China.The country’s quarantine measures of up to 21 days still apply where relevant and negative Covid tests will need to be presented. Applicants should wait 14 days after receiving a Chinese-made vaccine before seeking a visa to enter China.