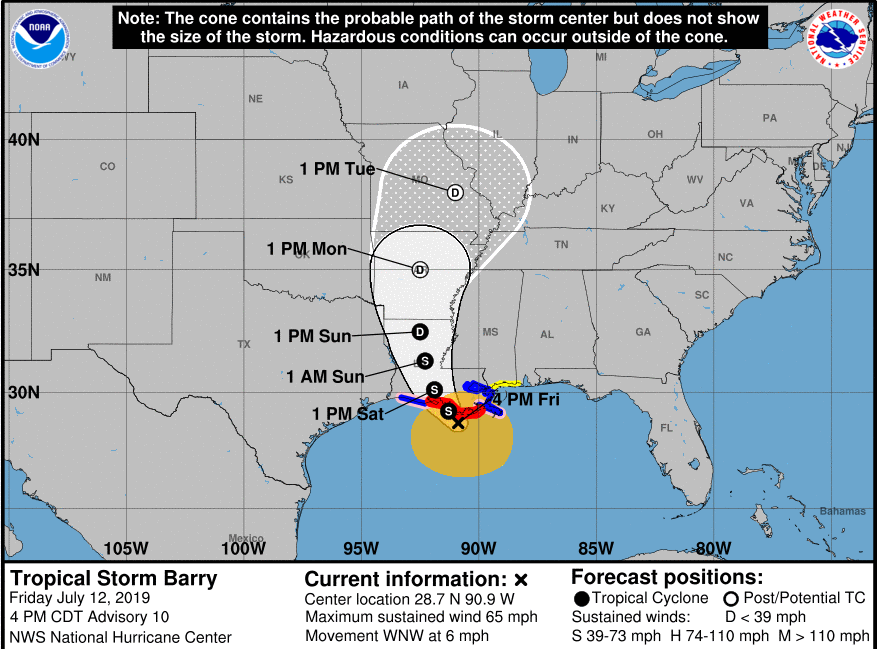 The energy industry shut down nearly 60% of oil production and half of natural gas out in the Gulf of Mexico, but heavy rains from Tropical Storm Barry make Louisiana’s refineries the most vulnerable energy assets in the storm.

The U.S. Coast Guard was closing the Port of New Orleans and lower Mississippi River as of 5 p.m. CDT Friday, officially stopping all commercial shipping ahead of the arrival of the storm. A Coast Guard spokeswoman said shipping activity has been mostly curtailed, but it was keeping the port open as long as possible to allow shippers to complete storm preparations.

Barry’s winds began buffeting the Louisiana coast Friday morning. The National Weather Service is warning of storm surge and heavy rains from the storm, which has the potential to become the first hurricane of the season.

“It is starting to get stronger as it moves toward the coast, as we expected. It’s going to make landfall [Saturday] along the central Louisiana coastline and can very well reach Category 1 hurricane strength as it reaches shore,” said Bespoke Weather chief meteorologist Brian Lovern.

Barry’s sustained winds were measured at a maximum 65 miles per hour early Friday, and the National Hurricane Center said it would likely strengthen to a hurricane with winds of at least 74 miles per hour by the time it makes landfall Saturday.

“Rain fall is still the big story as far as the potential for some really serious flooding across parts of Louisiana, especially the areas where the Mississippi River was already high, from Baton Rouge to New Orleans. The river is high in advance of the storm just because of all the rains we’ve seen in the Midwest,” said Lovern.

Barry is expected to bring six to 12 inches of rain across Louisiana and up to 18 inches or more in some areas, he said.

“As far as energy is concerned, I don’t think we’re talking about major damage, but you could certainly have some flooding at oil refineries. It’s not going to get strong enough where we’re talking about significant damage that’s going to be a long-term issue,” said Lovern.

If Barry becomes a hurricane, it mostly likely will be a Category 1 storm, with much less wind damage potential than other storms that have hit the area. But Barry is expected to bring a large amount of rain, and refineries in its path could be vulnerable to both storm surge and other flooding, which could keep personnel from reporting to work.

Just one refinery, Phillip 66’s 253,600 barrel Alliance, La. refinery, was fully shutdown ahead of the storm because it was located in an area under mandatory evacuation. There are three refineries in Lake Charles, La. and another 10 in New Orleans and Baton Rouge. Several refineries that were not shutting down were expected to cutback on operations.

“Most of the refineries are rated for a Cat 3 and have come through Cat 4 and 5 storms pretty well,” said John Kilduff, partner with Again Capital. “I’m more concerned about the flooding of the Mississippi down by its mouth because of all the water that was already coming down. I’m more worried about the shipping interests, and what it would do to both imports and exports and movement of supply.”

The oil industry has been moving tankers out of the area and shut down more than half the Gulf of Mexico’s oil production. The government estimates that as of Friday morning, 59% of current production, or 1.1 million barrels of oil per day, had been curtailed, as the industry evacuated workers in the Gulf. About 49% of all natural gas production had also been shut-in.

Analysts said the big impacts from Barry could be from rain, and if there is flooding from the heavy rainfalls that could impact pumping stations and potentially some refining operations.

“It’s all about logistics on this one and since we’re doing a lot more importing and exporting, that’s really the crux of the issue this time around,” said Kilduff.

“We’re seeing 4 million barrels of non U.S. crude that could face delays getting into the south because of Barry. There were a couple of vessels, one called ‘Dubai Glamour’ that was carrying crude from Latin America, that showed a clear diversion this morning. It made a 180 (degree turn) to clear that path,” said Daniel Graeber, chief editor of Clipperdata. The ship was carrying about 500,000 barrels of crude from Columbia to the U.S. gulf coast, he said.

Graeber said Barry has arrived as fewer ships and much less oil are sitting in “floating storage” on the Gulf, compared to last year. Clipperdata estimates 2.3 million barrels a day has been on ships in the Gulf in July, down from 14.7 million barrels last year.

“I would just say the U.S. is not really drawing in as much foreign oil as it had been,” he said.

Graeber said Clipperdata expects the federal government to report total U.S. crude exports of 2.3 million barrels a day in its weekly data Wednesday, 729,000 barrels less than last week due to the impact of Barry.

Graeber said he also expects the gulf coast area to report slightly more crude imports, and most of those barrels would be unloaded in Texas, away from the storm zone. Last week, the gulf coast reported imports of 1.9 million barrels and that could increase by 71,000 barrels a day this week.

Mike Bradley, energy strategist with Tudor, Pickering, Holt said the burgeoning U.S. crude export business should see just a slight disruption. Of the industry’s 5 million barrels a day export capacity, just 700,000 barrels are in Louisiana with the bulk in Texas.

“I would say we’re not expecting more than 1 million barrels (of crude) to be affected,” said Bradley. He expects about the same amount of imports to be impacted, or delayed by Barry.

“The refineries that are going down are not going to take crude. The ships are going to be sitting in the Gulf and hovering around until the refiners take shipments. The imports could be affected by several days, a week at most,” he said.

Bradley said he expects the industry to return personnel to offshore rigs as soon as it is safe.

“They’ll probably be out there in the next 24 to 48 hours, putting crews back,” he said, noting the loss of oil output is not huge. “It’s a blip unless there’s damage.”

The industry is not anticipating longer term disruptions from Tropical Storm Barry, but the amount of flooding that comes with the storm could be the wild card, with some forecasts for 20 inches of rain in some spots.

Kloza said the refineries have extensive plans for storm-related outages, but they do not include them in any preset schedule. They do plan for seasonal maintenance which is done twice a year before and after summer gasoline production. “They don’t plan to go down in the middle of the season,” he said.

Most refining operations in the area are expected to remain running. Reuters reported that Royal Dutch Shell’s refineries in Norco and Convent, La. plan to remain open, and Exxon was taking steps to minimize the risk of heavy rains for its workers and equipment.

While some refiners were cutting back on operations, the process of actually shutting down is much more involved and would take several days to resume if any others have to close.

Kloza said he is watching for possible announcements from two other refineries in Lake Charles. One is owned by Citgo, the other by Phillips 66.

Paul Sankey of Mizuho notes there are refineries with capacity totaling 1.8 million barrels a day in the potential path.

Like other analysts, Kloza said the storm may not damage much energy infrastructure but it will wreak havoc with the government’s weekly oil market report, watched by the market globally for its supply/demand data. The next report is due Wednesday at 10:30 a.m., and the data could be skewed by the storm. The data could be impacted both by the storm disrupting exports and imports. The industry may also not be as focused on supplying the data in the New Orleans area as it normally would be.

“It really screws up EIA reports next week and perhaps the week after that. We’re going to get some screwed up data. Also, we could get sweet crude go up in price at the Gulf Coast but Cushing doesn’t match it,” he said, suggesting the spot market on the coast could get bid higher than the price of crude at Cushing, the US storage hub.

Reuters contributed to this story

Amazon Prime Day will put its one-day delivery promise to the test
Fred’s will closes 129 stores, here’s a map of where they are
To Top
error: Content is protected !!