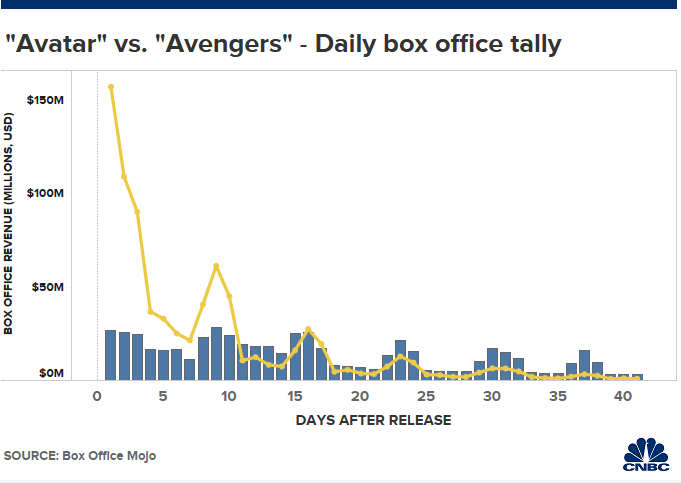 An Avengers fan holds tickets at the TCL Chinese Theatre in Hollywood to attend the opening screening of “Avengers: Endgame” in Los Angeles, California, U.S., April 25, 2019.

After its blockbuster start, some had expected “Avengers: Endgame” would go on to easily dethrone “Avatar” as the highest-grossing film of all time. But in the weeks that followed its record-setting debut, it appears unlikely — at least in its first run.

“Endgame” shattered any and all assumptions about what a movie can achieve at the box office. It was the first film to earn more than $1 billion in an opening weekend and the fastest film to reach $2 billion.

However, as “Endgame” exits its sixth week at the box office, its sales momentum has slowed so much that now analysts are questioning if it will be able to surpass “Avatar’s” $2.78 billion record.

“Endgame’s” current sales tally, $2.73 billion, is no small feat. However, The final $58 million the film needs to catch up to “Avatar” is not going to be easy to get, especially, as the summer box office season heats up.

Here are four hurdles “Avengers: Endgame” faces as it seeks to dethrone “Avatar:”

“Endgame” hit theaters in April, just ahead of the summer box office, and had two weeks with limited competition. During that time, it passed the $2 billion mark globally and $600 mark domestically.

However, in each of the following weeks, a major studio movie has been released — “Detective Pikachu,” “John Wick,” “Aladdin” and then “Godzilla: King of Monsters.”

Comparatively, when “Avatar” was released in 2009, it had 11 weeks between it and the next biggest blockbuster, “Alice in Wonderland.” And after “Alice,” “Avatar” really only had two major competitors — “How to Train Your Dragon” and “Clash of Titans” — for tickets before the summer box office kicked off with “Iron Man 2.”

“Endgame,” however, continues to face more competition at the box office. “Dark Phoenix,” the last installment of Fox’s X-Men franchise, hit theaters over the weekend and this week “Men in Black: International” is released. The week after that comes “Toy Story 4” and two weeks later “Spider-Man: Far From Home” arrives.

Of course, all films see a substantial decline between their first and second week. However, for “Endgame,” the drop off was particularly severe — 60.6% — because of how many people rushed out to see the film in its first two weeks. Demand was sparked due to fans’ desire not to have the finale spoiled for them before they got a chance to see it. Week three saw a drop off of 56% and the next week fell another 50%.

Looking at “Avatar,” the film actually saw a 6.9% bump in ticket sales from week one to week two, before dropping about 34% in week three.

Notably, the first time “Avatar’s” ticket sales fell more than 40% week to week was the opening weekend of “Alice in Wonderland,” 11 weeks after its opening.

And even then, the “Avatar” didn’t see a drop of more than 50% until mid-July when ticket sales fell 62% from one week to the next. This very consistent decline is one of the reasons that “Avatar” saw longevity at the box office and was able to eek out such a lofty total.

Additionally, it took 80 days for “Avatar” to fall below $1 million during a single day at the domestic box office. In just 39 days, “Endgame” slipped below that mark.

While “Endgame” has already surpassed “Avatar’s” domestic gross of $760 million — “Endgame” has earned about $818 million in the U.S. — it still has a ways to go before it will top “Avatar’s” global tally.

“Avatar” ran in theaters through August, a whopping 234 days. “Avengers” likely won’t stick around past Labor Day, especially if its ticket sales continue to decline at this rate.

“Endgame’s” meteoric rise to the top of the box office wasn’t luck, it was strategy. Disney coordinated its distribution so that the majority of the film’s opening weekend releases occurred in the same weekend.

The film debuted in more than 50 countries in five days. This allowed the film to gross $866.5 million internationally on the same weekend it earned $357.1 million domestically, leading to a haul of more than $1.2 billion globally.

Usually, a movie will debut in some countries one weekend and weeks or months later elsewhere. This differs based on what is opening and playing in foreign countries at the time a film studio is planning to release a movie. A lot of Disney’s decision to open in one weekend had to do with keeping spoilers and pirating to a minimum.

However, while this strategy made it so “Endgame” was the first film to ever gross more than $1 billion in its opening weekend, it also meant that the film wasn’t going to get any additional boosts from international ticket sales in later weeks.

While it’s likely that “Endgame” was going to make the same amount of money regardless of when the film opened in different countries, having a staggered release can prolong the film’s exposure to audiences and encourage repeat viewings.

There is no question that Marvel’s films are popular. Otherwise, there wouldn’t be so many of them and “Endgame” wouldn’t have reached the box office heights that it has reached. However, the audience for these films is actually quite niche.

Although there are some exceptions, the majority of Marvel movie fans are in their teens to early thirties and tend to be male. Each new film in the franchise draws those viewers back in droves, but the new additions don’t always entice other demographics.

Basically, if you aren’t already an established Marvel fan, you probably weren’t going to go see “Endgame” unless you were a parent taking your child or you were dragged in by your significant other for a movie night.

“Avatar,” on the other hand, had wider appeal. It was a spectacle film with revolutionary effects made by director James Cameron, who a decade before had wowed audiences with “Titanic.” The action-adventure, fantasy and sci-fi themes attracted younger audiences, while the ground-breaking visuals enticed an older crowd — even some that hadn’t been to the movies in decades — to theaters.

“‘Titanic’ and ‘Avatar’… defined the type of movie that would be successful for the 10 years after it was made,” Bruce Nash, founder and president of Nash Information Services, said. “‘I’m not sure if [‘Avengers: Endgame’] is that kind of landmark … it’s not drawing the parents and grandparents in the way that happened with ‘Titanic’ and ‘Avatar.'”

“I think that’s why it’s struggling to break the records,” he said.

It’s kind of a bummer

“Endgame” is an action-packed blockbuster, but it’s also got a lot of emotional — some would argue gut-wrenching — moments that could make repeat viewings difficult even for the biggest of fans, Shawn Robbins, chief analyst at Boxoffice.com, said.

While the dusted heroes from “Avengers: Infinity War” were resurrected, Tony Stark (Iron Man) and Natasha Romanoff (Black Widow) didn’t make it out of the blockbuster alive. Their deaths were devastating moments for fans and will have rippling effects in future films.

Already, “Spider-Man: Far From Home” has teased how much of an impact the loss of Tony Stark will be for Peter Parker and Tony’s long-time friend Happy Hogan.

Other emotional threads included Steve Rogers (Captain America) traveling back in time to return all of the infinity stones to their rightful eras only to remain in the past to live his life with Peggy Carter. As an older man, he passes his shield to Sam Wilson (Falcon).

Not the end for ‘Endgame’

All that being said, “Endgame” could still surpass “Avatar.” It just might not do it during its first run in theaters.

Films are often re-released in theaters during major anniversaries or milestones, as well as part of movie-watching marathons.

“Avatar” even got a second release, returning to theaters in 2010 and gaining an additional $10.7 million during that limited run.

It would not be out of the question for “Endgame” to do the same.

Amazon has thousands of people listening to snippets of Alexa chats

Some may think the market will soon top, but I’m not buying it